Genesis G90 Spied On Video Looking Stately At The Nurburgring

The flagship sedan looks graceful on the track.

Our spy teams recently captured high-resolution photos of the next Genesis G90 partaking in some mildly aggressive testing at the Nurburgring. Now, we have a video of the same test vehicle carving up the Green Hell, giving us another look while also showing how the large sedan copes with curves.

On that front, the G90 does turn corners but its role as a luxury sedan is first and foremost. This particular test vehicle isn't being driven too hard, but there's plenty of roll through the 'Rings infamous twists and turns. Still, it looks planted and willing to accept the actions, if not entirely thrilled about such things.

With the heavy camouflage now removed, we can see much of the now-familiar Genesis design language from the G70 and G80. The broad Genesis crest grille looks wider and shallower, and while the current G90 sports a split-beam style design for its headlights, the new version will have actual separation in there. We expect to see the same thing at the rear despite the single-lens look on this prototype. Some crafty camouflage wrap likely hides the rest of the rear LEDs.

More On The New Genesis G90: 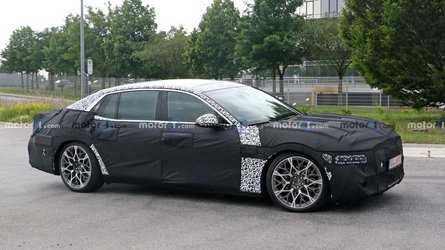 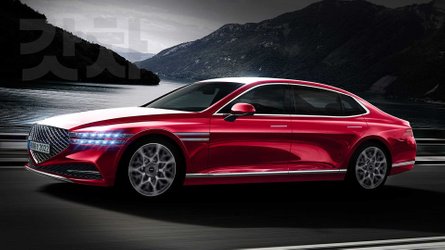 The overall style will certainly be familiar to G90 fans, as the new model's vision is evolutionary in nature. One thing likely not familiar to the G90 faithful will be the lack of a V8 engine under the hood. Nothing is confirmed yet obviously, but reports and rumors say the naturally aspirated 5.0-liter mill will give way to a twin-turbocharged 3.5-liter V6 packing around 380 horsepower (283 kilowatts). Expect significant updates to the interior as well.

With camouflage coming off, it's a sure sign that Genesis is planning a reveal sooner rather than later. Such things are also unconfirmed at the moment, but there's every reason to believe the next G90 will debut before the end of the year as a 2022 model.