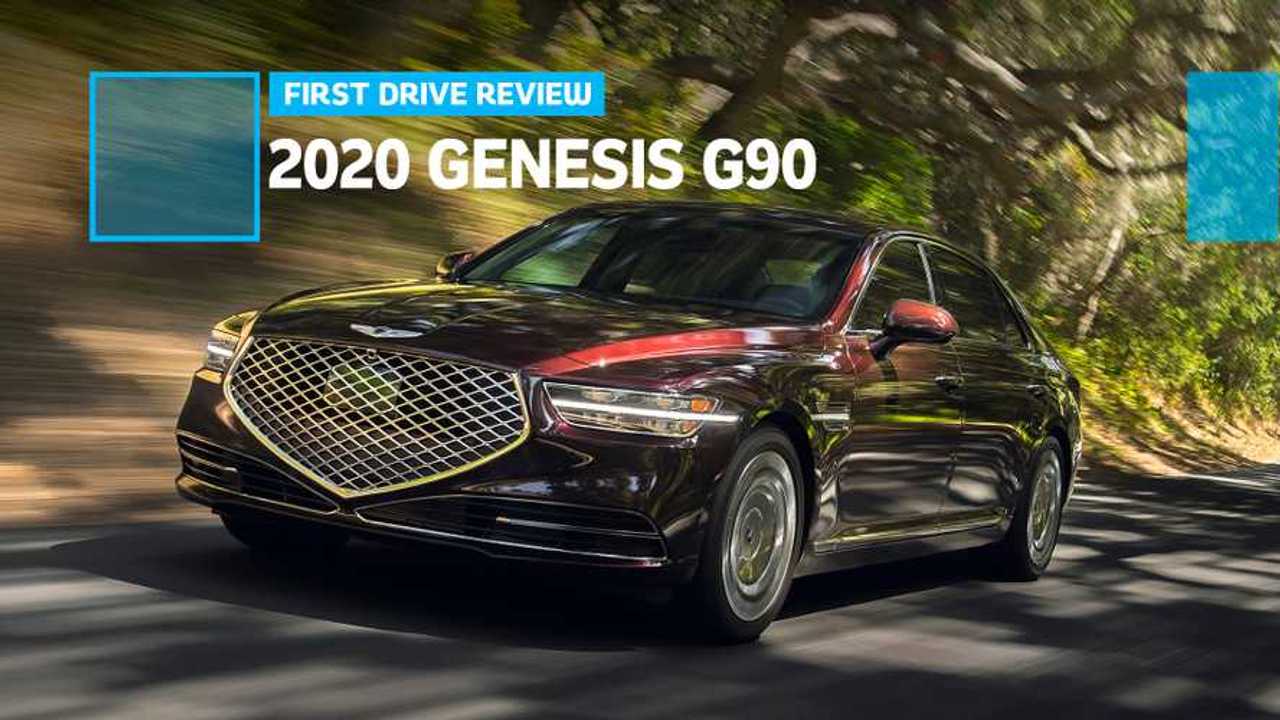 We enthusiasts are the worst. We moan and complain about performance and how it's the end all, be all of the automotive world. Automakers listen and develop cars, even the ostensibly luxurious ones, at the Nurburgring. Because God knows John Q. Public really appreciates progressive, predictable lateral weight transfer while driving his $70,000 luxury sedan to Wal-Mart.

No, we enthusiast should focus on luxury. Unlike performance, the things that make a car luxurious always matter: how comfortable the ride is, how isolated the cabin is, and how soft the seats are. Quality matters, whether you're hurtling down the freeway or sitting in traffic.

The 2020 Genesis G90 emphasizes luxury in a way that few "luxury" sedans do. It's purely and unabashedly focused on making its driver and passengers as comfortable and relaxed as possible. And now, the G90 looks the part, adopting expressive new sheetmetal that boldly proclaims its luxury intentions. So-called enthusiasts might hate its almost complete abandonment of performance or sportiness, but for discerning customers, the G90 is what luxury sedans should be.

Let Me See Your Grille

Yes, the G90 has a grille. A very large one. It's part of a comprehensive restyling that sees the G90 adopt a revised fascia, headlights, hood, fenders, rear decklid, taillights, and rear bumper. According to Genesis, only the doors, roof, and glass carry over from the previous G90. And despite the polarizing nature of the grille, the comprehensive restyling is a good thing.

The team at Genesis's Korean design studio has taken an anonymous full-size luxury sedan and given it not just a personality, but an identity. The grille, better in person than in pictures, dominates.But a number of less polarizing touches support it. The diamond pattern repeats across the sheet metal – it's in the headlights, side indicators, and taillight reflectors. Those new headlights remind us of Volvo's Thor's Hammer lights, which also include a turn-signal array bisecting the housing. Unlike Volvo, though, that strip of light wraps around the fender, adding to the sense of width created by the massive grille.

Where the G90's face polarizes, its side profile charms. This is a beauty with classic rear-drive proportions – the hood and dash-to-axle ratio are almost comically long – and suitably upscale side gills. Those sizable units house indicators that ape the headlight turn signals by stretching beyond the housing. These oversized indicators feel like a designer's pen flourish on a sketch, rather than necessarily functional elements. The multi-spoke 19-inch wheels, with their large centers, are rotating masterpieces. Genesis offers another wheel design at no additional charge, but you're mad if you get a G90 with anything but these ostentatious alloys.

A clean tail design represents a stark departure from the glitzy front end. We love the split between the taillights that starts in the fenders before opening in the decklid. The sizable “Genesis” script on the tailgate is solidly “meh,” but it is necessitated by the design team's decision to move the license plate down into the rear bumper where it belongs. The only other adornments to the decklid are a G90 badge and designations for the drivetrain and engine displacement.

With so many design changes, it's easy to misidentify the 2020 G90 as a redesigned model rather than merely a refresh. Let's make this clear: despite this car sharing just its doors, roof, and glass with its predecessor, the bits inside and underneath are subject to only minor tweaks.

That means updated materials in the cabin, but an unchanged layout. Frankly, the spattering of buttons on the G90's center console feel a little haphazard. The redundant dial for the infotainment system, and especially the controls for the heated and ventilated front seats, requires a minor act of contortion – the driver has to either tip their elbow up or pull their arm too far back.

The G90's seats are cushy and wide and offer 22-way adjustability, while the rears pack eight-way functionality.

The controls to the left of the pleasantly tactile electric shifter look and feel anonymous, and it took us more than a few minutes at the helm before we realized which button adjusted the drive modes. To bust out a tried and tested auto journalist cliché, things don't fall readily to hand.

These are minor quibbles in an otherwise impressive carryover interior. The leather is all of suitably high quality, with particularly nice stuff lining the dash. The matte wood trim looks fantastic, and Genesis's use of alternating colors is commendable. Our twin-turbocharged 3.3-liter tester wore lovely black leather on its seats, but contrasted it with matte wood, brown leather on the upper part of the door and dash, and a brown, faux-suede headliner. Clean, contrasting piping plays neatly with handsome stitching on the seats. Our only other interior issue was a small one. Some of the buttons feature a handsome silver finish, while others are dull plastic and look like they came off one of the G90's lesser Hyundai cousins.

That issue, and the carryover design, doesn't impact the car’s overall comfort, though. The G90's seats are cushy and wide and offer 22-way adjustability, while the rears pack eight-way functionality. A tilt-telescoping wheel rounds out the adjustable options, although we found it didn't telescope quite enough for your long-legged author.

An interesting, if ultimately useless feature, is a smart seating position. Simply tap a button on the door and a screen pops up on the infotainment asking for your height, weight, and inseam. It then sets the seat up in the most ergonomic position. The system can also analyze your preferred seating position and rate its ergonomics, if you're looking to improve your posture. In our experience, though, the system seemed unsure of how to manage your author's larger frame, presenting a seating position that, while not uncomfortable, lacked thigh support.

Make no mistake, despite the presence of a Sport mode, the G90 is a cruiser. Throw the car into a bend too aggressively, and it protests with emphatic body roll and flashy lights in the instrument cluster from the onboard nannies. Genesis tuned the adaptive dampers and five-link front and rear suspensions more toward comfort than anything else, and the duo managed the occasionally pockmarked canyon roads sprinkled throughout our Los Angeles testing area with ease. Despite 19-inch wheels, the G90 controls road noise exceptionally well. Very little engine noise enters the cabin, as well.

That doesn't mean the two engine options lack oomph. The range-topping 5.0-liter V8 (420 horsepower, 383 pound-feet) is a likable, if old-school, approach to luxury. Power arrives in hearty dollops, with plenty of punch throughout the rev range. We preferred the twin-turbocharged 3.3-liter V6 (365 hp, 376 lb-ft), which Genesis expects to sell in 75 percent of G90s going forward. Its ample low- and mid-range punch present a more effortless driving character that better suits a big luxury sedan, even if the acoustical note lacks the presence of the V8.

Both engines work alongside an eight-speed automatic transmission that makes up for its slow shifts with impressive smoothness while changing gears. Power goes either to the rear wheels or all four thanks to an optional all-wheel-drive system, which is available with both engines. There are paddle shifters on this car, but we highly doubt most G90 owners will ever select their own gears. The eight-speed auto simply doesn't need its driver’s input.

To put a point on that fact, the G90 comes with a wide array of active safety gear. Every version comes standard with adaptive cruise control, lane-keeping assist, and forward collision warning with automatic emergency braking. The 2020 G90 builds on these systems with a lane-centering function that works well. In fact, while testing on LA's myriad highways, the active safety systems managed for roughly a full minute before the car demanded we take the wheel – neither we nor Genesis recommends using the systems this way, but we mention it simply because the sophistication on offer is impressive.

That's true of the broader G90, as well. This is a big, pleasant luxury sedan in a mold that's become increasingly uncommon. Like the previous G90, this refreshed car continues to embrace a relaxed driving character and a pleasant cabin experience, but pairs it with a more expressive, eye-catching exterior. We don't know how much that new blend will cost, though.

This is a relaxed, poised luxury sedan that's always been a worthwhile value proposition.

Genesis hasn't released pricing for the 2020 G90 ahead of its on-sale date later in December. The first cars are en route to the west coast, though, so we won't be waiting long. When they finally land, we're expecting prices to largely stick to what they were for the 2019 model. That means a rear-drive V6 should start at around $70,000, while a rear-drive V8 will come in around $75,000.

That's a fair sum for a vehicle as single-mindedly focused on comfort as the G90. This is a relaxed, poised luxury sedan that's always been a worthwhile value proposition. Now, it has the style and outward character to match. Certain elements won't appeal to everyone – we strongly recommend judging that grille in person rather than in pictures – but as a vehicle for the driver that simply wants to be comfortable all the time and everywhere, the 2020 G90 excels.