The G90 is a relatively affordable, appealing alternative to the established crop.

You know the major players when it comes to full-size luxury sedans: Audi, BMW, and Mercedes-Benz – you might even be able to throw Lexus into the mix. And there’s a reason those brands are so successful: because their full-size options are very good. But of the outliers, the 2020 Genesis G90 might be one of our favorites.

Not only does the new Genesis G90 look great (even if this latest model is just a heavy facelift), but it does almost exactly what its competitors do, only at a more affordable price. The G90 is stylish, luxurious, and loaded with some really good tech – all for under $80,000 as tested.

The Genesis G90 has an undeniable presence. The huge shield-shaped grille is the main focal point, accented by two larger vents just beneath it and sharp LED headlights. We won't go so far as to say the front-end of the G90 is pretty, but it certainly helps the big sedan stand out in a crowd.

The rear end is more conventionally attractive, with a split taillight design and a full-width light bar just below the elongated “GENESIS” word mark across the trunk. Plus, the dual exhaust tips have a similar shield shape to the grille, which is fun. And if all that doesn't do it for you – the 19-inch wheels alone should sell you on the G90's looks. The big, retro center caps and lace-like spokes are some of the best wheel design elements we've seen in ages.

The inside of the G90 doesn't have the same breathtaking opulence of something like an S-Class, but Genesis did manage to create a very clean, stylish cabin. High-quality leather, matte wood accents, and chunky aluminum fixtures are always within reach. At a minimum, the G90 looks and feels competitive from a quality standpoint. Our only issue (be it a minor one) is that Genesis ripped some of the buttons – like the climate control, for example – from lesser Hyundais. And the main infotainment rotary dial does feel a little flimsy.

Genesis didn't fall into the trap of trying to make its big luxury sedan sporty. In fact, the G90 is the antithesis of sporty, and it's better for it. This big four-door rides like it's on a cloud; the suspension soaks up any and all imperfections and flattens out even the most contentious speed bumps. The 22-way leather driver's seat cradles you like a Laz-E Boy living room chair, and there's a ton of room, both in the front and the rear. Plus, like any good full-size luxury sedan, the cabin is whisper quiet even at highway speeds.

Sure, the G90's 12.3-inch screen doesn't look as impressive as Benz's MBUX setup or BMW's latest version of iDrive. But it's one of the easier-to-use options in the class and offers a number of straightforward features. The home screen is clean and concise, with every selection assembled into an app-style boxed layout. There's a rotary dial that makes navigation to the left and right simple, and unlike last year's version, this one is a touchscreen. Our only issue is that the screen itself is set way back in the dash, which makes it hard to reach.

Things like a wireless charger, Apple CarPlay, and Android Auto do come standard. But unlike in the 7 Series, CarPlay and Android auto are both wired connections, and we found navigating CarPlay with the rotary dial to be a bit clumsy. But, this is also the first Genesis product with over-the-air updates for navigation maps and software.

The G90 also has an interesting “posture analysis" feature for the driver. Press the “Smart” button on the driver's side door, input things like height, weight, and pant size, and the car determines the perfect seating posture… or so it thinks. We found it to be very inaccurate, but it's at least a neat thing to show your friends.

Like we said: The Genesis G90 is not a sporty car, it is designed solely for luxury. And it does that well. The twin-turbocharged 3.3-liter V6 is a smooth operator, a stark contrast to how that same engine feels in the smaller and sportier G70. The 365 horses and 376 pound-feet travel to the rear wheels (in this case) and build gradually but with force. It takes a minute, but the 4,800-pound sedan moves in a straight line with decent speed. Those in search of more power, though, might want the optional 5.0-liter V8 – that engine produces 420 hp and 383 lb-ft and is smoother and easier on the ears to boot.

Unless you're in Sport mode, throttle response can feel sluggish and the transmission is a bit slow. Pressing the “Sport” button does improve both throttle and shift speed, but it still doesn't meet our mark of “sporty.” The steering is very light but could stand to be a bit more responsive, and there's some noticeable body roll. But again, the Genesis G90 was not made to take on corners anyway – it's a sublime cruiser above all else.

Standard safety features on the Genesis G90 include automatic emergency braking, lane-keep assist, rear cross-traffic alert, and the brand's Highway Driving Assist – which is essentially just an advanced version of adaptive cruise control. But while the distance control feature works well enough, keeping a steady pace to the car in front of it, the Highway Driving Assist feature doesn't feel as fleshed-out as what you get on some competitors. The G90 still ping-pongs more than we'd like and the lane-centering system doesn't activate right away – it takes more than a few seconds to read the lane.

With the standard 3.3-liter V6, the G90 gets 17 miles per gallon city, 25 highway, and 20 combined whether you choose rear-wheel drive, as tested here, or all-wheel drive. That's not as good, though, as some of its competitors.The Audi A8 with its base six-cylinder engine gets 21 combined, the S-Class with its standard engine gets 22 combined, the 7 Series with the same setup gets 24 combined. The G90 with the optional 5.0-liter V8 and all-wheel drive, meanwhile, gets just 18 mpg. 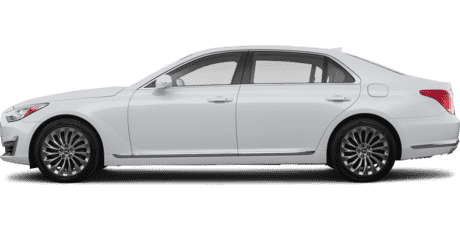