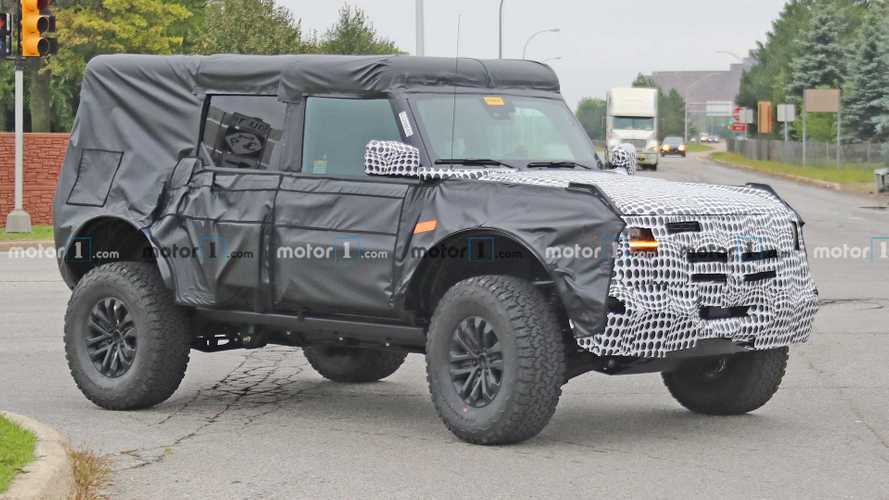 Those fenders look quite a bit wider.

A fantastic batch of new spy shots provides the first proper look yet at the development of the Ford Bronco Raptor. Rumors about the even more rugged take on the SUV have been swirling for a while.

Unfortunately, Ford's engineers keep the exterior of this Bronco under heavy covering. Particularly when looking at the SUV from the back, the fenders appear to stick out a lot farther than on the existing vehicle. Beyond this, the camouflage makes seeing other differences very difficult.

What's more obvious is that this Bronco is riding quite a bit higher than the Broncos we usually see. The exact boost is impossible to determine, but it appears to be several inches.

Another notable change is that there are dual exhausts slightly to the left of the center of the vehicle. This setup doesn't seem to be on other variants of the Bronco where the outlets are on the far right of the rear.

The shot of the rear axle highlights that this SUV is running different parts. The differential appears new, and there's a revised layout for the track bar. At the other end, the shocks seem to have a much larger diameter than the current pieces.

Ford Bronco Raptor All But Confirmed, And In An Odd Way

The powertrain for the Bronco Raptor (if Ford even calls it that) is still a mystery. One rumor suggests that it might use the twin-turbocharged 3.0-liter V6 from the Lincoln Aviator that makes 400 horsepower (298 kilowatts) and 415 pound-feet (563 Newton-meters) of torque.

A debut date for the Bronco Raptor isn't yet known. The leading rumor indicates the more rugged model would be available for the 2023 model year.