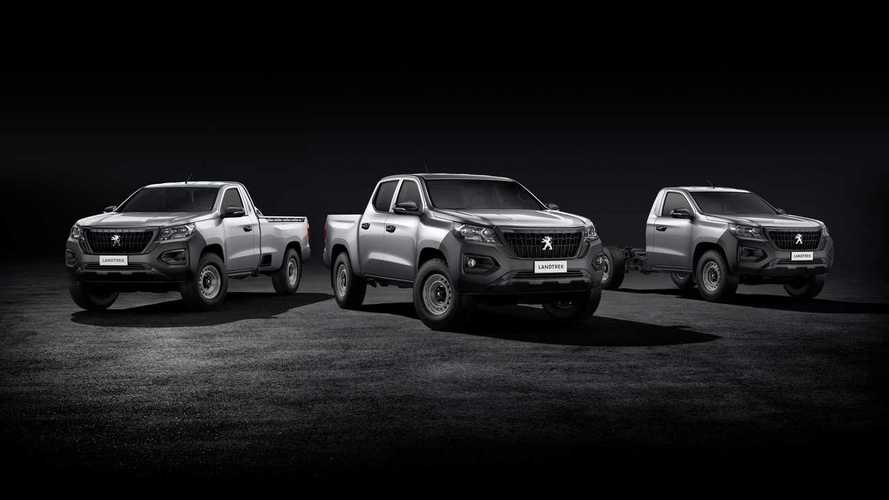 The one-ton workhorse can be sold without a rear bumper to provide a 180-degree opening of the tailgate.

Peugeot might not be known as a major player in the truck segment, but it has built some reputable workhorses over the years. Relevant examples include the 404 and 504 pickups, not to mention the 207-based Hoggar and a more recent model simply called “Pick Up” for the African continent launched nearly three years ago. The company with the lion badge is doubling down on its truck efforts with the launch of the more upscale Landtrek, a one-ton pickup initially for Latin America and Sub-Saharan Africa.

If you're wondering about the origins of the truck, the Landtrek comes to life as part of a collaboration between Peugeot and Chinese automaker Changan. It's based on a newly developed platform and has a sibling in the Changan Kaicheng F70 revealed nearly a year ago.

It follows the company’s highly praised design language and comes in three different flavors: single cab, double cab, and chassis cab. Peugeot says it will sell the Landtrek in “Workhorse” and “Multipurpose” versions with a wide array of accessories available for both professionals and families. All of them have a width of 1.92 meters (75.6 inches), with a 5.39-meter (212.2-inch) length for the single cab model and 5.33 meters (210 inches) for the double cab configuration.

The Peugeot Landtrek has racked up an impressive 2 million kilometers (1.24M miles) of testing on all types of surface and weather during the development phase and is set to offer a payload of up to 1.2 tons and a towing capacity of 3 tons. The Workhorse single cab model will be available without a rear bumper and thus offer a 180-degree opening tailgate, while on some of the versions the ground clearance can reach 235 mm (9.2 inches).

Available in both 4x2 and 4x4 configurations, the Landtrek will be powered by a 2.4-liter gasoline engine rated at 210 hp and 320 Nm (236 lb-ft) sent to the wheel via either a six-speed Getrag manual or a Punch automatic transmission with the same number of gears. The latter will provide the driver with the choice between three selectable modes: Sport, Eco, and sequential. There’s also a 1.9-liter diesel with 150 hp and 350 Nm (258 lb-ft) linked exclusively to the aforementioned manual ‘box and available in both 4x2 and 4x4 guises.

It wasn’t engineered to take down Nürburgring lap records, so the quickest version can do the 0-62 mph (0-100 km/h) sprint in 11.2 seconds for the 4x4 gasoline model with the automatic transmission, before maxing out at 110 mph (177 km/h).

Stepping inside the cabin, it takes bits and pieces from other Peugeot models, with relevant examples being the two-spoke steering wheel from the 3008 and the 10-inch touchscreen from the 508. It has arguably one of the nicest interiors in the pickup truck segment, with a choice between two independent or a three-seater bench up front. When folded, the rear seats can support a load of up to 100 kilograms (220 pounds) for even greater versatility further enhanced by 25 liters (0.8 cubic feet) of storage space available throughout the interior.

Peugeot will sell the Landtrek with a generous array of kit, including everything from automatic dual-zone climate control and LED headlights and taillights to trailer swing control. Up to four cameras will be available, including an off-road camera built into the rearview mirror on the passenger side. Safety systems will include hill descent control, six airbags, ESP, and lane departure warning.

Sadly, Peugeot doesn’t plan to sell the Landtrek in Europe.