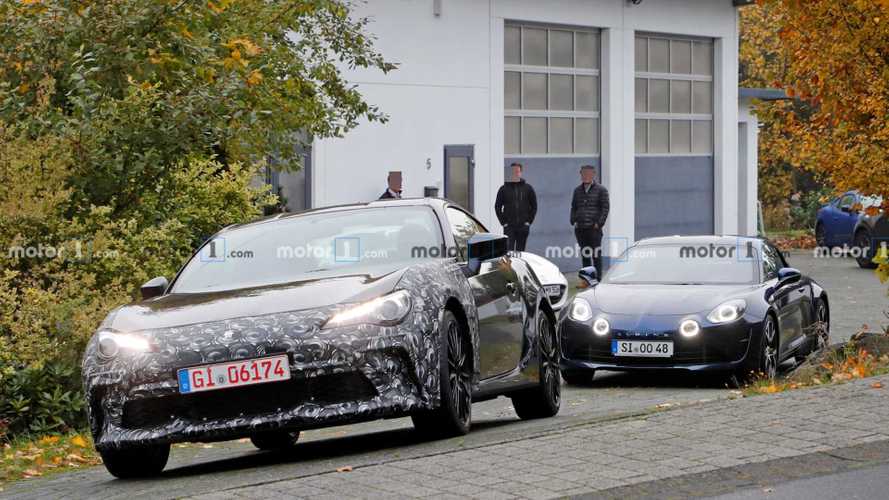 The Alpine A110 makes a guest appearance.

A new camouflaged Subaru BRZ has been spotted around the Nurburgring Nordschleife. The Alpine A110 was also spotted alongside the BRZ refresh.

All we know about the new BRZ is that this car is either a special edition or facelift of the existing model. Unsurprisingly, it’s hard to tell what is new with the camouflage on the car but we did spot some styling differences.

The front bumper appears to feature more aggressive styling with a larger central intake flanked by sharp vertical openings. We also spotted sizable brake ducts chiseled into the front fender with exit vents behind the front wheels. It appears that the style modernization has been carried over to the headlights as well. Transformations at the rear of the car are much harder to spot with the black paint and photo angles. That said, we did notice what appears to be an uprated exhaust system peeking out of the rear bumper.

Many petrolheads will know that Subaru has a rally racing history overflowing with success. Legends like Colin McRae, Richard Burns, and Carlos Sainz have driven for them and the brand has over 40 World Rally Championship victories to their name. That said, Alpine have had some success in rallying as well. They won the WRC championship in 1973 with the original Alpine A110.

Sat next to the BRZ prototype, it must be said that the Alpine A110 does look quite pedestrian. While it did derive its looks from the original car, it isn’t an exact copy. There were many road regulations the modern car had to satisfy which altered its beautifully delicate original styling.

Alpine A110 Rally Unveiled For 2WD Competition Beginning In 2020
⠀

While the A110 is powered by a 249 horsepower (185 kilowatt) 1.8-liter turbocharged inline four-cylinder engine, no information has been released on the engine configuration of the BRZ. We’d like to think that Subaru will go with their tried-and-true 2.0-liter flat four-cylinder configuration. As of right now we’ll still have to wait and see.

No lap times have been released from either of these cars but we’d love to see which one comes out on top around the Green Hell. Let us know below what you think of the A110 and BRZ.