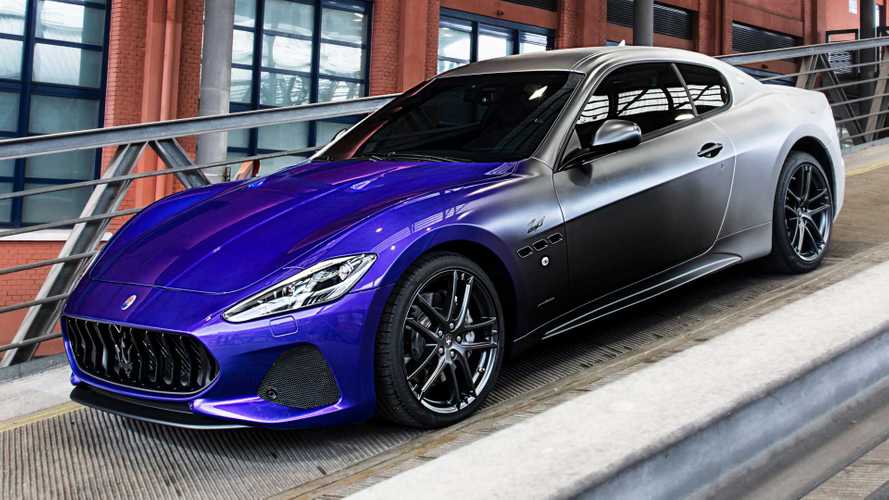 The Maserati GranTurismo and GranCabrio are officially dead. To commemorate the end of production, the company created the one-off GranTurismo Zéda that covers the body in a tri-color mix of blue, black, and white. The paint transitions between shades in a subtle gradient.

Maserati intends the change in color over this GranTurismo's body to be an expression of the company's transition into a new era. The finishes of the shades also evolve by going from a satin effect at the back to a high-gloss sheen at the front that the automaker calls a “metallurgic” effect.

These models have been a staple of the Maserati lineup for years. The GranTurismo debuted at the 2007 Geneva Motor Show, and the GranCabrio joined it at the 2009 Frankfurt Motor Show. The grand tourers featured designs by Pininfarina and a V8 engine co-developed with Ferrari. Maserati reports total sales of 28,805 units of the coupe and 11,715 examples of the convertible since they hit the market.

Get More Familiar With Maserati's Future:

Maserati Outlines Future With Lots Of Electrification On The Way

Zéda is the word for the letter Z in the local dialect of Modena, Italy. The company intends the moniker to show that "there is a new beginning for every ending" because the Viale Ciro Menotti factory is preparing to produce a new sports car in 2020 that should take inspiration from the Alfieri concept. Plus, the product plan has a new GranTurismo and GranCabrio with fully electric drivetrains eventually come from Maserati's plant in Turin.

Maserati has a busy schedule for the next few years. In addition to launching the new sports car, the Ghibli, Levante, and Quattroporte have refreshes coming in 2020. A new crossover, convertible version of the performance model, and the next-gen GranTurismo are coming in 2021. For 2022, there's the revived GranCabrio and the next-gen Quattroporte. A new generation of the Levante arrives in 2023.

GranTurismo Zéda projects Maserati towards the future: from the Modena plant the new era for the Brand begins

GranTurismo Zéda is the car created to celebrate the last day of production of the Maserati GranTurismo.
Zéda is the bridge which connects the past, the present and the future. It means “Z” in the Modena dialect, it pays tribute to Maserati’s roots and reminds us that there is a new beginning for every ending: Maserati starts for “Z” in anticipation of a new GranTurismo.
Renovation work has begun on the Modena Plant which will produce the new high-performance sports car as production of the Maserati GranTurismo and GranCabrio comes to an end.
The new GranTurismo and GranCabrio, to be produced at the Turin manufacturing hub, will herald a new era of electrification for the Maserati range of cars, constituting the first models to adopt 100% electric solutions in the history of the Brand.
Modena, 11 November 2019 – Maserati takes another step towards a new chapter of its story. The Brand will unveil a special GranTurismo Zéda to mark the end of production of the Maserati GranTurismo. The new car coincides with the Brand’s recent announcement to add more production innovation – as renovation work commences at the Viale Ciro Menotti plant in Modena - electrification and autonomous driving.

GranTurismo Zéda: from “Z” in anticipation of a New GranTurismo

Maserati unveils a celebratory car all set to tour the world in anticipation of the arrival of a new GranTurismo.

The unique model, sporting futuristic exterior shades designed by Centro Stile Maserati, tells the story of the dawn of a new era through colours and materials: GranTurismo Zéda is the bridge which connects the past, the present and the future of the Brand.

Observing the model from the rear section to the front, the surfaces change and become richer, shifting from a light satin finish to a burnished “metallurgic” effect.

The midsection slowly morphs once again, deepening all the way to Maserati blue. The blue also evolves, becoming energetic, electric, it seems alive, it seems like a mirror.

The finished overall effect is a masterpiece in the complex use and juxtaposition of vastly differing effects. Through manual skills we go back in time, with today’s technology and know-how constantly evolving towards the future.

The end of production of the Maserati GranTurismo and GranCabrio marks the beginning of a new path for the Modena plant. Work is already under way to update the production line in view of a total renovation that will see the facility devoted to the construction of the new super sports model, a high-performance car, characterised by state-of-the art technology and scheduled to launch in 2020. In parallel, work has already started on a paint shop, a completely new addition to the facility, equipped with low environmental-impact, innovative technologies and boasting a special design enabling customers to personally view their cars as they are painted.

Maserati GranTurismo since 2007 in the Olympus of the GTs

The GranTurismo, presented at the Geneva International Motor Show in 2007, represents a milestone in the history of Maserati. This four-seat, two-door coupé, with Pininfarina’s classic design and a naturally aspirated 8-cylinder engine, came into being as a modern interpretation of the Maserati A6 1500 of 1947, and has come to be considered, over the course of time, one of the most emblematic cars ever constructed by Maserati. In 2009, where it was debuted at the Frankfurt International Motor Show, the GranCabrio joined the GranTurismo.

After various updates, the GranTurismo saw its final and last version with the MY18, in which an efficient restyling effort improved the aerodynamics, ergonomics and infotainment systems. The MY18 offered the iconic coupé in 16 exterior colours. Also available were 14 light alloy wheels in six different designs, brake callipers available in nine colours, and Exterior Carbon and Exterior Body Colour packs. With the MY18 the GranTurismo and GranCabrio range included two versions distinguished by a powerful, distinctive identity: Sport and MC (Maserati Corse). There are more than 400,000 possible combinations. The Maserati GranTurismo represents the maximum expression of the Brand’s GT character thanks to the charismatic 4.7 litre Ferrari V8 engine capable of delivering 460 hp at 7,000 rpm and 520 Nm of maximum torque at 4,750 rpm. Innumerable successes have been tallied by GranTurismo and GranCabrio in the years from 2007 to today; more than 40,000 of the iconic cars have been sold throughout the world, of which 28,805 were GranTurismo and 11,715 were GranCabrio.

Maserati produces a complete range of unique cars with an amazing personality, immediately recognisable anywhere. With their style, technology and innately exclusive character, they delight the most discerning, demanding tastes and have always been an automotive industry benchmark. Ambassadors of this heritage are the Quattroporte flagship, the Ghibli sports sedan, the Levante, Maserati’s very first SUV, and the GranTurismo and GranCabrio sports cars. A range complete as never before, with petrol and diesel engines, rear and all-wheel drive, the finest materials and outstanding engineering. A tradition of successful cars, each of them redefining what makes an Italian sports car in terms of design, performance, comfort, elegance and safety.