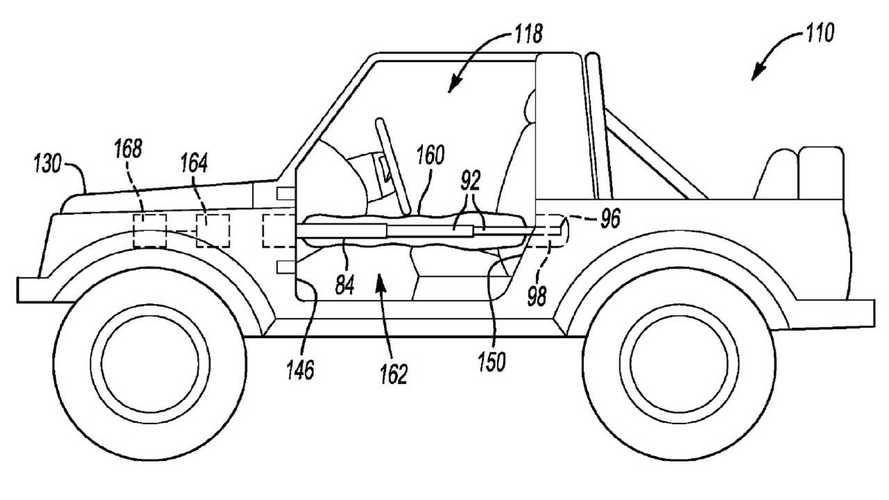 It could also get tubular doors that might have airbags.

We reported on a Ford patent application in March 2019 that was directly for removable doors. No specific vehicle name was mentioned, but the sketches in the filing were suspiciously reminiscent of the previous-generation Ford Bronco that disappeared in 1996. Widely circulated rumors have said the Bronco’s triumphant return will include a removable door feature, and since it’s slated to compete with the Jeep Wrangler, there’s strong evidence to suggest the rumor is true. Today we have additional supporting evidence in the form of another patent application from Ford, and it’s certainly interesting.

This time around, the filing doesn’t involve doors at all. Rather, the crux of this application involves “… an inflatable device that transitions between a less expanded position and a more expanded position.” That’s legalese patent-speak for an airbag, and to be more specific, an airbag that mounts in bars or a cage where a door was previously. Yes, it seems this patent application seeks to establish side airbags for a future Ford vehicle that still provides protection when doors are removed. See? We told you it was interesting.

The full patent application is at the U.S. Patent and Trademark Office, but the takeaway is that Ford is looking into various ways to offer side airbags either with a tubular-style door, or in a device that deploys with an airbag inside in the event there are no doors all. The diagrams suggest these would be smaller airbags, but airbags none the less. It’s actually a rather clever idea.

This is the point where we remind everyone that patent applications are far from gospel when it comes to future technology in vehicles. Automakers are constantly filing applications as ideas arise, simply to protect that idea should a future use be found. It’s certainly rather telling, however, that Ford is seeking to protect an idea for airbags on vehicles without doors. Ultimately, we should find out in a little over a year whether this comes to fruition, as we expect Ford to reveal the reborn Bronco in early 2021.