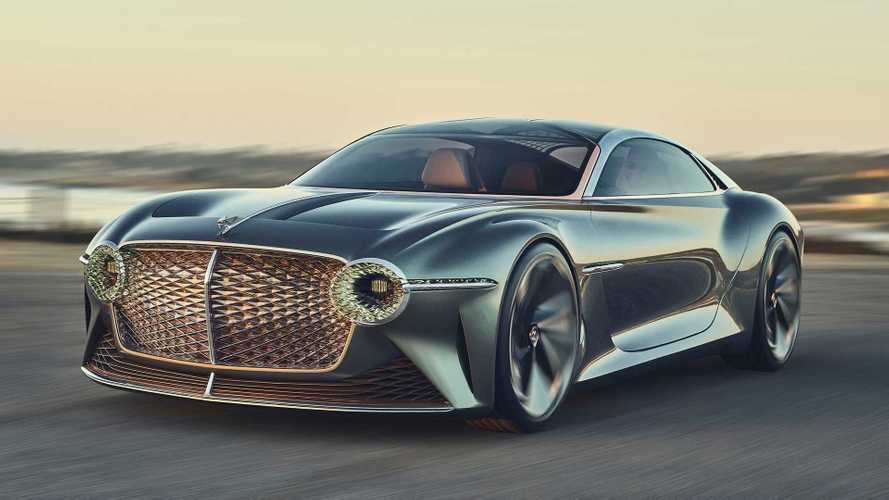 Bentley is celebrating its 100th birthday. But rather than revisiting the past, the company is looking toward the future with the electric, autonomous EXP 100 GT concept. Unveiled today at Bentley's headquarters in Crewe, the one-off concept imagines an ultra-posh grand tourer for the year 2035. And it's stunning from every angle.

Blending iconic Bentley cues with futuristic features, the EXP 100 GT concept has an imposing look. The massive mesh grille (made up of 6,000 LED bulbs), separated by a slim piece of copper, gives the front fascia an unmistakable expression. The rounded, beveled headlights ditch the traditional Bentley two-roundel setup for something more streamlined. But through it all, one identifying feature remains: the hood-mounted Flying B.

The remarkably sleek EXP 100 GT measures in at 19-feet (5.8-meters) long, 7.8-feet (2.4 meters) wide, and tips the scales at 4,188 pounds (1,900 kilograms) – even with aluminum and carbon fiber bodywork. The svelte, sloping roofline (inspired in part by the iconic R-Type Continental) extends seamlessly into the rear valance, copper and silver accents cover the window surrounds, windshield, and portions of the thick-spoked “Active Aero” wheels, and the silver roof offsets Bentley's stunning new "Compass" finish.

But this Bentley is more than a pretty face. Hiding under all that handsome bodywork is a 1,106 pound-feet (1,500-Newton-meter) battery-electric powertrain, which propels the EXP 100 GT to 60 miles per hour (96 kilometers per hour) in 2.5 seconds, and on to a top speed of 186 miles per hour (300 kilometers per hour). Even with all that power, the concept still manages a driving range of 435 miles (700 kilometers) on a single charge. Bentley also says that it can regain up to 80 percent power in just 15 minutes through fast charging.

The EXP 100 GT represents the kinds of cars we want to make in the future.

Driving the EXP 100 GT, though, is optional (theoretically). Bentley's artificially intelligent personal assistant – located in the center console and identifiable via an illuminated crystal, of course – controls five distinct autonomous driving modes. "Enhance" draws input from the outside, "Cocoon" envelops driver and passenger in purified air and opaque glass, "Re-Live" replays highlights of past journeys, and "Customize" combines all four, but is interchangeable based on passenger input.

The five non-driving modes mean passengers can sit back and bask in the upscale interior while keeping their hands off the wheel. The cabin, surfaced in a mix of leather, reclaimed wood with copper inlays, wool (yes, wool), and aluminum, is undoubtedly posh. But all of the materials used inside are environmentally friendly; Bentley calls is "sustainable innovation."

"The EXP 100 GT represents the kinds of cars we want to make in the future," Bentley’s director of design, Stefan Sielaff, notes. "Like those iconic Bentleys of the past, this car connects with its passengers’ emotions and helps them experience and safeguard the memories of the really extraordinary journeys they take."

Bentley has no plans to build the EXP 100 GT in its current form. But the radical concept serves as inspiration for Bentley design and technology moving forward.