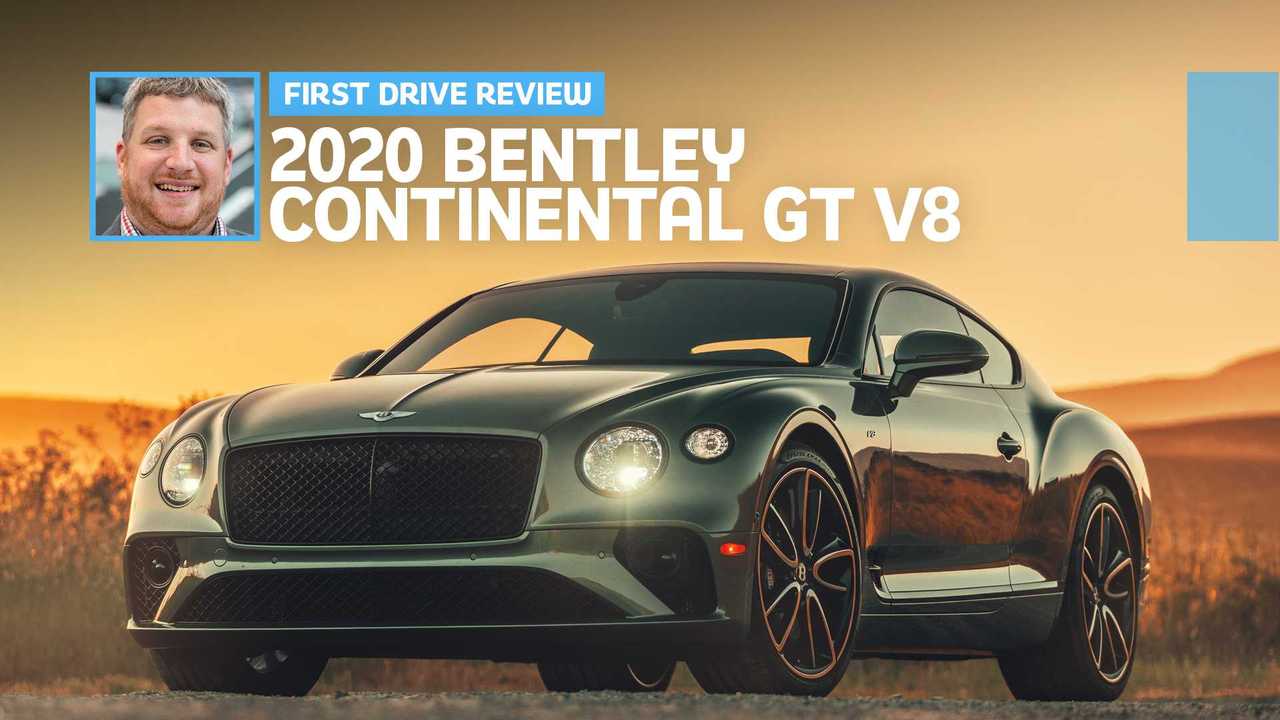 German engine be damned, this is a Bentley.

Did you know the British royal family is actually German? It's true, the House of Windsor used to be the House of Saxe-Coburg and Gotha, which sounds pretty darn Teutonic. So if you were wondering why Mary of Teck – Queen Elizabeth II's grandmother – spoke German in season one of Netflix's The Crown, there's your answer. While Germanic influence in a British institution might have been a point of controversy at one time (specifically during a few years in the 1910s), any connection between today's royals and Germany is a passing one.

The same is not true of the royalty in the British auto industry – Bentley and Rolls-Royce – where German influence is constant via their respective owners. Take the 2020 Bentley Continental GT, which already rides atop a German platform (the MSB architecture that underpins the Porsche Panamera sedan). With the debut of the Continental GT V8, that German inspiration goes even further. But much like the actual royal family, the Continental's roots don't matter.

That doesn't mean the 4.0-liter V8's output is any different in this iteration, though. The twin-turbo V8 packs 542 horsepower and 568 pound-feet of torque, just like the Porsche Cayenne Turbo, but a good bit less than the 650 horses of the Lamborghini Urus. With the Continental featuring Bentley's first dual-clutch transmission – an eight-speed unit – that sends its power to a standard all-wheel-drive system that can adjust torque distribution between the front and rear axles, the GT V8 Coupe can get to 60 miles per hour in just 3.9 seconds (the Convertible is a tenth of a second slower).

But talking about pure performance figures in a car like the Continental GT is a bit like belching in front of the queen. Instead, you should bow, curtsy, and bask in the presence of all that power and torque. The twin-turbo V8 is bruising off the line and effortless when accelerating at speed. Too often we looked down during our drive to a number well in excess of what the California Highway Patrol would deem prudent. The speed just creeps up, up, and up. Unless you stand on the throttle and force the dual-clutch transmission to drop a couple of gears, in which case the speed increases with all the subtlety of, well, belching in front of the queen.

Much like those ill-advised gastrointestinal fireworks, the Continental GT V8's exhaust always attracts attention. It's a bellicose boom under wide-open throttle, the sort of note usually reserved for cannon fire. Put the windows down or lower the fabric roof on the GT V8 Convertible and the hiss from the two twin-scroll turbochargers – both of which live in the valley between the cylinder banks – joins the audio ruckus. The sound of the turbochargers is the tornado to the thunder-like boom of the exhaust.

The sound of the turbochargers is the tornado to the thunder-like boom of the exhaust.

The V8 pairs with an incredibly capable eight-speed dual-clutch transmission that cloaks itself in Bentley's trademark refinement during regular cruising but is equally at home with Sport mode active and the metal paddle shifters at work. It's a little slow to respond when manual demanding downshifts and there are some histrionics on hills and with the start-stop system, but the eight-speed operates at such a high level in every other condition that we're willing to overlook a few small foibles.

The engine's output and the character of its exhaust allow us to indulge in one of our favorite auto journalist clichés: that the less powerful car is more likable. The Continental's W12 is a charmer in the way that all 12-cylinder engines are. It's grand and ostentatious and, most importantly, uncommon. But the V8 puts a smile on your face with a grander personality.

It also creates a more tossable, agile character. Even if the actual weight savings between the V8 and the W12 is a mere 110 pounds (4,837 for the V8 versus 4,947 for the W12), the V8 feels lighter and better balanced. While that's surely down to the lower total weight and better weight distribution, the Continental's brilliant chassis tuning is what allows us to take advantage of it the lower mass.

All Continentals feature a standard three-chamber air suspension with continuously adaptive dampers that deliver sublime ride comfort. Selecting Comfort mode is like settling into your favorite Chesterfield, as the Continental GT quashes any and all road imperfections. We'd pass on the optional 22-inch wheels, though – the GT V8 comes standard with 20s, but 21-inchers are the sweet spot. Even at higher speeds, there's an unshakeable stability that's hard to overstate. We expect such ride comfort in the Continental, but Bentley's excellent Dynamic Ride System – standard on the W12 but a $5,395 option on the V8 – promises agility most cars this big can scarcely dream of.

Essentially anti-roll bars powered by electric motors, the setup uses a 48-volt electrical system to quells nearly all body roll by pressing the outside wheel into the road while lifting the inside wheel slightly. The result is flat, predictable cornering that inspires extreme confidence while hustling the V8-powered coupe through roads more commonly suited for a Mazda MX-5 Miata. Combined with excellent steering that masks the Continental's heft without hiding it entirely, the Continental with the Dynamic Ride System might be the most engaging 5,000-pound car on the roads.

But it's neither the engine nor the handling that makes the Continental worth buying. Frankly, there could be a smoky outboard motor under the hood and the suspension could be from a covered wagon and we'd still be enamored by the Conti's style and quality.

Bentley has done a fantastic job of expanding on the Continental's exterior aesthetic with this current generation, but it's not obvious until you see a squadron of the things parked together. Stunning shades of paint, expansive wheel options, and different trim details mean making the Continental your own is easier than ever.

That's doubly true of the award-winning cabin, which exudes specialness from every surface. The leather is so good even a cow would give a nod of approval, and it's used so liberally that finding a surface not covered in hide is a challenge. Those few bits that aren't leather feature gorgeous woodwork (we're particularly fond of the optional two-tone veneer), while the Côtes de Genève center console finish is a must-have option, as well. It might be the biggest piece of real metal trim we've ever seen in a modern production car. Every knob features diamond-knurled metal surrounds, and we'll never get tired of adjusting the chromed climate vents or the pushers that open and shut them. The crown jewel among the Conti's many gems, though, is the three-sided rotating display, which can stow the infotainment screen and replace it with three beautiful analog gauges or, simply, an uninterrupted piece of veneer. It's incredibly cool.

The leather is so good even a cow would give a nod of approval.

The cabin is the strongest counter to folks that criticize the car’s Volkswagen Group-sourced platform and powertrain. While there are parts from a bin on this car, the Continental GT is hardly a parts-bin car. This Bentley is special in a way that a Panamera – good and likable as it is – could never be. But you're going to pay for that specialness.

The Continental V8 starts at $198,500 for the Coupe and $218,350 for the Convertible ($17,900 and $17,750 more than the W12 Coupe and Convertible, respectively), but we’re certain you won't be able to stop there. Take the stunning Alpine Green V8 Coupe featured in this piece. It carries $62,700 in options, and most of those we'd have a hard time saying no to, despite a $261,200 price tag that only includes the mid-range Bang and Olufsen audio system. The gorgeous $4,335 Continental Blackline Specification is a must for sportier colors like this dark mint shade, while the Touring Specification adds a host of active safety gear for $8,385. The priciest option, of course, is the $18,020 Mulliner Driving Specification. If you want diamond-quilted seats, a leather headliner, 22-inch wheels, and sport pedals, it's a must.

And that's the trick. Every touch, every detail, every turn of the Continental GT's steering wheel, feels like a thing you need. This car always feels special. And with the new V8, Bentley takes that specialness and makes it more affordable, more likable, and more approachable. This Bentley may have bits from Porsches, but the Continental GT is so good and unique that provenance doesn't matter.