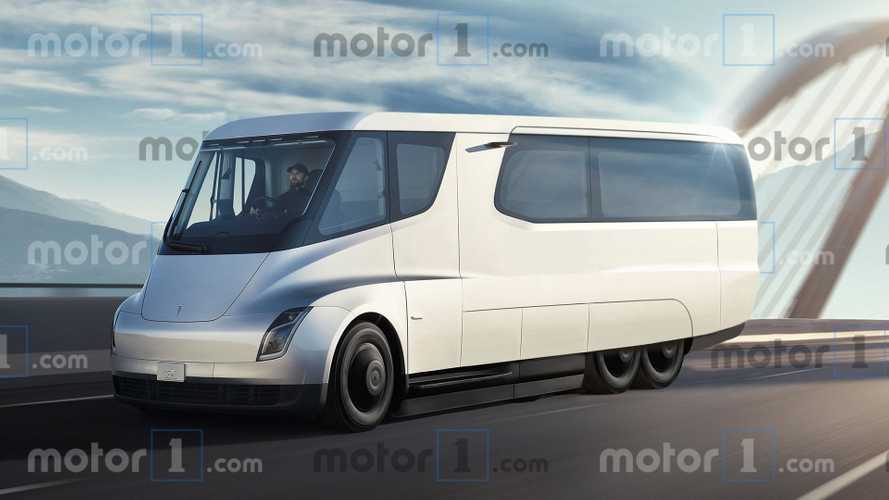 An electric RV based on the Tesla semi with 500 miles of range would make an amazing motorhome.

Tesla is coming up with new electric vehicles all the time to expand its portfolio. We think the world's first long-range, all-electric motorhome makes perfect sense for the brand's product pipeline, so we had our resident artist draw up what it might look like.

Check Out Another Tesla Motorhome Rendering:

Tesla already has a great platform on which to build an electric RV: the Semi. The Tesla Semi, unveiled last year, is meant to replace the many diesel-powered tractor trailers moving freight to and fro on our nation's highways. Because of the need to pull a massive amount of weight, the Semi has enough power and range to carry a tiny house on its back without breaking a sweat.

Let's look at the specs. The Semi will have a manufacturer-claimed maximum tow weight of 80,000 pounds, which means it's plenty stout enough to add the weight of mobile home over its rear axles. It's also available with either 300 or 500 miles of range, depending on the size of the battery pack. Those range estimates include towing a trailer, so they'd be even greater for an RV, which would presumably be lighter than the Semi with a loaded trailer.

Lastly, Tesla is estimating the Semi will cost between $150,000 and $180,000, again depending on which size battery pack is chosen. That's peanuts in the world of RVs. Many diesel-pusher RVs cost considerably more, which means Tesla could charge well over $200,000 for an electric RV and still be competitive price-wise (especially when its lower cost of ownership is factored in).

As for how it looks, the Semi is a slick piece of hardware because it needs to be. It has an ultra-low coefficient of drag for such a big vehicle because drag costs range. Converting it to an RV means extending the roofline and the length of Semi out past its rear axles to accommodate larger living quarters. Adding side skirts over the rear wheels and tall side sills would help reduce drag further. Still, the Semi would keep its centered driving position, digital rearview cameras, and tall entry doors.

What do you think? Let us know in the comments why you think Tesla should or shouldn't build an all-electric, long-range RV based on the Semi.