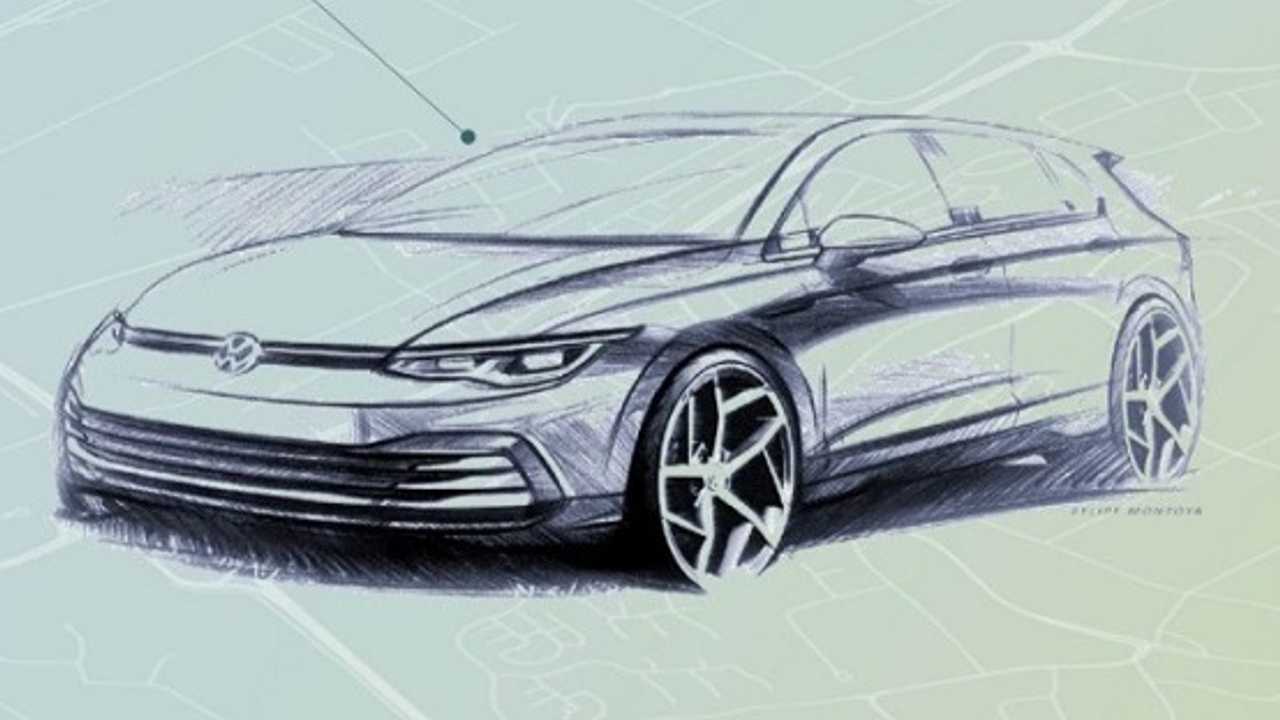 Here's your first official look at the next-generation Golf.

Rather than making a big deal out of it, Volkswagen decided to bury these two teasers deep into a 39-page PDF document about the company’s Annual General Meeting 2019. Aiming to once “again set the benchmark in the compact class,” the Golf 8 is being previewed for the first time with significantly revealing renderings showing the evolutionary exterior design and the revolutionary interior.

We’ve seen our fair share of spy photos with barely camouflaged prototypes out and about undergoing testing, so the sketch above is hardly a surprise. Bear in mind the styling is exaggerated as the roofline is unlikely to be this low while the wheels won’t be as large. Nevertheless, it’s nice that we finally have an official preview of the next Golf that gives us a pretty good understanding of what to expect from the real thing.

The other teaser is by far the most interesting taking into account VW’s promise to give the Golf 8’s cabin an unprecedented level of technology. As per a previous statement made by the peeps from Wolfsburg, the number of physical buttons has drastically decreased, with most of the functions being integrated into the touchscreen. The infotainment system sits right next to the fully digital instrument cluster, and while it’s not as large as the Touareg’s massive 15-inch touchscreen, it still has a more than generous size.

It’s hard to make out all of the details due to the image’s rather low resolution, but it looks like there are only four conventional buttons between the center air vents, plus another one in the middle for the hazard lights. Where are the climate controls you ask? Well, they’re probably built into the touchscreen, although drivers might have a more direct control judging by that row right underneath the display where there are blue and red lines probably for cool and hot, respectively. Maybe it’s a touch-sensitive strip of some sort akin to recent BMWs.

Lower on the center console is a large storage area covered by a lid, and we won’t be too surprised if the bottom of the compartment will double as the wireless charging pad for a smartphone. Above and below the small gear lever of the automatic transmission are several traditional buttons, with one of them being for the electronic parking brake. To the right, a vertical slot offers more storage.

As for the steering wheel, it’s packed with buttons to the left and right of the VW logo. Your guess is as good as ours regarding whether those are actual buttons or more touch-sensitive keys. Hopefully, the former. Below the many buttons on both sides seem to be sliders to control audio volume and whatnot.

Perhaps the most interesting bit is located to the left of the digital instrument cluster where there seems to be another display, unless it’s a touch-sensitive panel. It’s impossible to identify what the icons are showing, but those could serve as a replacement for the headlight switch the VW Group has been using for many, many years. Being a panel/screen, it should be configurable, so the driver might be able to change the shortcuts.

The aforementioned document confirms VW’s plan to reveal the new Golf in October, and now we know Wolfsburg will be the venue where the premiere is set to take place. From the very little info disclosed in the lengthy PDF, we get to learn the eighth generation will adopt a mild hybrid setup and is going to run once again on compressed natural gas for the Golf TGI variant. Aside from gasoline- and diesel-fueled versions and the CNG model, VW will also sell plug-in hybrids (notice we’re using the plural) with a maximum range in pure electric mode of 50 miles (80 kilometers).

There’s a lot riding on the new hatchback taking into account VW sold a whopping 830,000 units last year, prompting the company to say it represents the “key vehicle for our Group.” The next installment will be “fully connected” and will aim to set a benchmark “in terms of consumption and CO2 emissions, driving comfort, workmanship, and connectivity.”

According to our intel, the Golf 8 base model will not make it to the United States where only the hotter GTI and R are going to be available. The e-Golf won’t be renewed since it’ll be replaced by the ID.3 compact electric hatchback, while the future of the Alltrack is in doubt considering the regular SportWagen won’t be coming to the U.S.