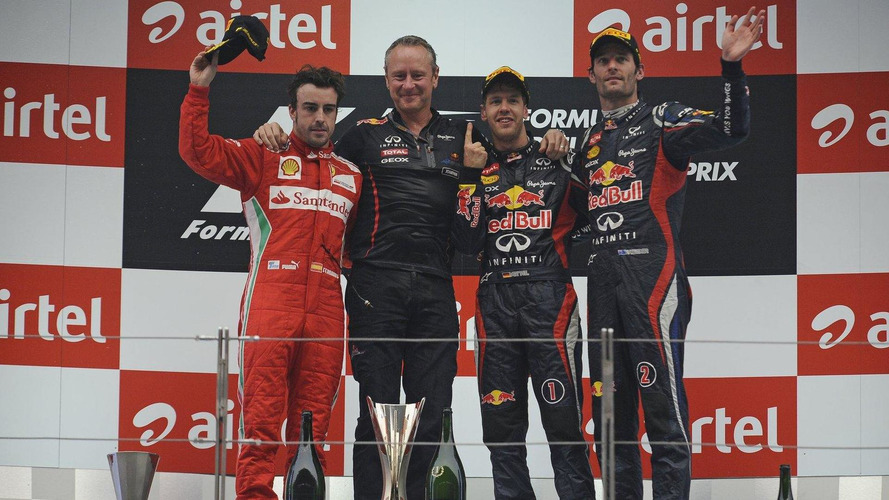 Fernando Alonso's points deficit to runaway leader Sebastian Vettel on Sunday grew from 5 to 13, as the German won his fourth consecutive grand prix in the now-dominant Red Bull.

Ferrari's Alonso needs to claw back 5 points on average at each of the remaining races in Abu Dhabi, Austin and Brazil, moving India GP podium interviewer Martin Brundle to ask Vettel if he can feel "one hand on the trophy" now.

The smiling German, of course, trotted out the customary line about taking one step at a time, but did admit: "This was another good step for us."

Spaniard Alonso drove an impressive race to split the Red Bulls on the podium, and said: "It's not easy to fight Red Bull but we will never give up.

"We want to be happy in Brazil, not here. I am sure we will do it."

It is obvious there are some psychological games being played now; the latest episode is Alonso's repeated characterisation of his title battle as a fight with Adrian Newey, not Vettel.

"All of us are working hand in hand," Vettel insisted on the podium, "whether here on the track or in Milton Keynes."

Vettel and Red Bull's designer Newey, meanwhile, rubbished the latest speculation about their futures at Ferrari.

"Yes, I can deny," the double world champion told the British broadcaster Sky, when asked if he has a Ferrari deal lined up for 2014.

"I don't have any agreement or obligation."

When also asked about a job at Ferrari, Newey added beneath the Buddh podium late on Sunday: "I think that window has been and gone."