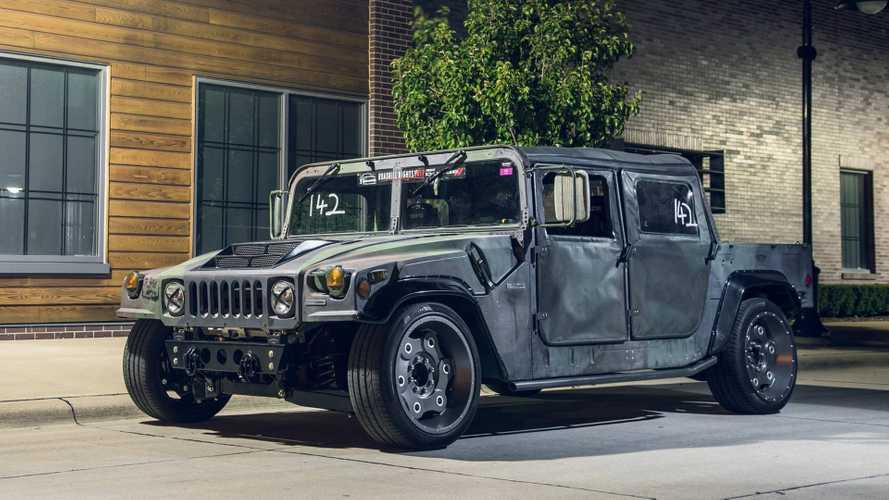 This 800-horsepower HumVee doesn't climb canyons, it carves them.

The classic fish-out-of-water story is about as clichéd as you can get, but that’s because it always works. Case-in-point, this massive Hummer H1 from Mil-Spec Automotive that was originally built to wade through nearly three feet of water and climb tall buildings with its massive tires and epic ground clearance. Fitted with a diesel engine built for torque and weighing slightly less than a 747, it’s not what you’d call the ideal track-day machine – unless portions of the Grand Canyon intersect the back straight.

Anything Can Be A Track Car, Including This Slammed Hummer H1

Admittedly, even with extensive modifications that effectively sever this H1 from its off-road nature, Mil-Spec’s one-off H1 (affectionately called the Track Titan) still isn’t what you’d call an ideal track-day dominator. It’s a hell of a lot better than you’d probably realize, however, and not just because it’s fitted with coilovers and lowered seven inches – which incidentally is more than the total suspension travel of most passenger cars.

Mil-Spec Built Its First Customer Truck, And It's A Hum-Dinger

It also gets extra reinforcement to stiffen the chassis, upgraded six-piston Wilwood brakes, a trick ARB Air locking differential, fat low-profile Pirelli rubber, and all the necessary gear inside to keep the driver in place and safe through high-g turns. Under the hood is a tweaked 6.6-liter Duramax diesel good for 800 horsepower (597 kilowatts) and an obscene amount of torque. It’s all handled by a stage 5 Allison 1000 transmission, and yes, it still has all-wheel drive capability, though that locking diff can make for some sideways tomfoolery.

Speaking with Ian Broekman at Mil-Spec about this epic creation, he reminded us that the original H1 actually utilized quite a bit of aluminum and maintained a decent distribution of weight – all the better for keeping upright in rough terrain. He doesn’t know the Track Titan’s exact weight, but it should fall in the neighborhood of the Lamborghini Urus so really, it's not that heavy after all. There’s also the H1’s four-wheel independent suspension, which if we’re honest wasn’t even offered on a freaking Ford Mustang until fairly recently.

For those who have visions of purchasing a Track Titan, this is sadly just a one-off demonstrator vehicle. The company is moving forward with customer orders on its more traditional H1 builds, but now that we’ve seen just how far outside the box Mil-Spec can get, we’re very interested to see what else is in the pipeline. In the meantime, jump over to Mil-Spec's page at the link below for the rest of the story on this crazy creation.