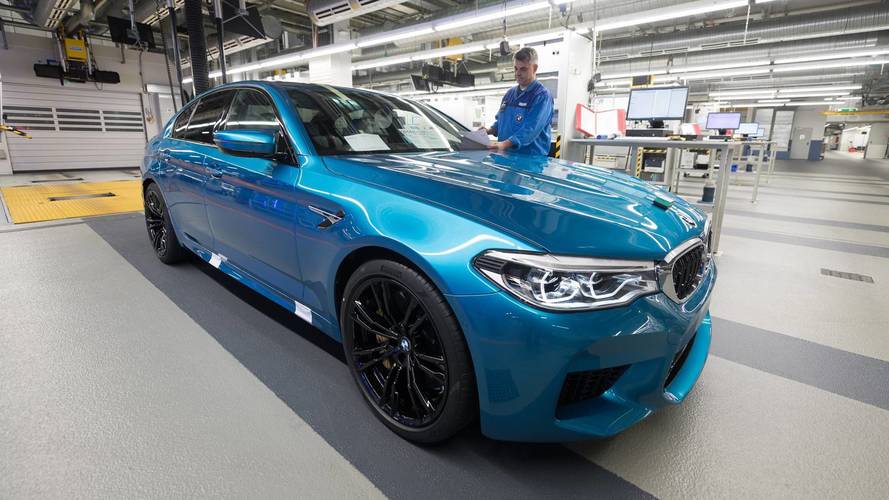 Would you have it in Marina Bay Blue or rather in this Snapper Rocks Blue?

The new BMW M5, the brand’s most powerful production high performance sedan in history, was revealed publicly in September this year at the Frankfurt Motor Show. Earlier this week it also became the most expensive M5 ever with a starting price of $102,600 (plus $995 destination and handling), making it $8,500 more expensive than the outgoing model. And now, finally, the mass production of the vehicle has started at BMW’s Dingolfing plant in Southern Bavaria.

The first manufactured examples will be handed to European customers, but U.S. clients won’t have to wait too long until they get their hands on the F90 generation of the sedan. Deliveries in Germany, UK and the United States will begin almost simultaneously in March 2018, and BMW aims to beat the previous generation's production record of about 20,000 units.

One of the first new M5s to roll off the assembly line is a stunning Snapper Rocks Blue car. This is one of seven colors offered for the model at no additional cost, while optionally available is a small selection of individual paints through the BMW Individual program.

The new M5 is not only more expensive than its predecessor, but is also better in nearly every possible aspect. It’s slightly lighter at 4,089 pounds (1,855 kilograms), more powerful at 600 horsepower (447 kilowatts) coming from an updated 4.4-liter V8 biturbo motor, and faster with a 0 to 60 miles per hour (0-96 kilometers per hour) acceleration in just 3.2 seconds. The new CLAR platform should ensure handling and overall performance is also improved.

At an additional cost, customers will be able to upgrade the standard model with features like Azurite Black Metallic paint ($1,950), full Merino leather ($3,500), and 20-inch M double-spoke wheels ($1,300), replacing the stock 19-inch wheels.