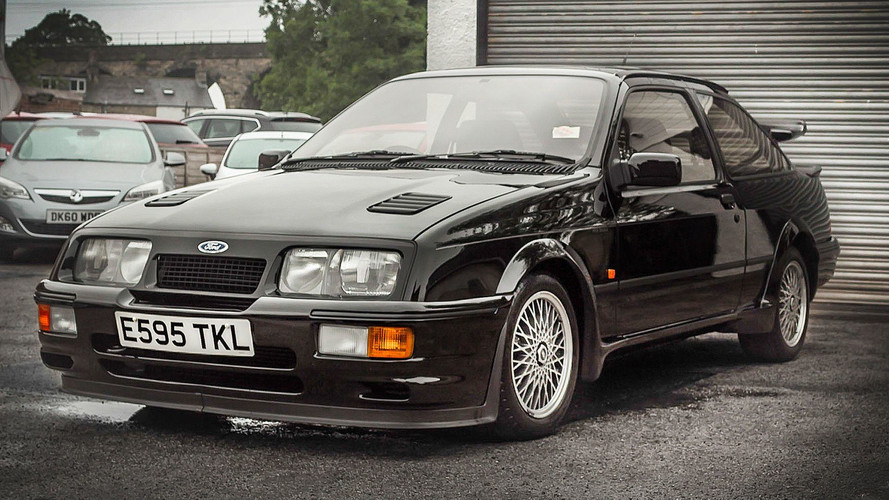 Only a few cars in this world have such an impressive “car-to-wing” ratio like the Ford Sierra Cosworth RS500. Only 500 of them were ever made and all shared the so-called whale tail. Most came in all-black like this one, but there were also a few painted in white and moonstone blue along with a single example finished in gray.

Although it wasn’t nearly as strong as its race car counterpart, the Cosworth-powered Sierra RS500 still packed quite a punch: 224 hp (167 kW) and 204 lb-ft (277 Nm) from a 2.0-liter engine featuring a Garrett turbocharger. For reference, the track-only version model pumped out a monstrous 500 hp, though higher states of tune took the engine to somewhere in the region of 570 hp.

Still, the road-going model with its RWD layout remains pretty quick even by today’s standards, with the 0-62 mph (0-100 kph) taking 6.2 seconds before hitting a respectable top speed of 153 mph (246 kph).

As for this particular car, it’s number #387 and has been driven for less than 11,000 miles (17,702 kilometers) in its 30 years of life. The car was subjected to a complete service earlier in the year when it received new fluids, belts, battery, and fuel tank. Cosworth specialist John Taylor was in charge of bringing the car back to life, which also involved installing new brake discs at both front and rear axles.

With the exception of the parts that have been changed while it was serviced, everything else about this Sierra Cosworth RS500 is original. It still has the Dunlop set of tires it came with back in late 1987 when the car was delivered to its first owner. The wheels are original as well, and so are all the windows and body panels. As for the interior, it appears to be in pristine condition without showing any signs of wear and tear.

Silverstone Auctions will have the sought-after Ford up for grabs at its Classic Sale 2017 during July 29-30 and estimates it will fetch between £90,000 and £100,000 ($117,000 and $130,000), plus a buyer’s premium of 15 percent). The winner will also get all the original parts that have been swapped out, the full service history, along with the handbooks that came bundled with the purchase. Not only that, but there’s even a parking ticket from June 2, 1990 issued by the police in Surrey, U.K.