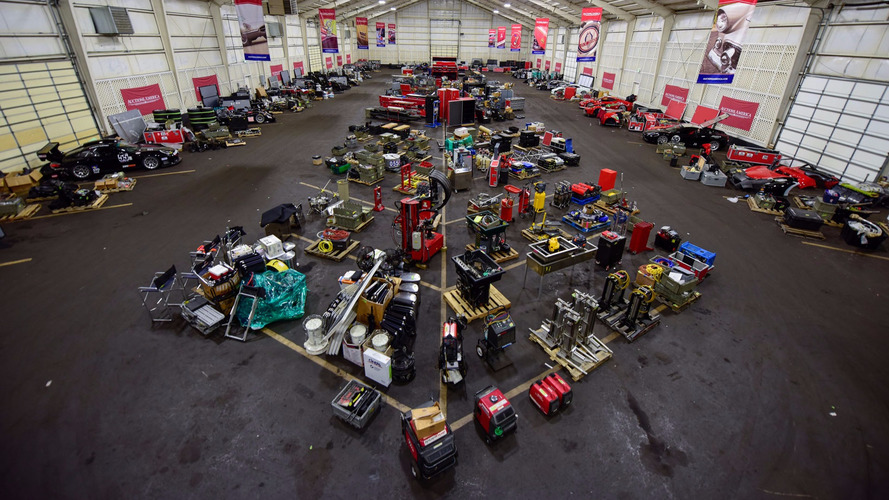 Everything from race-spec Ferrari 458s to helmet dryers will go to the highest bidder.

If you’re in the market for a turn-key race team complete with cars, you’ll want to attend Auctions America’s Auburn Spring sale next month in Auburn, Indiana. The company is selling off the seized assets of Level 5 Motorsports in a massive, no-reserve collection featuring 350 lots, and being no-reserve, every single lot will have a new owner.

We’re not just talking about cars and a few parts bins, either. Level 5 Motorsports was notorious for living large in the racing world, backed by payday loan shark Scott Tucker who, along with others in his payday business, were called out by a Nevada judge last October for deceptive practices. By deceptive, we mean charging people apocalyptic interest rates on short-term loans then obscuring the operation through Native American tribes, which are subject to different federal requirements.

As a result, Tucker and company were ordered to pay the Federal Trade Commission $1.2 billion, and that’s just the beginning. A criminal trial for Tucker is set to begin later this year, and if he's found guilty, he could spend the next 20 years behind bars.

To make this long story short and give it a proper motoring marketplace spin, Tucker’s loss is your gain!

And there’s plenty to gain. Level 5 Motorsports competed in numerous racing venues including the Grand-Am and American Le Mans Series, and the 24 Hours of Le Mans to name a few. The team also redefined extravagant, so aside from 11 race cars including five Ferraris, five IMSA racers, and a 996 Porsche, there are enough add-ons to support several race teams. Sure, there are the expected tools and spare parts, but bidders can also score laptops, tire warmers, portable generators, scooters, massage (yes, massage) tables, two race trailers, pedestrian barriers to keep your race fans at bay, and enough Ferrari parts (including full engines) to build a new car.

Everything is offered at no reserve, so get your credit cards ready. We already have our eyes on the “assorted turbos” lot, because everyone needs assorted turbos in their garage. Get an overview in our gallery below, or hit the Auctions America link for details on every lot.

All photos 2017 © courtesy of Auctions America