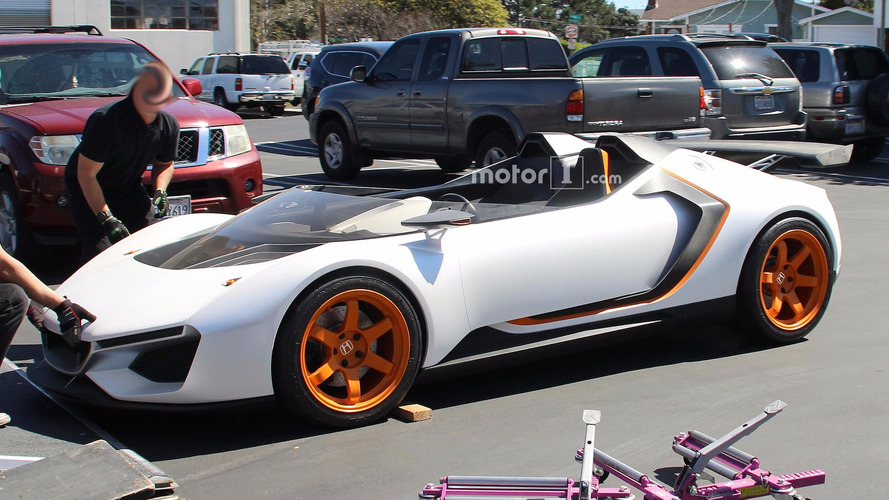 There are a few possibilities about what this peculiar vehicle could be, but they would all be good news for sports car enthusiasts.

Our spies have snapped some photos of a mysterious Honda sports car, and the vehicle’s lines look too extreme to be a production model. However, it seems at least conceivable that this could be a concept for the sub-NSX model ZSX or the often-rumored S2000 revival.

An ultra-low front end with no visible headlights and stubby windshield indicate this this model isn’t for production, but both elements look fantastic. Intakes in the rear fenders would feet air to the engine is back there. Nacelles above the seats would provide rollover protection, too. At the back high-mounted exhausts allow room for a big diffuser. Look closely, and you can see “Sport” in a stylized font on the metal between the tailpipes.

This vehicle’s shape is remarkably similar to a Honda-trademarked design (above). Until now we’ve only seen that roadster in simple, computer-generated drawings posted by the European Union Intellectual Property Office. According to the filing accompanying those images, Honda protected the design on May 5, 2015.

Evidence seems to indicate that this isn’t the ZSX because this vehicle is in California, but the company doesn’t have the rights to the model name in the U.S. Honda trademarked the title in Europe in July 2016, but it abandoned rights to the label in the United States in 2012, according to the U.S. Patent and Trademark Office.

In our opinion, the Sports label at the rear puts the higher probability that this vehicle is somehow related to Honda models like the S2000 and S660 in Japan. The styling appears to take elements from the S660 but with exaggerated proportions that make the parts look even more aggressive.

Unfortunately, we can’t be sure when this vehicle might ever go on public display or when more information about it might come out.

These spy shots arrive shortly after a patent filing shows that Honda protecting the intriguing backbone chassis design of its Project 2&4 Concept. There’s no evidence of any relationship between the vehicle in these photos and the one in the patent. However, they’re indications that folks within Honda are actively mulling how to create a minimalist sports car. If we’re lucky, the road-going result of this brainstorming might even arrive in dealers.