The Honda Civic Si: A Retrospective On Honda’s Sport Compact 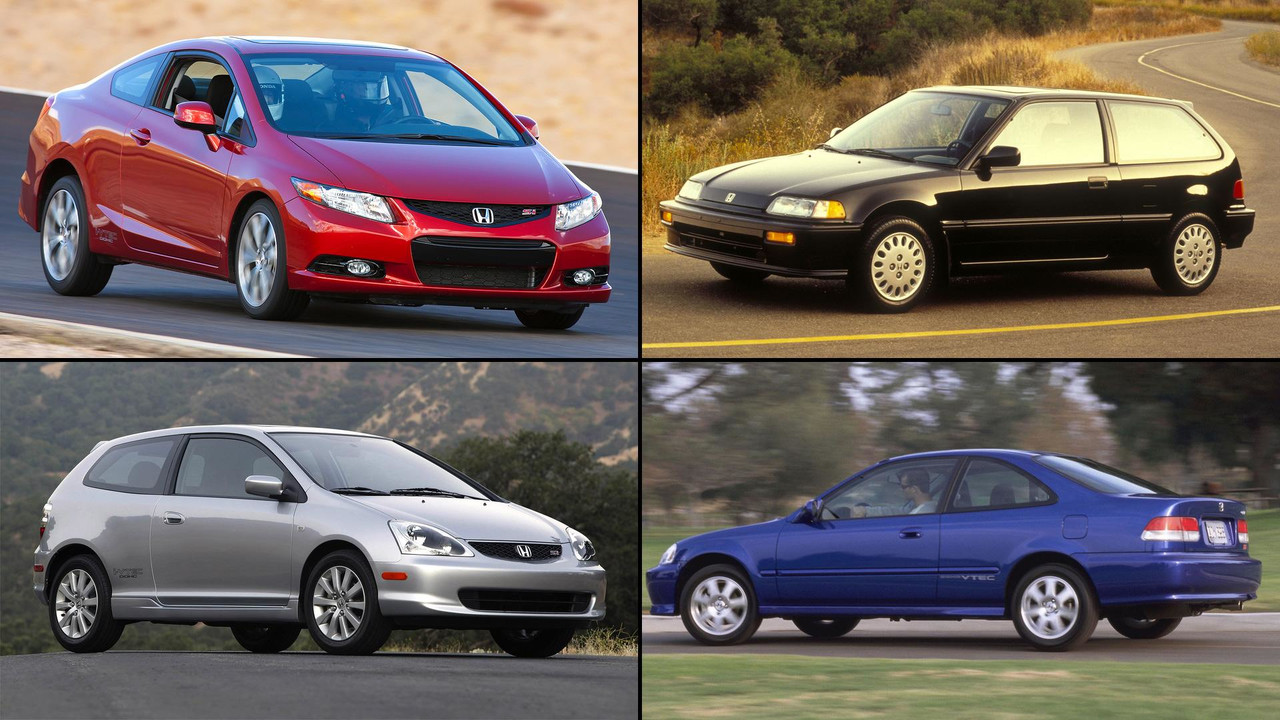 The brand-new 2017 Honda Civic Si is fun to drive and a great value in the sport-compact space – go read our First Drive if you haven’t already. But the Si nameplate was a household name among car enthusiasts long before this model. Here’s a quick look back at Civic Si variants of years past.

After bringing the CRX Si to America for the 1985 model year, Honda stuck the same powertrain into the Civic hatchback for 1986. A fuel-injected 1.5-liter, 12-valve inline-four, it made 91 horsepower and 93 pound-feet of torque. A five-speed manual transmission sent power to, as in every Civic Si ever made, the front wheels. (Japanese-spec model shown.)

With the fourth-generation Civic, the Si’s engine grew to 1.6 liters and had 16 valves, with 108 hp and 100 lb-ft; it revved to 6,500 rpm, an extra 1,000 revs compared to the prior Si. Other changes included unique body parts, unique anti-roll bars, and bucket seats to distinguish it from other Civics.

The sleeker, more rounded fifth-generation Honda Civic birthed a more powerful Si. It used Honda’s VTEC technology in a single-overhead-camshaft layout for the first time; the 1.6-liter engine thus produced a heady (for the time) 125 hp and 106 lb-ft. Its torque band was also far wider and more usable than before. The car redlined at 7,200 rpm, had a 9,000-rpm tachometer, and had rear disc brakes instead of the drums on other Civic models.

After a brief hiatus, the Civic Si returned, this time offered only as a coupe. Its engine made a big leap in terms of power, with the dual-overhead-cam VTEC 1.6-liter offering 160 hp at a dizzying 8,000 rpm. Upgraded springs and shocks, new anti-roll bars, and 15-inch wheels with low-profile tires added more cornering capability to much the straight-line prowess. But perhaps my favorite element of all was the ultra-cool Si-exclusive Electron Blue paint seen here.

Like today’s Civic Hatchback, this one was built in England. Offered only as a hatchback – with some quirky design elements like a dash-mounted shifter for the five-speed manual – the 2002-2004 Si focused on improving everyday drivability. Its 1.6-liter engine switched over to its high-lift VTEC cam profile earlier than the predecessor, at 2,300 instead of 4,800 rpm. The engine produced its maximum 160 hp at “just” 6,500 rpm, 1,500 earlier than the previous Si, while peak torque of 132 lb-ft at 5,000 rpm. The car also wore 16-inch wheels with five-lug wheels for the first time.

Hello, displacement. A new 2.0-liter engine provided far more power and torque than before, pushing the Si’s outputs up to 197 hp and 139 lb-ft. A six-speed manual transmission finally replaced the prior cars’ five-speed box. An Si sedan became available for the first time for the 2007 model year. Both body styles also got unique interior and exterior styling cues, upgraded suspension and brakes, and a limited-slip differential.

Another first for the Si line: a turbo. The first factory turbocharged Honda Civic Si is in dealerships now, dishing out 205 hp and 192 lb-ft of torque from its 1.5-liter engine. While it’s easy to criticize the fact that the power rating is unchanged, there’s more torque and it’s delivered over a wider rev range. As ever, look for the requisite upgrades like a limited-slip diff, better brakes and suspension, various body upgrades (so many wings and vents), and new interior pieces like sportier seats. The result, according to managing editor Steven Ewing? “Well-rounded and nicely balanced, the Si carves out a unique and desirable position for itself in the sport compact class.”