10 More Things To Know About The Jeep Grand Cherokee Trackhawk 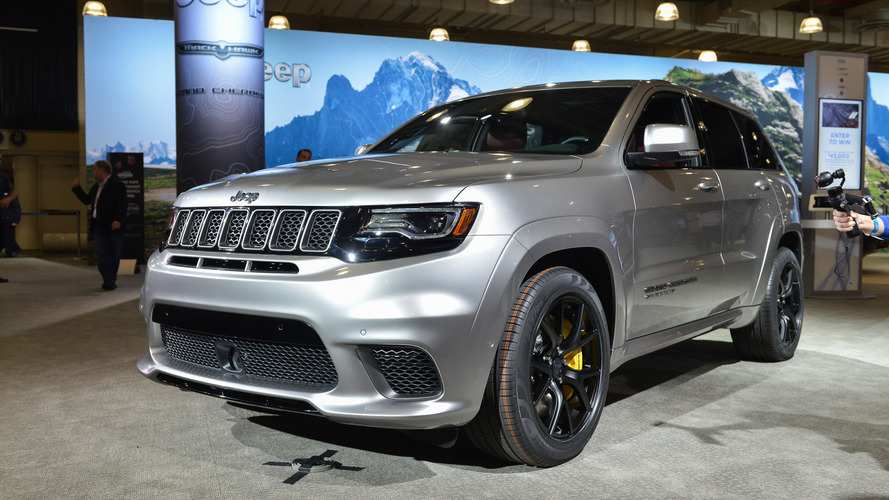 Don’t plan on using launch control until you’ve got some break-in miles on the clock.

At this point you probably know the basics of the Jeep Cherokee Trackhawk: Hellcat engine crammed inside a Grand Cherokee engine bay like stuffing in a turkey. But surely it’s not as simple as just dropping in a beefier engine, right? I sat down with Darryl Smith, director of SRT Engineering, and Paul Mackiewicz, Trackhawk vehicle integration manager, to learn more about what makes the supercharged SUV tick.

1. You can’t use launch control until you’ve broken in the engine.

There’s a big, extremely tempting “LAUNCH” button on the center console, but it won’t work until the odometer has passed 500 miles. That seems like a pretty sensible move, given that any new car needs to be driven gently for a few hundred miles. Then again, it’s not as if that Hellcat engine is brand new when the car leaves the lot: Each of the engines is put through a rigorous 42-minute dyno test before installation in the vehicle.

Mackiewicz recommends about 2,200 rpm for optimum launches on most surfaces. The launch control menu on the touchscreen lets you choose a launch engine speed from 1,500 to 3,500 rpm. Then just mat the brake and the throttle, release the brake, and hold on. As in the Demon (and Dodge Challenger/Charger Hellcats), launch control activates Torque Reserve, prefilling the supercharger and inlet tract with pressurized air so you get maximum power as soon as you leave the line.

Neither the Grand Cherokee SRT (which has ‘just’ 475 horsepower) nor the 707-hp Trackhawk have electronic limiters. But both run up against the laws of aerodynamics, putting the former’s top speed at 160 miles per hour and the Trackhawk’s at an incredible 180 mph. For reference, the more aerodynamic Charger Hellcat can hit 204 mph and the Challenger Hellcat will run up to 199 mph.

4. Blame the exhaust for the loss of 5 pound-feet of torque.

The Trackhawk’s engine cranks out the same 707 horsepower as the Dodge Charger/Challenger Hellcat twins, but 645 lb-ft compared to 650 lb-ft in the Dodge models. That’s due to the extra restriction in the exhaust routing required by the Grand Cherokee platform. Considering this 5,363-pound SUV will still run to 60 mph in 3.5 seconds, we won’t get too upset about those 5 pound-feet.

5. The front brake rotors are the largest ever installed on a Jeep model.

Not the largest on any Fiat Chrysler Automobiles product (heavy-duty trucks need big brakes), but the biggest on a Jeep. They’re 15.75-inch rotors up front, versus 15.0-inch ones in the Grand Cherokee SRT. The upsizing was necessary to accommodate the “thermal load” of stopping from the Trackhawk’s 180-mph terminal velocity, says Mackiewicz. In other words, they're going to get hot.

Mounted in the front driver’s-side fascia, it’s an oil-to-air cooler that helps keep the V8’s temperatures in check. “The 6.2 just has more oil temperature,” says Smith. The vented hood helps with cooling, too; the slot in the front fascia was already integrated into the 2017 Grand Cherokee, in part to future-proof it for the Trackhawk application.

It’s used to reduce unpleasant sounds and thus has a different profile in every driving mode; in Tow, for instance, it helps reduce droning or lugging sounds, while Track and Sport sound the raciest.

8. The entire driveline has been toughened compared to the Grand Cherokee SRT.

For starters, the Trackhawk uses ZF’s 8HP95 automatic transmission, which is an all-wheel-drive version of the 8HP90 used by the Dodge Hellcats. Its halfshafts are bigger and tougher, and the Magna all-wheel-drive system has also been upgraded.

9. Track mode is where the fun happens.

Specifically, it’s the only driving mode in which you can fully disable the stability control. Track also dials up the most aggressive settings for the Bilstein adaptive dampers, engine and transmission, and power steering, and sets the AWD system to a 30-70 front-rear power split.

10. No aerodynamic upgrades were needed.

Despite its terminal velocity being 20 mph higher, the Trackhawk didn’t need modifications to its bumpers, spoilers, or other aerodynamic aids compared to the Grand Cherokee SRT. That’s because, Smith and Mackiewicz say, the SUV’s front-rear aerodynamic balance between lift and downforce was already appropriate for keeping it secure at high speeds.