The McLaren lineup receives a baby sister, the 570S. We drive her across Europe and report back on the strong family resemblance.

If you believe McLaren, the manufacturer of some of the hottest bespoke performance cars of the moment, a typical buyer gets as much thrill out of the transaction as, say, most people buying sweaters. Said owner already has, oh, I don’t know, a few, pricey toys occupying space in the garage, and it doesn’t induce wallet-squeezing anxiety to add a one-of-a-kind British sports car like a 650S or 675LT to the mix.

For the rest of us, who spend time thinking about and saving up for aspirational purchases, there’s now something of a solution. Meet the 2016 570S, the so-called, entry-level McLaren, which will attempt to dispel the myth that McLarens are only for members of the Three Comma Club. How did McLaren get to this point? The brand’s success in delivering low-volume runs of super-high-performance sports cars has made McLaren, barely a decade-old, a household name. Few brands, except for Tesla, have achieved a feat like this. As McLaren expanded and simultaneously became more popular in new markets, the addition of a coupe like the 570S made sense. (A convertible is coming soon, as well.) After all, the market for biturbo sports cars is on the upswing, and the lower-output 570S and 540C sibling make for entry points to some markets where engine size and output have significance.

We could think of no better way to test Everyman’s McLaren than to subject it to a proper road test: in this case, a 500-mile convoy of 570S coupes across motorways and mountain passes from McLaren’s UK headquarters in Woking to Geneva, Switzerland. A pair of 650S convertibles joined as pace cars. If there’s no feeling quite like seeing a McLaren “in the wild,” whether out on the highway or street-parked in the city, seeing a gaggle of them increases heart palpitations by an order of magnitude. 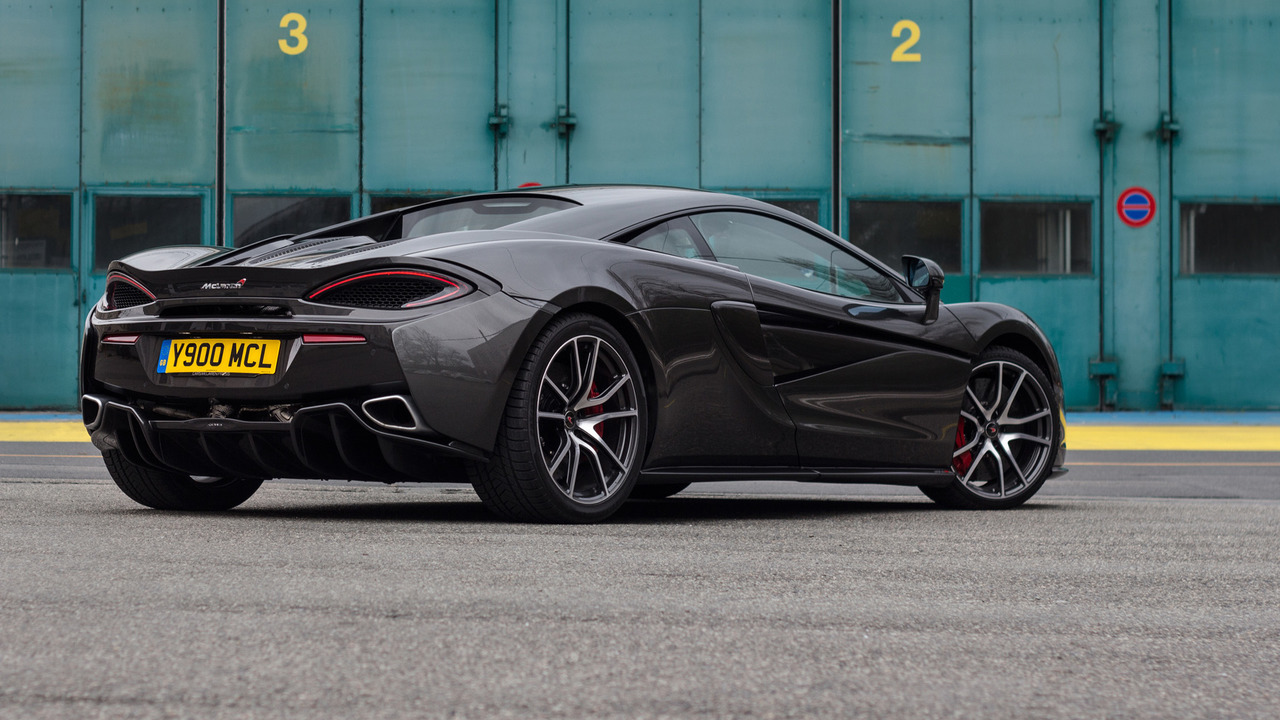 There’s absolutely no reason to dismiss the 570S as a pretender. The 570S is the type of sports car that makes you want to fall in love with it, in a manner that Italian manufacturers do so well and most Germans can only envy. It happens in an instant. Run your hands along the contours of its sides to find the most delicate and muscular body shaping this side of a Jaguar F-Type and Aston Martin DB9. Where the 650S seemed slightly garish and out of proportion, there is beauty in the 570S’ curves. All of the visual badassery of the 650S and 675LT has been distilled into the 570S. Most people will be able to identify the 570S as a McLaren from far away; only Woking’s illuminati will be able to discern the 570S’ slightly more blunt front end, larger visual features front and rear, and shorter rear deck. In fact, had there never been a 650S – or a 12C, or an MP4-12C, for that matter – the sharpness of the 570S’ lines could easily define a brand.

Once you’re hooked by the 570S’ looks, its biturbo, 3.8-liter, 562-horsepower V8 and stellar chassis only serve to reinforce the message that it’s a serious performance car. Zero-to-high-speed happens instantaneously. Driving a McLaren is a different experience than most cars, even in this segment, as you can feel the weight of the throttle through the accelerator and adjust it accordingly. Stepping down hard on the accelerator is like applying surgical pressure. It feels amazing, and sinful in a way. The stiffness of the brake pedal means that a significant push on it is required in bumper-to-bumper traffic situations. You don’t want to know what happens if your 570S accidentally rear-ends a Yaris.

McLaren quotes a time of about four seconds or so to 60 miles per hour. We believe it. The seven-speed dual-clutch automatic is so smooth and sweet to use that you’ll begin to swear by it. Like all McLarens, the shift paddles behind the steering wheel do all the work. McLaren promises that the ribaldry continues to 204 mph, although we were unable to verify that assertion. 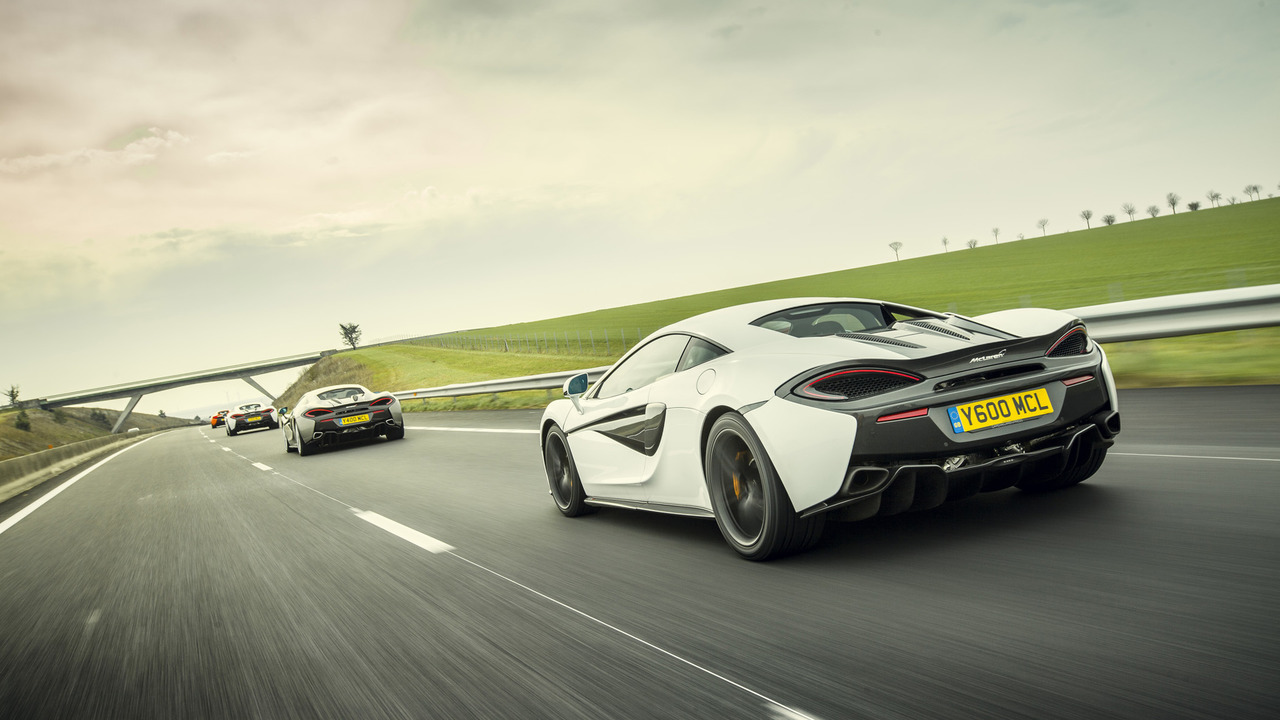 Lest you assumed that the 570S was a one-trick pony, it’s as confident, agile, and useable on public roads as it is on the track. On a highway trip of about 500 miles, the 570S was no harder to keep relaxed than a Mini Cooper – something you could hardly say of a 650S, and never say of a 675LT. Ultra-wide tires give the 570S a planted stance, and its electrohydraulic steering rack provides a refreshingly analog feel to changing direction. Even on high-performance snow tires, as the test car was equipped, the 570S kept pace in alpine mountain passes; of course, there was more noticeable road noise than usual, but there was no problem keeping a conversation going using indoor voices, and there was no downside to ride quality. (Grip will be higher on high-performance rubber, but a wintry drive in unpredictable climes made these tires a must for this drive.) There are some definite downsides to the wide, low body in day-to-day driving. A missed turn that led to a tollbooth crossing resulted in history’s most awkward three-point turn. The 570S may be able to skirt around a corner with directness and accuracy, but it cannot rotate on its own axis.

You spend more time dreaming about the 570S’ performance than you do luxuriating in its spartan interior. Just because McLaren epitomizes the supercar brand for the up-to-date, tech-focused enthusiast, that doesn’t mean the 570S’ navigation system is very good. In fact, the entire infotainment system is something of a headache to use. Controls for audio, navigation, and some vehicle settings are buried within a menu controlled by indecipherable buttons and switches and knobs. (Upgrade to the Meridian audio system, too, if you desire clarity in sound quality.) One upside: Whatever does appear on the screen is in high resolution in McLaren’s slick typeface. On the plus side, seats are long-journey comfortable, and adjustable, and the wide-bodied stance gives 570S occupants a feeling of space inside. Material quality is at the top of its class, which stretches from the hand-sewn treatment of a Porsche 911 Turbo S to the less-special feeling of the Jaguar F-Type R and SVR. 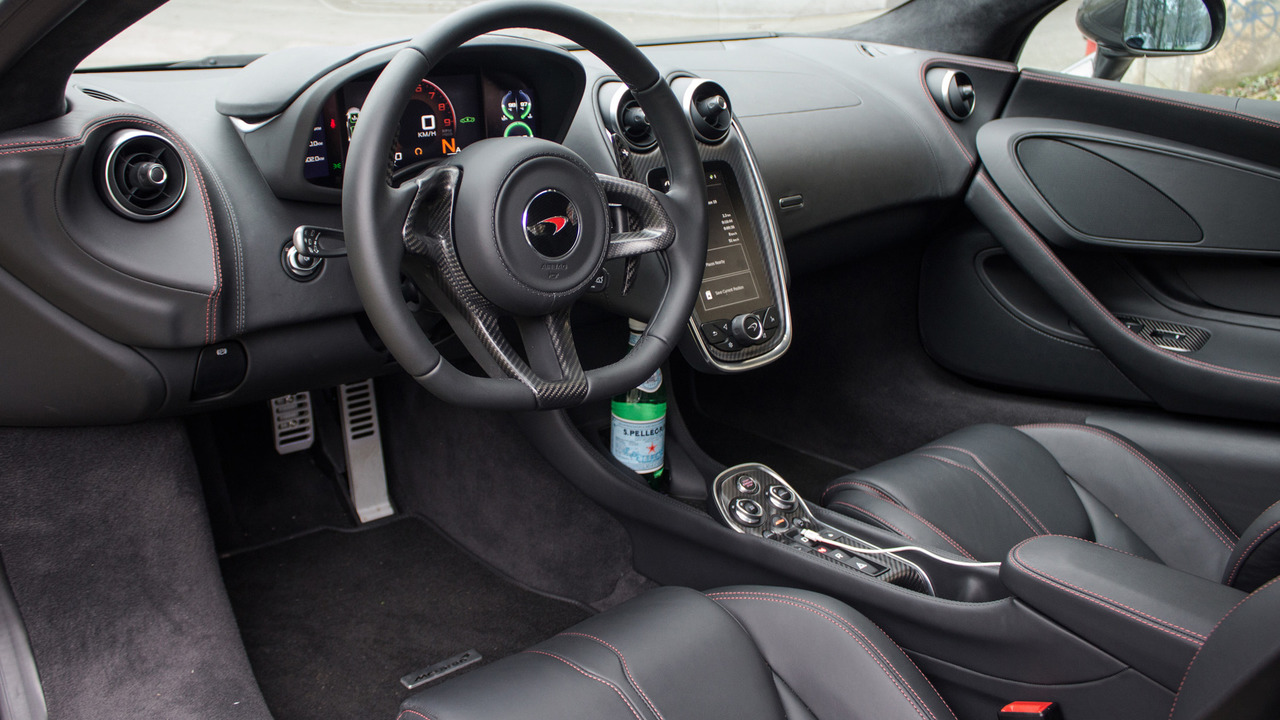 On the other side of the usability ledger: Cargo space is virtually nonexistent. Yes, at first, you might marvel at how many road trip snacks you can fit in the 4.4-cubic-foot frunk – the rear compartment is reserved for the engine – but a pair of roller board suitcases would have a difficult time fitting up front. The solution? Pack light, or wait for the upcoming 570GT, which will feature a hatchback to better solve that problem. The weight in the nose of the 570S will thank you, too. Thanks to the scissor-style doors and menacing good looks, you’ll keep a low profile by remaining very high-profile.

With few options, the 570S can be a steal, at a few hairs under $200,000. Optioned properly, however, the 570S can become something of a gem. A close read of the options list is a must. Of course you knew there were different seat materials and colors available, but did you know that there were options for shift paddles, too? Don’t worry if the bottom line begins to creep up to the territory where 650S pricing commences. Choosing a McLaren is the wisest move an enthusiast can make, to buck the trend of flashy but cold-hearted hypercars coming from every manufacturer that can build one fast enough.

The very best moment of driving a 570S is when the roads are warm and dry, curves are up ahead, and there is no traffic in sight. Drop a couple of gears, listen to the revs sing up to the limiter, and punch the throttle. In an instant, the 570S turns from a wide and dominating presence to the nimblest grand tourer this side of the Alps. You’ll have a harder time finding enough spurts like that than you will affording the 570S. Maybe it’s time for a second piggy bank?