One could argue that Lexus invented the luxury crossover segment with the original RX 300, a spacious, two-row SUV that had all the quality and comfort one would expect of the brand. But ever since that original 1998 model, the nameplate has become the archetype of a mobile appliance, something that’s dependable and user-friendly but never exciting.

That changes with the 2023 Lexus RX, a vehicle that matches its emboldened styling with some newfound athleticism – especially the brand-spankin-new RX 500h F Sport Performance. That model’s turbocharged 2.4-liter inline-four drives the front wheels, with a torque-splitting electric motor on the rear axle giving it a combined 366 horsepower and 406 pound-feet of torque. The non-hybrid Lexus has the same gas engine, just sans hybrid boost, and it makes more torque than its V6-powered predecessor. And then there’s the frugal RX 350h, whose electrified 2.5-liter four is the efficiency play.

As important as the changes under the hood are, the new RX’s GA-K platform is probably the biggest contributor to its newfound refinement and borderline playful back-road behavior. Lighter, stiffer, and quieter than before, the 2023 Lexus RX somehow keeps the virtues of quality and comfort while adding a hint of driving verve.

Don’t let the familiar styling fool you, GA-K means this is indeed an all-new RX. Shared with other Lexus models like the mid-size ES sedan and compact NX crossover, the architecture helps shed about 200 pounds of weight compared to the 2022 RX, while also imbuing the popular CUV with a stiffer, stabler backbone. The end result of that change is a vehicle that is smoother than its predecessor, while also boasting better steering response and improved stability when cornering or traversing potholes.

Dig beyond that cantilevered D-pillar and floating roof, and it becomes clear that the crossover has indeed been fully redesigned. Overall length is identical to that of the 2022 RX, but the rear axle has moved backward 2.4 inches for a longer wheelbase and shorter rear overhang. The rear track is 2.7 inches wider, the front up 0.7 inches, and overall width has gone up an inch. The roofline is 0.4 inches closer to the ground, the hood is lower, and the dash-to-axle ratio is longer. It all adds up to an RX that looks and feels a bit more premium, with a wide stance and less dowdy proportions.

Inside, the RX is far more contemporary, finally jettisoning its awful trackpad interface in favor of the infotainment system that debuted on the NX last year. The standard touchscreen is a 9.8-inch affair and it does very well, but a wider 14.0-inch display is included on all but the base trim level. Both have wireless smartphone connectivity, excellent touch response, and a menu structure that’s relatively easy to parse. I’d like a few more hard controls – like a home button that exits CarPlay with a single press – but the new system is a huge, beautifully rendered improvement over the old RX.

The rest of the cabin is quite nice as well. The base trim level has Lexus’ excellent NuLuxe faux leather upholstery, while other trims get genuine hides on the seats. In either case, Lexus uses good materials for its bread-and-butter crossover, with only a small smattering of hard plastics on the lower door panels. There’s a long list of standard equipment, too – heated and power front seats, a moonroof, LED head- and foglights, low-speed traffic jam assistance, and paddle shifters all come standard, with the higher trims receiving seat ventilation, a panoramic roof, Mark Levinson audio, and more.

My first experience with the new Lexus crossover came in the form of the hybrid RX 350h model. Every hybrid comes standard with all-wheel drive thanks to an electric motor mounted to the rear axle. Combined output for the whole setup is 246 hp, not much for a 4,400-pound vehicle (and less than the old V6 hybrid’s 308 horses) but at least there’s some low-speed grunt due to the electric motors.

In spite of its limited sporting pretensions, the RX 350h is still a competent machine thanks to that stiff new GA-K architecture underneath its skin. The greater torsional rigidity helps the suspension and steering do their work more effectively, and turn-in is far snappier than before. The hybrid model does suffer from a little body roll, but it’s still almost fun to hustle up a twisty road – not something you can say of many front-drive–based crossovers.

The architecture also yields comfort dividends. The new RX is noticeably quieter than the old one, with much less tire roar over gritty pavement and fewer structural quivers when traversing rough surfaces. The 2.5-liter four-cylinder can be a bit thrashy when operating at full throttle, but it’s a quiet cruiser, and the hybrid system is capable of fully electric driving at suburban speeds if the smallish nickel-metal hydride battery has enough juice.

The non-hybrid RX 350 and its 275-hp, 317–lb-ft turbo four bring more driving verve, particularly when ordered in the F Sport Handling trim level and its now-mandatory all-wheel drive. The front grille features a bolder mesh design, and the bumpers are more aggressively sculpted. Standard 21-inch wheels wear a gloss black finish, the typical trappings of a modern sport-styling package. Inside, the front seats boast wider bolsters to keep you in place while cornering, and there are F Sport–exclusive finishes like pinstriped aluminum trim instead of wood.

There are also some actual mechanical upgrades to the F Sport Handling that supports its new name. For starters, Lexus adds adaptive dampers to the MacPherson strut and multilink rear suspension, which broadens the crossover’s ride-and-handling profile to reduce body roll in corners without sacrificing highway comfort. Most impressively, there are six-piston front brake calipers and 15.7-inch rotors, compared to the lesser RX’s single-piston/13.4-inch combo. While the basic braking package is fine, the upsized stoppers inspire palpably more confidence when approaching a corner with too much gusto. 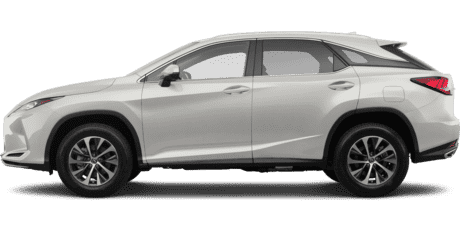 The RX 350 is pretty entertaining to drive, with good body control over bumps and accurate – though vague – steering. Few crossovers handle like sports cars, but the stiffer suspension setup, grunty engine behavior, and responsive eight-speed automatic give the two-row Lexus the ability to put a smile on your face better than ever before. Best of all, the F Sport Handling doesn’t exact much of a comfort penalty. There might be a bit more tire noise, but otherwise, the multi-mode suspension and robust platform work together to give you some peace and quiet when desired.

Turning Up The Wick

Although not a foil for something wearing an SVR or AMG badge, the RX 500h F Sport Performance is the sportiest Lexus SUV ever. The new trim includes the F Sport Handling’s suspension, brake, and interior updates, but adds a bit more exterior flash in the way of gloss black window surrounds, mirror caps, and roof rails, as well as a matte black finish for the 21-inch wheels. Most importantly, it bolsters the 350 model’s turbocharged engine with a new front drive unit (electric motor, inverter, and six-speed automatic transmission) and a robust “e-Axle” rear electric motor that’s capable of splitting torque side to side.

The sum total of all that gas-electric technology is 366 hp and 406 lb-ft, numbers that beat out the three-row Acura MDX Type S by 11 and 52, respectively. Power like that gives the RX a 5.9-second sprint to 60 miles per hour, trailing the MDX by a couple tenths but still a lot quicker than I’d ever have expected a Lexus crossover to be. Best of all, the electric motors fill in the gas engine’s minor turbo lag with a smooth rush of instant torque, making the RX 500h feel decidedly more confident in the cut-and-thrust of everyday traffic (as well as when hustling up a fun road).

And the RX 500h has the same dual-personality suspension, arresting brake package, and balanced performance as its lesser F Sport Handling siblings. And while it’s not nearly as capable or aggressive as a BMW X5 M50i or Mercedes-AMG GLE 53, it’s not likely to cost as much as either – and more importantly, it gives the bread-and-butter Lexus RX some genuine edge and surprising quickness.

The traditional RX customer is probably most interested in more rational traits like fuel economy, passenger space, and safety, and the new model delivers – although strictly speaking, we still don’t know how much it’ll cost. Lexus Safety System+ 3.0 is standard on the 2023 RX, including automatic emergency braking, adaptive cruise control, low-speed traffic jam assistance, curve speed reduction, lane keep and lane centering tech, and a junction collision monitor that intervenes if the car detects that you’re about to turn in front of traffic.

Somewhat confusingly, in spite of the 2023 model’s added width, longer wheelbase, and carryover overall length, the passenger cabin is a bit smaller than the outgoing RX, although cargo space jumps from 16.0 cubes to 29.6. The reclining rear seat makes the most of the room available, and all four outboard seating positions are well-shaped for long-haul comfort and support.

Fuel economy improves as well. The front-drive RX 350 gets a Lexus-estimated 22 miles per gallon city, 29 highway, and 25 combined – up two mpg over the V6-powered 2022 RX 350. Adding all-wheel-drive to the turbo four loses one tick across the board, though again, it’s 2 mpg more efficient than its predecessor. The hybrid improves even more, jumping from 30 combined for the outgoing RX 450h to 36 combined for the 2023 RX 350h. The sportiest RX 500h F Sport Performance model achieves 27 mpg combined, a nice compromise given the power on offer.

While the outgoing RX was perfectly fine, its trackpad-operated infotainment system, somewhat noisy cabin, and peaky V6 made it feel a bit dated and inelegant. Like it said on my freshman algebra report card, there was room for improvement.

But unlike 15-year-old Brett, Lexus took summer school and hit the books hard, returning in the fall with far more talent and intelligence than before. The new RX upholds its company’s typical values – comfort, quietness, and usability – even better than its predecessor, but now it offers some semblance of driving fun to go along with its left-brained attributes.

The three-strong engine lineup will soon expand to four with the availability of an RX 450h+ plug-in hybrid model likely using the NX PHEV's powertrain, but even before that, the Lexus crossover has something to offer most shoppers, be they looking for efficiency, balance, or a bit of driving fun. It may not be ready to go hunting Cayennes, but when was the last time a Lexus crossover was this entertaining? Probably never.

Does the 2023 Lexus RX have three rows of seats?

No, the 2023 Lexus RX loses its extended-wheelbase L model for 2023. The RX L will be replaced by a dedicated three-row crossover within the next couple years, possibly called the Lexus TX, which will do battle with the Infiniti QX60 and Acura MDX.

Lexus also says that a plug-in hybrid RX 450h+ model will be available in the future, but the company hasn’t committed to a timeline.