With 37 mpg combined, the hybrid Sorento is one of the most efficient crossovers in the mid-size class.

Electric vehicles are gradually kicking traditional old-school gas cars to the curb. Crossovers, too, with recent arrivals like the Ford Mustang Mach-E and Volkswagen ID.4 further bolstering the booming market. But don’t forget about hybrids. The gas-and-battery combo still has lots of merit, especially with strong options from automakers like Kia.

The Sorento Hybrid, then, makes a lot of sense for a large segment of shoppers. It’s everything we love about the traditional Sorento – a Motor1.com Star Award winner – now with batteries included. The Sorento Hybrid is stylish, comfortable, and comes with a standard third row, not to mention it has a very reasonable starting price of just $35,345.

The Kia Sorento is a stylish SUV in any form, and the Hybrid is no different. The bold front fascia combines triple-beam headlights with a tapered "Tiger Nose" grille, while a large black vent at the base of the bumper hides quad LED fog lights. And the faux skid plate doesn't actually protect the underbelly, but its bright silver finish looks neat. The only features clearly distinguishing the hybrid Sorento from the gas model are the upturned "vents" at each corner of the bumper.

The Runway Red paint – a $445 option – is a handsome choice to pair with that edgy exterior, but the small (by today's standards) 17-inch wheels don't give the Hybrid as good a stance as the gas Sorento on 20- or 21-inch shoes. Those tiny wheels serve a purpose: efficiency. And Kia wraps those rims in low-resistance rubber tires to further hammer home the point.

The interior of the Hybrid looks like any other Sorento, with the same simple but cohesive cabin layout carrying over. Fake black leather covers the seats, soft plastic coats the dash and door panels, and shiny aluminum accents dot the air conditioning surrounds and center console. On the passenger-side dash, that silvery trim gets a geometric design that makes it look more premium.

But unlike the gas Sorento, which has a normal shifter, the hybrid model opts for a rotary dial that feels less premium. Genesis uses a similar rotary design, but that dial has significant heft and weight. In hand, the Sorento’s shifter feels much cheaper by comparison. 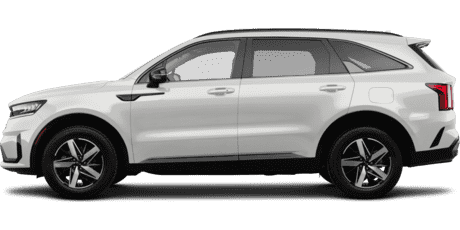 The Kia Sorento Hybrid is comfortable around town, composed on the highway, and quiet – really quiet. The well-mannered suspension absorbs even the most aggressive blows. Sound deadening is sublime, too, with barely any outside noise making its way into the cabin.

Leather chairs aren't an option on the Sorento Hybrid, but the leatherette front thrones feel nearly as nice as the real thing. They offer ample bolstering and back support with power adjustability on the driver's side and heating for both. And the second-row bench is also a nice place to be, with ample headroom and legroom.

The third row is a different story. Accessing the rear-most seating area isn't the issue; a single button at the base of the second row flings the bench forward, giving average-sized adults enough space to squeeze in. But once seated, the high-mounted floor makes for an awkward seating position, and the lack of a third-row A/C vent means it can get hot back there. And with that third row upright, cargo space is an issue. The Sorento has a middling 12.6 cubic feet behind the last row.

Of course, none of the Sorento’s key competitors even offer a third row, and if you really need space, there’s always the well-regarded Kia Telluride. For what it is, the mid-size Kia Sorento is more than up to the task of hauling a family (and maybe a few of the neighbor’s kids) around town.

The Sorento Hybrid is well-equipped from the jump. Even the base S model gets a 10.3-inch touchscreen interface, a partially digital instrument cluster with a 4.2-inch productivity screen, eight USB ports, and satellite radio. The EX adds a wireless phone charger, and that's about it. And still, even on the EX model, Kia does not offer wireless Apple CarPlay and Android Auto. Both connections are wired.

But Kia's Uvo infotainment interface and the 10.3-inch touchscreen is a joy to use, per usual. The graphics are crisp and clean, and every option lives neatly on the home screen. There are some fun features baked into the touchscreen, as well, like the nixie-tube radio display and Sounds Of Nature; you could be on the beach or in the forest with the click of an icon.

A healthy 227 horsepower and 258 pound-feet of torque come from the turbocharged 1.6-liter hybrid setup. That isn't exactly blistering for a three-row SUV, but then again, expecting impressive straight-line speed out of your Sorento Hybrid is just silly. This powertrain is perfectly plucky around town, with just enough torque for easy overtaking and attacking highway onramps. There is no dedicated EV mode, though – that feature is reserved for the plug-in.

Unlike the gas Sorento, – which is much nicer to drive – the hybrid feels more like an appliance. It rides softer than the standard model so it doesn't handle corners quite as well. In fact, cornering is quite poor. Body roll is significant, the tires are too squishy, and turn-inis vague. The steering is still as lightweight here as it is in the gas model, which makes for easy maneuverability in tight parking lots, at least, but it lacks any feedback otherwise.

As with technology, Kia offers an abundance of active safety features out of the box. The S model comes with automatic emergency braking with pedestrian detection, blind-spot monitoring, rear cross-traffic alert, and lane-keep assist with lane centering. The EX model makes do with all those same features plus navigation-based adaptive cruise control.

Kia has one of the best Level 2, hands-on safety suites on the market. A simple tick of the adaptive cruise control button with the lane-centering option active, and the Sorento Hybrid cruises confidently with minimal driver interference. The vehicle applies braking and throttle inputs smoothly and automatically, while the lane-centering technology delivers subtle steering inputs to keep the Sorento centered in the lane.

As far as crash-testing goes, the Sorento earns Top Safety Pick honors from the IIHS and a four-star safety rating from the NHTSA.

Among all mid-size SUVs with a third row, the Kia Sorento Hybrid is the most efficient of the group. Its fuel-sipping four-cylinder returns 39 miles per gallon city, 35 highway, and 37 combined. Only the two-row Hyundai Santa Fe Hybrid comes close with 34 combined.

And besides the Sorento and Santa Fe, there are no other traditional hybrids in this mid-size SUV space. The Jeep Grand Cherokee 4Xe is the only other partially battery-powered alternative, but since it plugs in, the Jeep doesn’t compete directly with this hybrid Sorento.

Of the normal gas-powered alternatives, nothing can touch the efficiency of the Sorento Hybrid:

The base Sorento Hybrid S starts at $35,345 with the $1,255 destination fee included, while the EX tested here starts at $37,345. The Sorento Hybrid isn’t the most affordable option in the class admittedly; nearly all of the non-hybrid options ask less to start, and even the Santa Fe Hybrid is cheaper. But Kia does offer basically everything standard.

If you want Snow White Pearl paint or the Runway Red pictured here, they will cost you $445 each. All-wheel drive is another $2,300 option, and the panoramic sunroof is another $1,300. But that’s it as far as options go. This tester skips those last two add-ons, which brings the final asking price to $37,820 with the red paint and carpeted floor mats ($210) added.

The Sorento Hybrid is hard to beat at this price – especially with this much standard equipment. The big touchscreen, standard third-row, and advanced active safety features won’t cost you anything extra. And if efficiency is your goal, you won’t find anything better in this class (without a plug).

Does The Kia Sorento Hybrid Need To Be Plugged In?

How Many Miles Per Gallon Does The Kia Sorento Hybrid Get?

The Sorento Hybrid achieves a fuel economy rating of 39 miles per gallon city, 35 highway, and 37 combined. It’s the most efficient SUV in its respective class.

Does The Kia Sorento Hybrid Come In All-Wheel Drive?

Yes, the Kia Sorento is available in both front-wheel-drive and all-wheel-drive configurations. Adding all-wheel drive on the base S model is an $1,800 option, and adding it on the EX trim is $2,300 with the inclusion of new 19-inch wheels.