Kia took the successful Telluride formula and applied it to the smaller Sorento. And to no surprise, it works.

The Telluride is a smash hit and Kia knows it. The three-row has earned countless accolades in its relatively short time on the market and is selling so well that the factory just had to boost production by 100,000 units. So it only makes sense that the company would build on that success by applying the same formula to 2021 Kia Sorento – which even execs admit draws heavily from its big sibling.

“We're basically trying to follow Telluride's success,” said Mark Savino, Kia product strategy manager, of the new Sorento. And that’s obvious just by looking at it; the Sorento's rugged exterior is clearly Telluride-inspired and even the cabin gets some of the same treatments. But that's not to say the 2021 Sorento is just a clone of the larger SUV – it has a distinctive personality, and a very good one at that.

More than any other mainstream company, Kia knows how to design a stylish crossover – first with the Telluride, then the Seltos, and now the new Sorento. Designers said they wanted the lineup to look tougher, and with the Sorento, it does. The brand's signature “tiger nose” grille adorns the front-end, joined by triple-beam LED headlights, a sleek daytime running light pattern, and sharply angled trim pieces lower on the bumper.

Boxy proportions akin to the Telluride further emphasize the Sorento's now-tougher persona, while the kinked black C-pillar creates a sort of floating roof effect – a familial trait borrowed from the K5 and smaller Seltos. Split taillights and a subtle spoiler help keep the angles tapered in the rear, and depending on which trim you choose, the Sorento comes with up to 20-inch wheels. Both of our SX Prestige testers, one with the optional X-Line package, wear the larger wheels, and they look great.

To our eye, the X-Line model is the more stylish of the two – especially in the trim-exclusive Aruba Green paint. The chunky bumpers with faux skid plates, darkened 20-inch wheels, and big roof rails give this Sorento a purposeful, rugged look. And that theme carries over to the cabin, which now gets a sharp wood trim and better leather, assuming you pay the extra $200 for the Rust Interior package – a reasonable price for something that looks this good.

But even without these optional pieces, the inside of the Kia Sorento is a nice place to be. The SX Prestige comes standard with genuine leather seating surfaces; our stunning Sapphire Blue Sorento wears a simple black leather and the Aruba Green X-Line model sports the rust-colored surfaces we like so much. The quilted front seats are supremely comfortable, as are the captain's chairs in the second row, and even the third row wears leather – and it doesn't feel too cramped comparatively.

The quilted front seats are supremely comfortable, as are the captain's chairs in the second row, and even the third row wears leather – and it doesn't feel too cramped comparatively.

Although the Sorento looks smallish on the outside for a three-row, there's a surprising amount of space inside. Despite being 10 inches shorter than the Mazda CX-9, it matches that CUV's third-row legroom (29.6 inches) and offers more passenger volume overall. Even the third row is comfortable for 6-foot-tall adults and relatively easy to access. A button atop the shoulder of the captain's chairs electronically moves the seats forward, leaving a solid opening for rear access. Kia did a great job of packaging this vehicle.

Powering the Sorentos we tested is the optional turbocharged 2.5-liter four-cylinder engine good for 281 horsepower and 311 pound-feet – that’s way more torque than what’s offered in the Telluride (262 lb-ft). Lesser versions get a non-turbocharged 2.5-liter capable of just 191 hp and 181 lb-ft. With the optional engine, the Sorento will genuinely get up and go. The turbocharged unit is punchy, with little to no lag off the line, gobs of low-end torque, and a solid stream of power at higher speeds.

Managing the power is a unique eight-speed dual-clutch transmission – different from the automatics and CVTs typical of most alternatives. And while front-wheel drive comes standard, all-wheel drive is available. We’d definitely recommend ticking that box, because the front-wheel-drive model doesn't apply power well. The tires gnarl at the pavement if you gas it hard and there's some pretty nasty understeer in corners, even when not hammering it. The throttle can be finicky, too, in Normal and Sport modes; power either arrives too suddenly or not at all.

The turbocharged unit is punchy, with little to no lag off the line, gobs of low-end torque, and a solid stream of power at higher speeds.

The all-wheel-drive system in the X-Drive model, though, alleviates some of those issues. Now with power at all four wheels, the Sorento manages that aggressive low-end twist more appropriately and with smoother inputs – there's no jerkiness off the line like you get in the front-drive model. Even the throttle feels easier to manage in Normal and Sport modes. The eight-speed dual-clutch transmission is quick and decisive, too.

The all-wheel-drive Sorento also has nice, lightweight steering feel and taut suspension that keeps body roll in check. This certainly isn't a sporty crossover by any stretch – and we doubt most buyers will expect as much – but the all-wheel-drive Sorento moves with purpose. The X-Line also adds more capability with a solid 8.2 inches off ground clearance. We didn't tackle any trails in the Sorento X-Line, but Kia says you can do so, in theory. 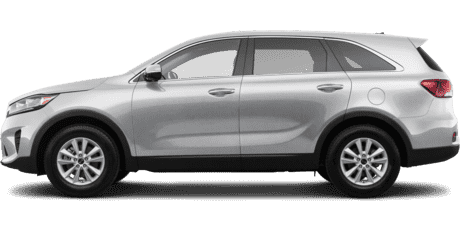 Gracing the inside of our two SX Prestige testers is the larger 10.3-inch touchscreen, compared to the base 8.0-inch screen. It has Kia's intuitive new infotainment system, which makes huge strides over its predecessor with a clean and modern layout, clear graphics in a fun neon finish, and a number of configurable options. Apple CarPlay and Android Auto do come standard, but as with the 2021 K5, only the smaller screen gets wireless CarPlay and Android Auto for some reason. The larger 10.3-inch screen is a wired connection only.

In terms of safety, the Sorento SX Prestige offers plenty of it out of the box. The standard suite includes things like automatic emergency braking, lane-keep assist with lane-centering, adaptive cruise control that can bring the vehicle to a complete halt, and a nifty Highway Driving Assist feature that works flawlessly. HDA makes tiny, persistent adjustments to the steering to keep the car perfectly centered, and it accelerates and decelerates more smoothly than many other cars we've tested.

Too Close For Consideration?

A comparable Telluride SX Prestige with most of the same features costs $46,390. Or if you want a more rugged look like the Sorento X-Line, with the new Nightfall package, the Telluride costs $47,685 before destination and handling fees. So just a few thousand dollars separate two.

Keeping Up With Kia:

But that’s not to say you should simply eat the price increase and get a Telluride. Even though the 2021 Sorento does draw on some of the Telluride’s best bits, this crossover has its own distinctive style and driving personality that we much prefer, not to mention better tech borrowed from the K5, more torque, and one of the more advanced active safety suites we’ve tested recently. The Sorento is a great crossover that does more than enough to separate itself, regardless of price.

See the 2021 Kia Sorento and all of the currently available 3-row SUVs and Crossovers.