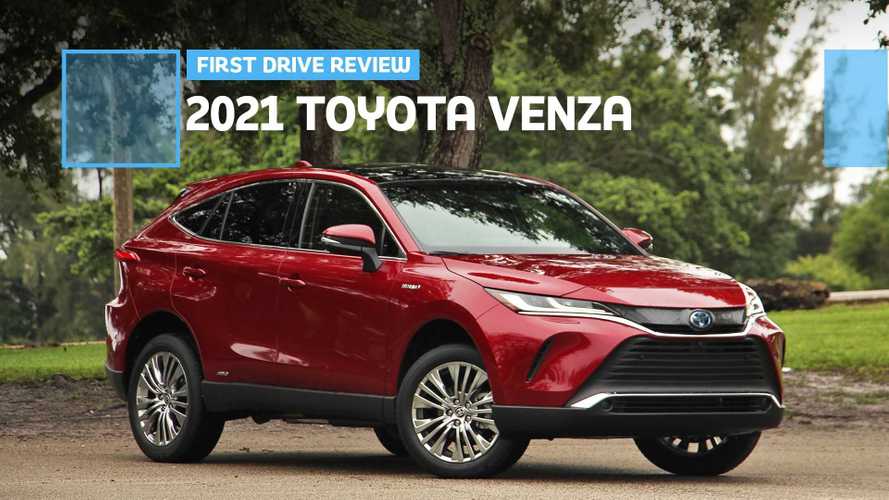 The Venza has RAV4 bones, but looks and feels like a luxury car.

The 2021 Toyota Venza looks like a luxury vehicle. It has sweeping lines and a dramatic profile, reminiscent of something more upscale, and an interior that's equally chic. But peel away the sheet metal and you might be surprised to learn that the new Venza is really just a RAV4 underneath, riding on the same versatile TNGA platform. But that's not a knock against the Venza – in fact, that's a good thing. The RAV4 is a great starting point.

The big difference between the two, though, is that the Venza is hybrid only. It gets the hybrid RAV’s electrified powertrain and many of its same interior components, and by and large, feels familiar from behind the wheel. But the obvious exterior redesign isn't the only thing that's new, there are other subtle engineering upgrades and design touches inside that make the Venza generally more appealing than the RAV.

Like we said, the Toyota Venza looks great – and it's a huge departure from its predecessor, last sold in 2015. Slim headlights with LED flourishes and a massive grille (in typical Toyota fashion) give the Venza a luxurious-looking front fascia, while the coupe-like sloped roofline and full-width rear light bar top off the tapered styling. Cover the Venza's blue-tinged Toyota badges and you might be able to trick people into thinking it's the latest Lexus.

Upscale finishes make their way to the Venza’s interior as well. Our Limited model wears super-soft faux black leather on the door panels and dash, while interesting trapezoidal accenting trim adorns the armrest and portions of the center console. The front seats sport the same high-quality pleather with standard heating and ventilation, while the driver gets eight-way and the passenger gets four-way power adjustability on the upscale Limited model.

Cover the Venza's blue-tinged Toyota badges and you might be able to trick people into thinking it's the latest Lexus.

And the Venza is very comfortable. The front buckets contour the driver well, and the second-row bench benefits from the same soft leatherette found throughout the cabin. The Venza's backseat also scores big brownie points for being as spacious as it is – we thought the sloped roofline might noticeably impede on headroom and legroom, but it really doesn't. Technically total passenger space in the Venza is down compared to the RAV (95.0 cubic feet versus 98.9 cubic feet), but it’s imperceptible.

Look up from the back seat and the Venza has an interesting, aptly named feature, dubbed Star Gaze with Frost Control. The $1,400 option on the Limited model is essentially an electrochromic panoramic glass roof that's frosted upon entry to prevent light from penetrating the cabin, instantly transforming into a normal see-through fixed glass roof at the click of a button. This is something we expect to find on a luxury vehicle, not a $40,000 Toyota.

The Venza LE and XLE models come standard with an 8.0-inch touchscreen, but our Limited tester gets a massive 12.3-inch display – bigger than what you get on any RAV – running Toyota’s Entune infotainment system with navigation, as well Apple CarPlay, Android Auto, and Amazon Alexa compatibility. This setup also comes standard with a nine-speaker JBL audio system. You will have to pay $2,050 extra, though, if you want the same massive screen and all the features on the mid-grade XLE.

The screen itself is very big and nice to use – it responds quickly to touch inputs and offers smooth scrolling functionality. But Entune is one of our least favorite infotainment systems out there. As we noted in our Highlander review, the home screen displays too much at once, there are odd rounded edges and contrasting colors, and when using the split-screen functionality for CarPlay or Android Auto, Entune is too invasive.

The screen itself is very big and nice to use, but Entune is one of our least favorite infotainment systems out there.

Toyota further compounds those issues by ditching all tactile buttons and dials on the Venza’s center console for touch-capacitive controls instead – which are impossible to use while driving. Most of those buttons have been moved to the steering wheel, which makes for a cluttered mess. Or you can downgrade to the 8.0-inch screen, which does have volume and tuning knobs.

The new Toyota Venza gets a 2.5-liter four-cylinder engine supported by a lithium-ion battery pack and three electric motors: two in the front and one in the rear. Total output is a modest 219 horsepower – same as you get in the RAV4 Hybrid – and power travels to all four wheels. That said, the Venza’s all-wheel-drive system sends most of its power to the front and really only gives power to the rear in low-grip situations.

The Venza definitely isn’t super quick, but it does accelerate well for a car that weighs 3,900 pounds. The secret is the instant torque from the electric motors, which work together with the gas engine to give the hybrid crossover lots of low-end twist. With the sharpened throttle response in Sport mode especially (one of three, joining Normal and Eco), the Venza feels rather enthusiastic off the line.

The Venza isn’t a performance crossover though, and most buyers will be more impressed with its well-defined smoothness around town. And even though it shares a base with the RAV4 – and does feel similar to an extent – the Venza drives more like a Lexus. The suspension is softer and more supportive than what you get on the RAV, the steering is lighter as well (with only a touch of dead-on-center feel), and thanks to the addition of an Active Cornering Assist feature, body roll is noticeable but less offensive.

At low speeds, the Venza can also kick into EV Mode, which cuts the gas engine off completely. But Toyota hasn’t disclosed things like range and speed limitations in EV Mode yet, which leads us to believe that those figures are less than stellar. At any rate, when accompanied by impressive sound deadening, it makes for an extremely quiet ride. The only thing we don’t like is the transition between electric and gas, which can be a little rough, and the gas engine itself can be loud as well.

The Toyota Venza isn’t just a great hybrid, it’s a great all-around crossover – much like the RAV4. But what should sell you on the Venza is its distinctive styling and smoother characteristics over the less refined RAV. And if that’s not enough, maybe the fuel economy figures will. Although there are no official EPA numbers yet, Toyota says the Venza gets 40 miles per gallon in the city, 37 highway, and 39 combined, with a total driving range of around 500 miles.

Buyers interested in picking up the base Venza LE can buy one for a reasonable $32,410. If you want a fully loaded Venza Limited like the one tested here, with options like a bigger touchscreen, faux leather seats, and the nifty Star Gaze panoramic roof, it will cost you more than $40,000. Yes, the RAV4 Hybrid is cheaper to start – at $28,350 – but it feels like Toyota has done enough to make the Venza stand out.