The Leaf still has what it takes to compete in this now-tougher segment.

Even with a mere 73 miles of range, the original Nissan Leaf was a pioneer. It was one of the first mass-market electric vehicles you could buy here in the US and helped ease buyers into electrification. But with more companies debuting better alternatives to the Leaf – like Chevrolet, Ford, Tesla, Polestar, and others – Nissan’s all-electric hatchback struggles to capture the same attention and share it once did.

Nevertheless, the Leaf is a better vehicle following its 2017 facelift, which included improvements to both the range and looks. The base version now drives up to 149 miles with its standard 40-kilowatt-hour battery pack, while a 62-kWh battery gives the Leaf Plus a range of up to 226 miles if you order the light, frill-free S trim. Three of us recently spent time in a Leaf Plus (though the SV model with a 215-mile range), and while it may no longer be our first choice, it's still a solid option in a booming segment.

In my first job writing about cars, my boss at the time, Seyth Miersma, stuck me in a first-generation Nissan Leaf for a night. He knew full well the 73-mile range was barely enough to complete the highway-heavy round trip and that I’d only have about 12 hours to recharge the battery (on a 110-volt outlet) before I’d set off for the office again. Seyth’s a funny guy.

While I spent the bulk of that two-way journey shivering with the heat off to maximize the range, I survived. The second-generation Leaf would have laughed at such a challenge. In fact, the 215 miles in the Leaf SV Plus would have suited my needs back then just fine – I could have completed the trek to and from work twice before I’d need to consider a recharge. How’s that for progress? 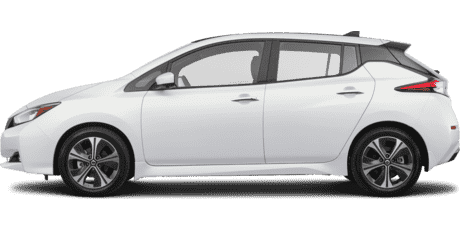 Now yes, I recognize that the Leaf’s range is well behind most competitors. The Chevrolet Bolt EV is this car’s closest competitor in form, function, and personality, and it can go nearly 45 extra miles on a charge. But I find the range argument exhausting as most people rarely cover more than 75 miles in a day, let alone 200. For the vast majority of shoppers, the Leaf’s 215 miles is more than adequate. Even in cold conditions, where you’ll lose some distance, the Leaf should still fulfill the needs of most people, especially if they have a home charging solution that’s better than a 110-volt outlet.

No, my main gripe with the Leaf is the same as it is with the Bolt: it’s incredibly dorky. The hatchback shape is practical and at the very least the styling is more conventional, but by and large the Leaf shrieks to other drivers that you’re a bit dull. Is this a bad vehicle? Not by a long shot – I genuinely like the Leaf’s mellow character and would happily complete my boring old commute with one. But with newer EVs promising more excitement in addition to extra range and faster charge speeds, this remains a product for a very small segment of the market.

The Nissan Leaf isn't just a good electric vehicle, it's a great all-around hatchback, regardless of what's powering it. Interior space is plentiful, steering feel is solid and responsive, the ride is nice and taut but not too firm, and the sound deadening is great (especially since there's no noisy gas engine). The Leaf is just extremely nice to drive on all fronts.

Powering our Leaf SV Plus tester is a 160-kilowatt electric motor and a 62-kWh battery pack. That combination results in an adequate – but definitely not segment-besting – 214 horsepower and up to 215 miles of range. And the Leaf does have solid oomph down low and offers more than enough passing power on the highway, assuming you don't drive around in Eco mode – it significantly dulls the throttle in an effort to save range, making it good for around town but ill-suited for the open road. Our biggest issue, though, isn't with the car so much as it is the public charging infrastructure.

It's 2020, and yet, finding a charging station in suburban Ft. Lauderdale, Florida, where I live and where I tested the Leaf, is still shockingly difficult – pun intended. Here's my anecdotal experience: In three different locations, half of the available charging stations were unavailable for use – the others were either non-functional, occupied by gasoline cars, or reserved.

But results will vary, and I’ll say with confidence that the Leaf SV Plus's 215-mile range is probably enough for most people. And if you have a home, live in an apartment with a garage, or have a plug at your office, the ability to charge over long stretches makes the Leaf Plus viable to many. But if you're reliant solely on public chargers (like me), living with the Leaf – or any EV – is stressful.

When Nissan started shipping the Leaf to the US back in 2011, every community college faculty parking lot became crowded with them. These days, we don’t see many of those early cars left on the road due to one fatal flaw: ambient air battery cooling. Any Leaf that was driven in a warm climate cooked the battery capacity due to insufficient thermal management, a problem made worse by DC Fast Charging. Almost every other electric vehicle uses a liquid thermal management system to keep temperatures under control. So, you would think Nissan has fixed the problem almost 10 years later, right? Wrong.

As Jeff mentioned, the Leaf Plus is a seriously good hatchback with plenty of range for any daily activity – we even achieved over 190 miles of highway range driving at a constant 70 miles per hour. It has a great safety suite as well, with Nissan ProPilot driver assistance providing acceptable lane centering and adaptive cruise control, as well as forward and side collision warnings and automatic emergency braking. However, no matter how good the Leaf is to drive or easy to live with for those with a charging solution at home, its fatal flaw remains.

Effectively, it’s nearly impossible to road-trip the Nissan Leaf, even on a mildly warm day. We found the first DCFC charging session on a road trip to be fantastic. The Leaf Plus’ 62-kWh battery pack pulled a 77-kW peak charging rate from an Electrify America CHAdeMO station.

The second and third charging sessions progressively slowed down the peak charging rate to protect the battery from overheating. What originally took about 45 minutes to fill the battery on our first charge extended to many hours. Easy to go about 350 miles in a day then, but any farther in one day will result in insanely limited charging speeds due to battery temperature.