Brilliant engineering let down by poor planning and messaging.

Let's establish one thing right off the bat: I was speeding. No question about it, the Michigan State Trooper had me and the red 2020 Cadillac CT5-V dead to rights, clocked at 91 miles per hour in a 70. I (futilely) argued I was keeping pace with the light traffic and that whatever speed I was traveling at was safe for the sunny, dry, calm conditions and freshly paved highway. It didn't matter – I've already mailed in the citation for “Speed Charged: 75/70” and a $115 check to the state of Michigan.

My colleagues were less than sympathetic. But then one member of the editorial peanut gallery chipped in with this comment: “Did you tell her the V isn't really a V anymore?” 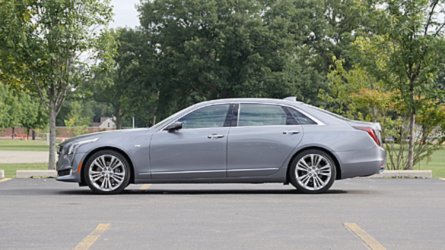 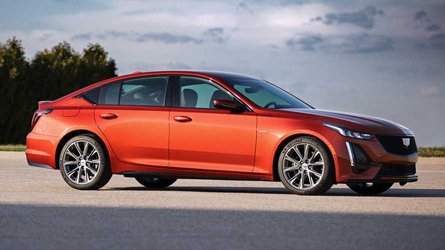 It's true, though. Cadillac's unique blend of arrogance and mismanagement took the hardcore V line and for no apparent reason demoted it to the junior varsity position held by V-Sport, the designation for more tepid sports sedans that weren’t agile or fast enough for the V name alone. This is a roundabout way of saying that what Cadillac showed in May of 2019 (and what I’ve been reviewing) isn’t a CT5-V – it's the CT5 V-Sport.

It's a shame the expectations inherent in full-fledged V cars overshadowed the CT5's 2019 debut – this is actually a fine driver's sedan, even if it isn't a full-blown V. From the moment I first accelerated onto the highway and toward my brush with cops, the twin-turbocharged 3.0-liter V6 began laying on the charm.

The V6, a member of the new turbocharged engine family GM introduced a few years back, isn't especially potent, producing just 360 horsepower and 405 pound-feet of torque. That’s down 60 hp and 25 lb-ft on the old CTS V-Sport's larger twin-turbocharged 3.6-liter V6 – the last CTS-V had nearly double the output, at 640 hp.

That said, the engine is eager to rev from idle on up to its 6,000-rpm redline. Mid-range performance is ample, but the V6's 2,400-rpm torque peak won't help customers thirsting for more off-the-line shove – rival engines, like the single-turbo inline-six in the BMW M340i, have a wider, more accessible peak (at the expense of 36 fewer lb-ft of torque) and consequently are more impressive in both a straight line and on a stopwatch – Cadillac claims a zero-to-60 of 4.6 seconds, two tenths behind the negligibly lighter M340i.

Part of the V6's revvy nature is down to the aggressive gearing of the 10-speed automatic transmission (the V shares its ratios with the standard CT5). We've driven numerous versions of this gearbox, jointly developed between General Motors and Ford, but the CT5 V-Sport CT5-V might have one of our favorite iterations. GM seems to have tuning for this transmission dialed in, as its manners were impeccable in everyday conditions.

Cadillac claims a zero-to-60 of 4.6 seconds, two tenths behind the negligibly lighter M340i.

Cracks showed up when set for more aggressive driving, though. The smallish metal paddle shifters were a joy to use while accelerating, but downshifting was more of a problem, even in the hardest-core Track driving mode. The transmission wasn’t too eager to drop multiple gears – you'd better plan on doing just that, though, because 10 forward gears means a lot of shifting.

In fact, on twistier roads, the computer and its performance shift mode was the better choice. Changes were just as quick while upshifting, but the V held out too long on downshifts, and I ended up feeling lower gears hit on corner entry or mid-way through the turn. The solution, of course, is a manual transmission – can the CT5-V Blackwing get here soon?

That foible aside, this pairing has a likable character, even in the relaxed driving modes. A smooth V6 engine note filled the cabin while accelerating, helped along by the Bose audio system. Results of this sort of sound enhancement are usually hit or miss, but the entire setup felt remarkably natural in the CT5-V. Wide-open-throttle upshifts delivered an exciting pop from the exhausts, regardless of drive mode or transmission setting, too, which served as a subtle, sporty touch. There was a lot of engine noise, though, even in the more relaxed driving modes. Cadillac should consider adding a wider range between the different volume levels.

Like the powertrain, there's good stuff happening in the handling department thanks to the CT5-V's Alpha platform (the same architecture used in the ATS, CTS, and Chevrolet Camaro).

A MacPherson-type front and five-link rear suspension underpins the Cadillac, which also features GM’s newest fourth-generation Magnetic Ride Control (MRC) system. A fixture in past Cadillac products, V-badged or otherwise, MRC is a welcome addition in the CT5-V and is a big part of the car's impressive balance of agility and ride comfort.

On rough roads or highways, it took an impressive amount of punishment to get past the V-specific MRC tuning. This setup isolated the cabin well and prevented impacts from having any influence on the direction of the car. The result was ample stability at a wide range of speeds (up to 91 miles per hour, I can confirm). But the overall comfort was even more respectable considering how the CT5-V handles.

Like the powertrain, there's good stuff happening in the handling department thanks to the CT5-V's Alpha platform.

The front/rear balance was excellent and the handling from corner entry to corner exit was flat and predictable. There was a huge amount of grip from the 245/40R19 Michelin Pilot Sport 4S tires, although aesthetically, the 19-inch wheels look kind of puny. All of this good stuff pales in comparison to the steering, though.

Whoever tuned the electric power-assisted steering at GM's Milford, Michigan proving grounds deserves a fat raise. The rack was almost perfect, with a small dead zone and incredible weighting. In Tour, the steering was heavy and substantial, and in Track, the heft increased (almost excessively) making it all the easier to dial in small changes. But more than that, the weighty steering was satisfying in every part of the corner. It broke my heart to have nothing but Michigan roads to present this sublime setup with – it deserves better.

The steering weight feels fitting for a performance car, but the drive-by-wire brake pedal isn't so enamoring. Fitted with smallish 13.6-inch front and 12.4-inch rear discs along with four-piston front Brembo calipers, the CT5-V certainly had plenty of stopping power for a 4,000-pound sedan, but it all came straight away. The brake pedal was too bitey and difficult to modulate. Heft and responsiveness are good characteristics for a brake pedal, but there's too much of both on the CT5. I'd be curious to try the V on the track – Alfa Romeo's brake-by-wire system is far better on a circuit, and I suspect the behavior of the CT5's left pedal would feel more natural there, too.

The CT5-V is a charming car to drive, but I question whether those charms can overshadow some of the confounding decisions Cadillac made in the design process. There’s a distinct lack of specialness in the CT5-V’s design.

For a start, pop open the door using the kitschy touch-capacitive door handles and slip behind the wheel – you'll find the same flat, unsupportive seats as the standard CT5. Your hands will grip the same oversized, underpadded steering wheel as the standard CT5. Your eyes will look out on the same adequate leathers and plastics as the standard CT5. Aside from a couple splashes of carbon fiber and the programmable V Mode button on the steering wheel, the V's cabin is indistinguishable from the base CT5 – Cadillac, if you're going to insist on calling this car the CT5-V and not giving it an absurd amount of horsepower, at least make the cabin feel as special as a V car should.

There’s a distinct lack of specialness in the CT5-V’s design.

There are other, cheaper, non-V issues, too. Our tester features the optional Bose audio system, which adds beautiful metal grilles to the upper speakers on the doors… but only there. Everywhere else, you get cheap black plastic. Some of the HVAC controls have a similar finish, which clashes with the other buttons that are cheap black plastic. The instrument cluster has an 8.0-inch display and analog gauges, but competitors (and the last-gen CTS) offer beautiful all-digital clusters.

There's more weirdness, though. On the dash, two knobs jut out, off-center, from beneath the 10-inch touchscreen for volume and tuning/zoom adjustments, but they're completely redundant – the exact same controls are on the center console. The physical home button below the screen looks and feels cheap, too. Do these things ruin the CT5? Hardly. In fact, if a customer is coming from another GM product, I doubt they'd notice. But if Cadillac wants to attract Mercedes-Benz, BMW, or Audi owners – the sort of vehicle the CT5-V seems designed to court – they're small annoyances you won't find on rivals.

The broadest problem for the CT5, though, is its size. This is a mid-size sedan, comparable to the BMW 5-Series, Mercedes-Benz E-Class, and Audi A6. But it's priced, drives, and feels like the smaller BMW M340i, Mercedes-AMG C43, and Audi S4. Each of those rivals is within a few thousand dollars of the CT5-V's $48,690 starting price, and can broadly match it for equipment without exceeding my tester’s $60,190 out-the-door price by too much. And yet, the German sedans are all lighter, quicker, more powerful, and feel more premium.

The CT5-V suffers from some of the same woes that have made GM's products so difficult to recommend over the past few years. By and large, it's well engineered (as are the Chevrolet Silverado and Traverse, Cadillac XT4 and XT6, and several others) and offers a competitive driving experience. But GM's failure to execute the small details, the things that push these products over the goal line and set them apart from the competition, is still missing.

The good news is that (aside from the notable lack of power) small things are more or less all that's wrong here. The CT5-V is a genuinely charming driver's car. Even if the CT5 isn't powerful enough for a V badge, it's engaging and has the right character. We just wish Cadillac put as much care into the rest of the package as it did the driving experience.