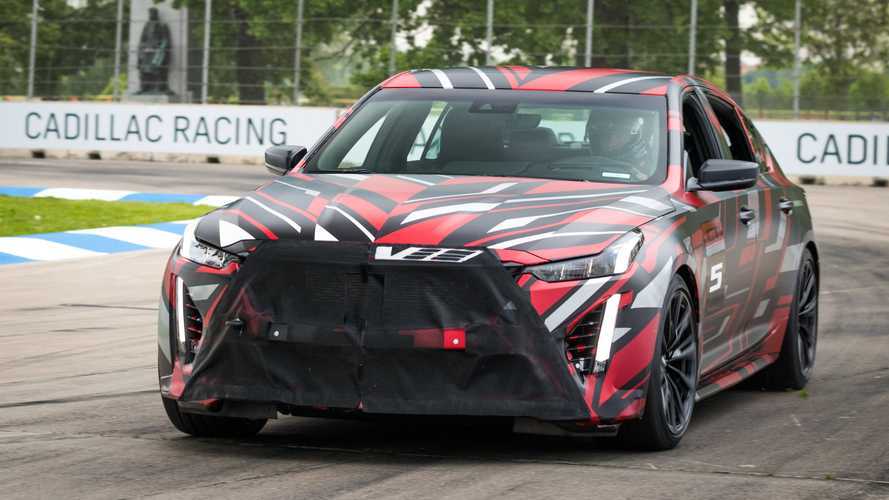 Here's to hoping for massive power figures that the V-Series deserves.

We can't deny that the debut of the new CT5-V and CT4-V has sprung quite a reaction from the fans of the performance sedans, particularly because of their rather conservative engine output numbers.

In the aftermath, however, Cadillac have something else in mind. At the Chevrolet Detroit Grand Prix, the carmaker surprises the crowd with a preview of two more V-Series prototypes, driven by General Motors president Mark Reuss himself and Ken Morris, vice president of product.

On a visual standpoint, it looks like the prototypes are just camouflaged versions of the recently-launched CT5-V and CT4-V. The red one carries the same face and rear fascia of the CT5-V, except for some minor differences like the side fender gills and horizontal slats on the air vents instead of mesh, similar to what the CT4-V carries.

The same holds true for the blue one, although it seems like the prototype carries a bigger lip spoiler than on the standard CT4-V.

In Light Of The Recent Debuts At The End Of May:

It seems likely so. We won't be surprised to see the twin-turbo 4.2-liter V8 Blackwing from the CT6-V in one of these new V-Series models upon their debut. Or at least that's what we are hoping for.

For now, all we could do is speculate until Caddie feeds us with more information. Feel free to join the discussion in the comments section below.