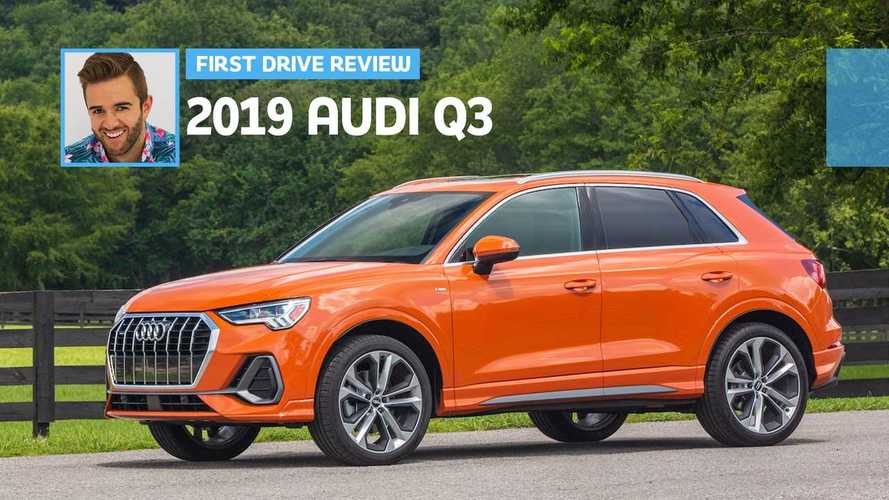 The new Q3 is a much-improved car, with traces of Q8 in its DNA.

Luxury compact crossover SUVs are one of the hottest items on the menu at the moment, and America’s appetite is only getting more ravenous. With so many vehicles competing for attention, it’s increasingly difficult to stand out from the bunch. Audi initially attempted to make a splash when the first-generation Q3 hit the U.S. market in 2015, after being on sale in Europe since 2011. However, It wasn’t very engaging to drive and offered little in the way of technology. Plainly speaking, nothing about it was special enough to command attention. So it hit the reset button with the 2020 Audi Q3, using the flagship Q8 as a North Star.

The result is a more aggressive-looking Q3, with bigger proportions and major design cues derived from the Q8. Sharp headlights run into an oversized octagonal front grille, and the optional S line appearance package adds stylized details to the car’s mug. The rest of the Q3 carries similarly assertive design details, especially the pronounced character line at the car’s belt and the angular taillights. All in all, the new car brings some much-needed flair that was previously absent from Audi’s compact offering, thanks again to the Q8’s guidance.

This Q3 is now 2.0 inches taller, seven-tenths of an inch wider, and 3.8 inches longer than the prior car, with the increased size benefiting cabin space. Rear seat passengers get 36.1 inches of legroom and 36.3 inches of headroom. Cargo space is also up by 2.0 cubic feet, totaling 18.7 cubic feet with all seats in place, and 48 cubes with the seats folded. The Q3’s cargo space jumps 5 cubic feet over the car it replaces to 23.7, beating both the Volvo XC40 and BMW X1 which offer 20.7 cubic feet, and 21.7 cubic feet, respectively.

While the car’s larger dimensions increase its appeal, Audi did the most impressive work in the Q3’s cabin design. A barrage of sharp angles and creases work with each other to create a modern and exciting interior. The S line-equipped test car we spent our day with also benefited from optional orange Alcantara trim pieces, which were just as fun as they were surprising given Audi’s traditionally restrained interior designs. Aluminum (or wood on non-S line models) inserts and large swaths of soft-touch materials line the cabin, with the only noticeable pieces of black plastic flanking the infotainment screen.

A 10.3-inch digital instrument cluster and an 8.8-inch central touchscreen are standard fare in the Q3, but the available pairing of a 12.3-inch Virtual Cockpit cluster display and 10.1-inch MMI touchscreen are a worthwhile upgrade ($2,000 on the Premium Plus, or standard on the Prestige trim). Again, following the Q8-lite theme, the optional infotainment setup is identical to that of Audi’s more premium models, the Q3 forgoes its higher-end siblings’ touchscreen climate controls for physical buttons, though. This is a forgivable concession given the Q3’s more attainable starting price.

Even without CarPlay, the native infotainment content is among the best in the industry.

The car’s (no-cost) wireless CarPlay integration is a nice touch and never once froze or glitched during a full day of testing. Even without CarPlay, the native infotainment content is among the best in the industry, punctuated by Audi’s stellar Google Maps-based navigation. The system is a joy to use and arguably sets the new standard for the segment. That said, this touchscreen collects fingerprints with a propensity that truly boggles the mind. Audi ought to sell every Q3 with a screen wipe as standard kit.

Regardless of trim level, every Q3 comes with a turbocharged 2.0-liter four-cylinder making 228 horsepower and 258 pound-feet of torque. This engine, also found in the Volkswagen GTI, improves upon the previous car by 28 hp and an impressive 51 lb-ft of twist. The engine is paired to an eight-speed automatic transmission. Compared to the 2018 model, which achieved 20 miles per gallon city, 28 highway, and 23 combined, the new Q3 earns slightly worse fuel economy across the board: 19 MPG city, 27 highway, and 22 combined.

Our drive around the Nashville, Tenn. area included some surprisingly exciting pieces of road, where the petite Audi fell shy of engaging but exhibited impressive refinement. The Q3’s over-boosted electric steering was smooth but provided minimal feedback around the smalltown backroads. With a heavy foot, the GTI-sourced engine packed enough punch to move the 3,900-pound crossover along without issue. The engine operated with minimal noise entering the cabin, which deserves praise over the competing Lexus UX’s buzzy four-pot. While the aforementioned eight-speed is slower to the trigger than others in the segment, it still operated quietly in the background and seldom misbehaved during our time behind the wheel.

But what the Q3 lacks in driving pleasure, it makes up for in overall comfort. The non-adaptive suspension is soft and forgiving, soaking up bumps big and small, even with our test car’s bigger 20-inch wheel option. If you’re steadfast in pursuing a livelier crossover, then go for the rear-wheel-drive-based BMW X1. Otherwise, the Q3 aces the areas you’d expect from this class of vehicle, equalling or bettering anything else from Germany, Japan, or Sweden.

The 2019 Q3 is already on sale with trim levels that follow the traditional Audi structure: Premium, Premium Plus, and Prestige. The base car starts at $34,700, though it quickly swells with the addition of convenience and safety features. The Prestige model we spent the day in adds $6,900 to the base car’s sticker, however, it packs on desirables such as adaptive cruise control with stop-and-go assistance, the 10.1-inch infotainment system with navigation, and a killer Bang and Olufsen sound system. Personally, the $150 orange Alcantara interior trim is a must-have as well.

Audi’s reset on the Q3 is a success, mostly due to its high-end, Q8-inspired details. Though not everything is a home run improvement (namely the decreased MPG and nominal cargo space gains), there is enough here to make it a top-tier option in a relentlessly tough segment.