Utah’s State Route 210 rises about 3,500 feet over the course of a nine-mile, curvy run from suburban Salt Lake City to Sugarloaf Mountain. That’s a fast climb – about 400 feet per mile but it’s nothing compared to the uphill battle Toyota’s first U.S. office fought in the late 1950s to convince postwar farmers that they should bypass all-American Jeeps for a near-copy called the Land Cruiser.

More On The Land Cruiser: 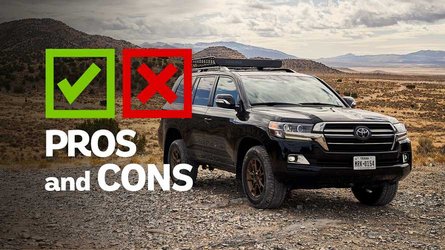 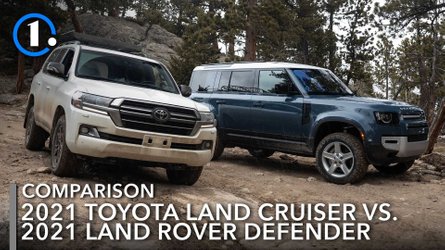 The plucky, unrefined open-top Land Cruiser that Toyota first plied to Americans was far from an immediate success. Of the 288 Toyotas sold in the U.S. in 1958, just one was a Land Cruiser. A redesign a few years later made the truck more capable, and it developed a reputation for durability unmatched by the comparatively archaic Jeep CJ. Flash forward 60-plus years and the 2020 Toyota Land Cruiser is once again a blip; its share of the automaker’s sales was higher in 1958 than it was in 2018 when the Japanese automaker sold 2.1 million vehicles in the U.S. Just 3,200 of those were $86,000 luxury SUVs wearing the storied Land Cruiser badge.

For a company built on market share, the Land Cruiser is now the one fighting for its existence in the U.S.

Some smaller dealers haven’t seen a Land Cruiser in inventory in years. Those showrooms won’t be blowing out the candles for the Land Cruiser name’s 65th anniversary, which the automaker is commemorating in soft style with the limited-edition Heritage Edition. And those dealers will miss out on the love letter Toyota penned to its longest-running model.

The 2020 Land Cruiser Heritage Edition follows the Porsche model of offering less for more. It stickers for a staggering $88,970, including a mandatory destination charge, or about $2,300 above the base model. Add $425 for Blizzard Pearl white paint, unless the standard Midnight Black works for you. Heritage Editions drop the running boards, center console, and third-row jump seats of the regular Land Cruiser. Justifying the price hike are 18-inch forged BBS wheels painted an attractive bronze and a Yakima roof basket. Inside, the black leather seats feature bronze accent stitching, and Toyota swapped the gray headliner for a black one that manages to make the spacious interior feel rather cramped. Only D-pillar badges, modeled after those used on the iconic FJ40, give a nod to the model’s prodigious global history.

A gray Mercedes-AMG E63 wagon roars past the lumbering black Land Cruiser I pilot up Cottonwood Canyon on this overcast fall day. Lost in the E63’s dust, I realize that the Land Cruiser is an enigma, a four-by-four that feels like nothing else in the Toyota lineup and yet couldn’t have come from any other automaker. If a Corolla is a commodity, the Land Cruiser is an heirloom. Its 5.7-liter V-8 emits a distant growl, sending 381 horsepower to all four wheels through an eight-speed automatic transmission and shuttling the nearly 6,000-pound – yes, really – behemoth toward 8,500 feet above sea level posthaste.

Underneath, the tame Dunlop Grandtrek AT23 rubber’s tall sidewalls deliver a plush, exceptionally comfortable ride. The independent front and coil-sprung solid rear axle suspension is classic SUV, albeit with a trick. The Kinetic Dynamic Suspension System is not a new technology – Toyota has been using it for over a decade – yet it’s remarkable for its simplicity compared to the massively complex air suspensions found under competitive Land Rovers and Mercedes-Benz products. Put simply, the system uses hydraulic actuators to automatically adjust the sway bars to keep the body remarkably flat during hard cornering or to allow impressive articulation on rocky trails.

On top of KDSS, a host of off-road traction control modes, and a crawl system that lopes the big ‘ute along at a walking pace, help overcome the modest rubber. As a four-wheeler, the Cruiser lives up to its pedigree. As a luxury truck, perhaps not so much.

If a Corolla is a commodity, the Land Cruiser is an heirloom.

No discussion of the Land Cruiser’s comfort would be complete without remembering that it is functionally almost identical to the Lexus LX 570. Lexus finds about 50 percent more new LX owners annually than Toyota does Land Cruiser buyers, something not terribly surprising considering the trucks cost about the same even though the interior of the Lexus is sharper and dressier and its warranty is longer.

The Land Cruiser sold to Americans is the dressiest version of a wagon sold in nearly every country (don’t look for one in Canada, however), which also offer far more utilitarian forms of the model. In Africa, the Middle East, and Australia, the Land Cruiser earns its keep as a serious work truck that hustles everyone from diamond mine workers to diplomats in remotely dangerous and dangerously remote locations. In some markets, the global Land Cruiser 200-Series, as it’s known to Toyota faithful, even comes equipped with a snorkel intake that’s useful for dustier and wetter environments.

It’s no surprise, then, that the Land Cruiser reveals its rugged roots in a few places. Its interior is light on dressy materials expected on trucks half its price. The leather is a step above Toyota norm, and the front seats are both heated and cooled, but that’s where the plush bits stop. Hard plastics dominate the lower door panels and center console, and the fake wood on the dash, doors, and steering wheel looks pixelated up close. The list of $90,000-plus vehicles that lack Apple CarPlay and Android Auto compatibility is mostly consolidated to limited-production supercars – and the 2020 Toyota Land Cruiser. Heck, even the Lotus Evora adds a CarPlay-compatible infotainment system for 2020, though that British sports car doesn’t have a system that grabs the inner front disc brake to tighten its turning radius at low speeds off-road.

For A Certain Crowd

The Land Cruiser’s appeal is in its relative subtlety. Well, it’s at least as subtle as a 6,000-pound SUV can be. Its positioning suggests quiet wealth, although even Toyota isn’t entirely sure just who’s buying the big truck. The automaker’s U.S. marketing arm confided to us that it doesn’t track Land Cruiser buyer demographics because of the truck’s low volume, although an average income of six figures is a given. Those Land Cruisers tucked into mega-mansion vacation home garages near Aspen and Park City weren’t sold because of a carefully cultivated marketing message. Toyota hasn’t run a TV ad for the Land Cruiser in years in the U.S.

In many ways, the Land Cruiser isn’t unlike the hopped-up Mercedes wagon that flew past me on its way toward a seven-figure home at the top of Little Cottonwood Canyon. Mercedes’s E-Class wagon is a staple among the elite, a quiet rejection of “expected” luxury sedans. Both the Mercedes wagon and the Land Cruiser are under-the-radar models that are far more popular outside of the U.S.

The Land Cruiser’s appeal is in its relative subtlety.

For Mercedes, justifying the E-Class wagon in the U.S. isn’t tough. It has knocked its Audi and BMW competition out of the market (for now). For Toyota, however, the challenge is greater. The Land Cruiser must do battle with swanky Range Rovers and Mercedes-Benz G-Class SUVs. And for a company notorious for its bean counters, the Cruiser’s atrocious 14 mpg combined rating must have some red pens eager to cross it off of next year’s roster.

For now, the Land Cruiser sticks around and Toyota denies that the Heritage Edition is the model’s swan song in the U.S. The Heritage Edition feels more like a resignation letter than a tribute, though. It would be a sad day for this big bruiser to disappear entirely from our market.

Notably, the Toyota Land Cruiser is on our list of the Best SUVs for Towing.