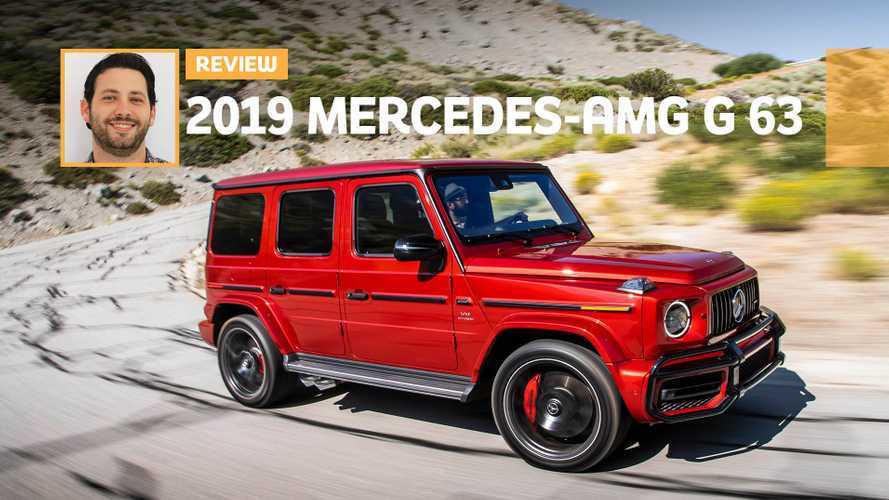 Nothing but a G thang.

The 2019 Mercedes-AMG G63 throws sensibility out the window. It accelerates like a sports car but its burdened by the extra weight of its formidable off-road kit; it’s got the goods to theoretically take on just about any off-road obstacle but it rides on sticky summer tires that struggle to find grip on anything but tarmac. If common sense drives your vehicular purchasing decisions, then the G63 is not for you.

Ain't Nothin But A G Thang:

However, those with the means to welcome a little irrationality into their lives are sure to love Mercedes-AMG’s high-performance SUV. Like a SEMA concept come to life, the G63 is stupid-fun in the best ways possible. Sure, a Mercedes-AMG GT is a better on-road performance car and the less powerful Mercedes-Benz G550’s standard all-season tires offer greater off-road performance (real off-roaders will want to slap on knobbier all-terrain rubber, though), but there’s something innately satisfying about driving a nearly three-ton SUV that's capable of out-accelerating many sports cars.

With a starting price of $147,500, the G63 costs a cool $23,000 more than a G550. Is the AMG-badged box really worth the extra money over its lesser Benz branded sibling? That depends. While the standard G is plenty powerful and luxurious, the AMG model’s extra power, dynamic improvements, and more sporting looks give it an appeal that’s matched only by the more expensive, $178,500 Land Rover Range Rover SV Autobiography Dynamic. (This G’s $166,095 as-tested price, however, narrows the price gap.)

The G63 has all the trimmings of a luxury machine, though, and it sports standard equipment such as soft leather seats, heated and power-operated front seats with memory, heated rear seats, tri-zone automatic climate control, a power sunroof, and a 12.3-inch infotainment screen with navigation and Android Auto and Apple CarPlay compatibility. Noticeably missing, however, are features such as a proximity key or power cargo door, neither of which are optionally available. Blame the exterior door handles, which the latest G63 shares with its predecessor, a vehicle whose origins date back to 1979. A time well before the advent of keyless entry, let alone proximity keys.

Despite its familiar looks, the 2019 G63 shares only the aforementioned exterior door handles, headlight-washer sprayers, and spare tire cover with its forebear. Mercedes’s flagship SUV stands out for its simple, purpose-built design, and the latest iteration of the G63 benefits from 6.0-inch wider front and rear tracks.

A number of AMG-specific cues such as the addition of the performance sub-brand’s now-ubiquitous Panamericana grille, a more aggressive lower fascia hidden behind a chunky bull bar, flared fenders, burly side exhaust pipes, and a set of 20-inch wheels and tires make the G63 look even more audacious than its G550 counterpart. The G63 we're testing, however, takes things a few steps further, courtesy of a $2,300 coat of Designo Cardinal Red paint, and the $3,950 22-inch wheel and tire package.

It’s no less charming inside the G63, which combines modern Mercedes amenities with classic G cues such as an upright windshield, shallow dashboard with prominent buttons for the locking differentials, and a large grab handle fore of the passenger seat. That said, the G63’s cabin marks a far greater departure from tradition than its exterior. Alongside new features such as cup holders integrated into the center console and a fold-down rear armrest, the G63 also benefits from a big 12.3-inch dashboard-mounted infotainment screen, a meaty three-spoke steering wheel, and an array of attractive metal, plastic, and leather pieces. We’re particularly fond of the air vents and door-panel grab handles, which possess craftsmanship and quality worthy of this SUV’s six-figure price tag. Adding to this tester’s interior’s appeal is $1,300 in Designo open-pore ash wood and a steering wheel wrapped in $500 of leather and faux-suede. Meanwhile, the engine wears a $1,500 carbon-fiber cover.

With 1.5 inches of extra leg and shoulder room up front relative to the previous model, the new G63 is more comfortable than ever. This tester is all-the-more cushy by way of the $7,200 Exclusive Interior Package Plus that adds items diamond-stitched leather, a faux suede headliner, a leather-covered dashboard, and heated, ventilated, and massaging front seats.

Nor are those in the rear forgotten about, as the G boasts a massive 5.9 inches of extra legroom and 1.1 inches of additional shoulder room over the old model. The extra space works in conjunction with standard heated outboard rear seats and a fold-down rear armrest (something missing from the previous G) to make the 60/40 split-folding three-across rear bench a legitimately comfortable place to rest up.

Still, the G63 is no S-Class, and Mercedes’s big box is sure to let down those in search of the brand’s flagship sedan’s rear-seat accommodations in an SUV package. Fortunately, Mercedes is reportedly at work on a Maybach variant of its GLS-Class, which ought to offer opulence worthy of the ultra-luxury sub-brand.

The cargo area is another sore spot for the G63, as its swing-open gate is not power operated and requires considerable force to close. Although the cargo bay is reasonably sized, the lack of a flat load-floor upon folding the rear seats limits its overall versatility.

In spite of the arrival of MBUX, the G63 continues to rely on Mercedes’s older COMAND infotainment system. With a standard 12.3-inch central display that includes an in-dash navigation system and Apple CarPlay and Android Auto compatibility, the setup remains impressively intuitive to use. Most commands are available via a centrally mounted control knob and touchpad, although two small touch points on the left and right steering wheel spokes afford control of the system’s functions, as well.

Analog gauges come standard, however, this G63 includes an optional 12.3-inch digital instrument cluster. At $850, it’s a bullet worth biting as the cluster’s graphics are as crisp and clear as fresh spring water, as well as highly configurable.

There’s no reason a nearly three-ton SUV needs to scoot to 60 miles per hour in an estimated 4.4 seconds, but the G63 says hell to reason and does so anyway. Key to the bulky box’s performance is its hand-built, twin-turbocharged 4.0-liter V8 engine that produces a monstrous 577 horsepower and 627 pound-feet of torque. That’s 20 horses and 111 pound-feet of twist more than the supercharged V8 in the Range Rover SVAutobiography Dynamic, which needs an estimated 5.1 seconds to reach the mile-a-minute mark.

While AMG spruces up the G’s performance, this is still an off-road machine at heart and the nine-speed automatic transmission pushes the engine’s grunt to all four wheels courtesy of a standard four-wheel-drive system that includes a transfer case with a dedicated low range and locking center, front, and rear differentials. Further assisting things are three AMG-specific off-road drive modes: Sand, Trail, and Rock.

Good luck off the beaten path, though, as the G63’s road-oriented tires are sure to struggle in the dirt and dust. On pavement, though, this G’s $3,950 worth of 22-inch wheels and Goodyear Eagle F1 rubber prove impressive tools. Grip is surprisingly plentiful, and the adaptive dampers do an impressive job of keeping body motions at bay without ruining the ride quality in Comfort mode (Sport and Sport+ make for a noticeably stiffer ride).

Further assisting the G63’s on-road performance is the four-wheel-drive system’s default torque split that sees 60 percent of the engine’s grunt sent rearward (the previous model sent 50 percent of the engine’s oomph to both axles), big 15.7- and 14.6-inch front and rear brake rotors (1.7 and 1.0 inches bigger than the units on the lesser G550), and a new independent front suspension system in place of the old G’s live front axle.

No, the G63 isn’t a sports car, but it is laughably quick and far more fun to drive and composed than an SUV this enormous has any right to.

Neither the National Highway Traffic Safety Administration (NHTSA) nor the Insurance Institute for Highway Safety (IIHS) has crash-tested the G63. Testing aside, Mercedes equips its most powerful G-Class with modern safety kit such as blind-spot monitoring, rear-cross-traffic alert, lane-departure warning, lane-keeping assist, automatic high-beam headlights, adaptive cruise control, and forward collision alert with automatic braking and pedestrian detection. A surround-view system is optional and adds $400 to the bill.

Noticeably missing from the options sheet is lane-centering or Mercedes’s Distronic Plus semi-autonomous driving system.

Fuel efficiency is not the G63’s forte and the brick-like SUV drinks premium-grade gas at an EPA-rated 13 miles per gallon in the city, 15 mpg highway, and 14 mpg combined. The G63 manages these figures courtesy of a cylinder deactivation system that cuts fuel to half of the V8’s cylinders when conditions permit. For comparison, the EPA rates the Range Rover SVAutobiography Dynamic at 14 mpg city, 19 mpg highway, and 16 mpg combined.