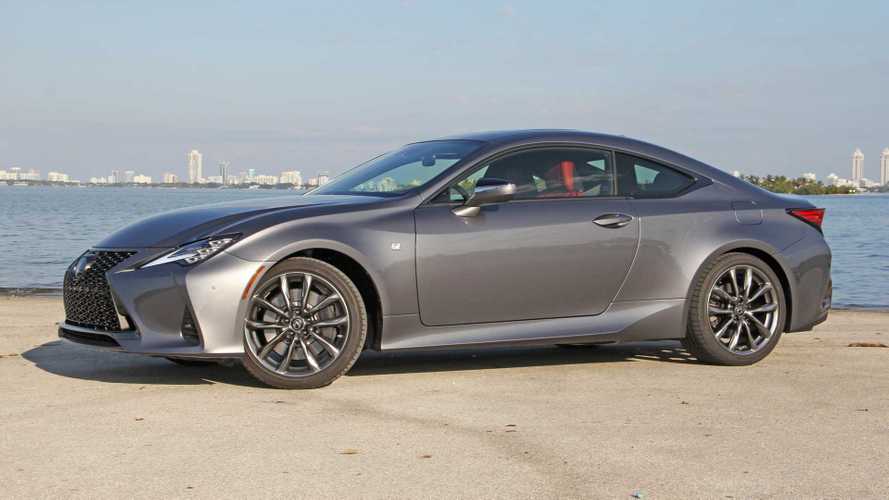 Lexus’s entry-level coupe gets a nip and a tuck for 2019.

Fashions come and go, and the 2019 Lexus RC ditches its half-decade old looks for updated styling that brings the brand’s latest design details to the luxury coupe. Accompanying the model’s new looks are minor revisions to the interior and infotainment system. The underpowered powertrains, however, remain untouched.

Lexus replaces the blobular tail lamps of yore with a pair of sharper looking units, which include LED light strips that mimic the style of vehicles such as the Lexus LC coupe, ES sedan, and NX crossover. Meanwhile, more shapely exterior mirrors, subtle tweaks to the front and rear fascias, and new wheel designs bless the RC with a more cohesive look that complements the two-door luxury coupe’s athletic proportions.

Resting on a chassis that combines elements from the Lexus IS sedan, the since-departed IS Convertible, and the larger GS sedan, the RC’s stiff underpinnings add extra mass to the model. (The RC weighs 154 pounds more than an IS.) Suspension tweaks and improvements to the electric power steering system attempt to combat the effects of this on the RC’s lateral dynamics, and the coupe subsequently turns in and takes to corners with slightly more confidence than before.

Of course, it doesn’t hurt that my Nebula gray test car is an F Sport model, which adds trim-specific suspension changes, a set of adaptive dampers, and 19-inch wheels wrapped in sticky summer rubber to this mix. The combination blesses the RC with surprising lateral confidence when set to its most aggressive Sport + drive mode, and an impressively comfortable ride in the default Normal setting. (There are also Eco, Sport, and Custom settings, the latter of which allows driver personalization.)

This F Sport is also fitted with the optional Torsen limited-slip rear differential (at $390 it’s a steal), and Lexus’s trick variable gear ratio steering and rear-wheel steering setup ($1,900). In spite of its seemingly complicated nature, the steering adjusts ratios with a practically unnoticeable fluidity. The tiller weighs up nicely through turns and relays just enough information to the driver’s hands to add a modicum of additional confidence.

Once again, power comes courtesy of a 241-horsepower 2.0-liter turbocharged inline-four in the rear-drive RC 300. Stepping up to the RC 350 nets a 311-hp 3.5-liter V6. The all-wheel-drive RC 300 employs a 260-hp 3.5-liter V6. Although all-wheel-drive RCs rely on a six-speed automatic transmission, rear-drive models, such as my RC 350 tester, push power to the ground by way of an eight-speed automatic gearbox that serves up smooth and unobtrusive shifts.

Lexus estimates the four-cylinder RC 300 requires 7.3 seconds to hit 60 miles per hour and claims the six-cylinder RC 350 gets there in 5.8 seconds.

Lexus estimates the four-cylinder RC 300 requires 7.3 seconds to hit 60 miles per hour and claims the six-cylinder RC 350 – like my tester – reaches the mile-a-minute mark in 5.8 seconds. While the RC 350 offers plenty of oomph for most drivers, the model still falls far short of the 320-hp BMW 440i’s estimated 4.8-second trot to 60 mph. Several factors are likely to blame, but it certainly doesn’t help that the RC 350’s 280 pound-feet of twist peaks at a screaming 4,800 rpm. That puts the Lexus 50 pound-feet behind the Bimmer, which sees its torque peak at just 1,380 revs.

Alas, the model’s most egregious cockpit troubles endure. Its backseats are too short on space to comfortably fit full-size adults, while its infotainment setup still relies on the brand’s wonky console-mounted touchpad controller that all-but requires the driver to temporarily ignore the road to view the cursor’s position on the standard 7.0-inch – or available 10.3-inch (with navigation) – dash-mounted screen. At least, the RC is finally available with Apple CarPlay (it’s standard across the board).

More attractive than ever, the 2019 Lexus RC’s styling improvements, minor interior changes, and adoption of Apple CarPlay certainly make it better than ever. Still, its most pressing problems persist. As is, the RC remains in need of a diet (or more power) and a more ergonomically friendly infotainment system to truly stand out as more than just a fashion statement.