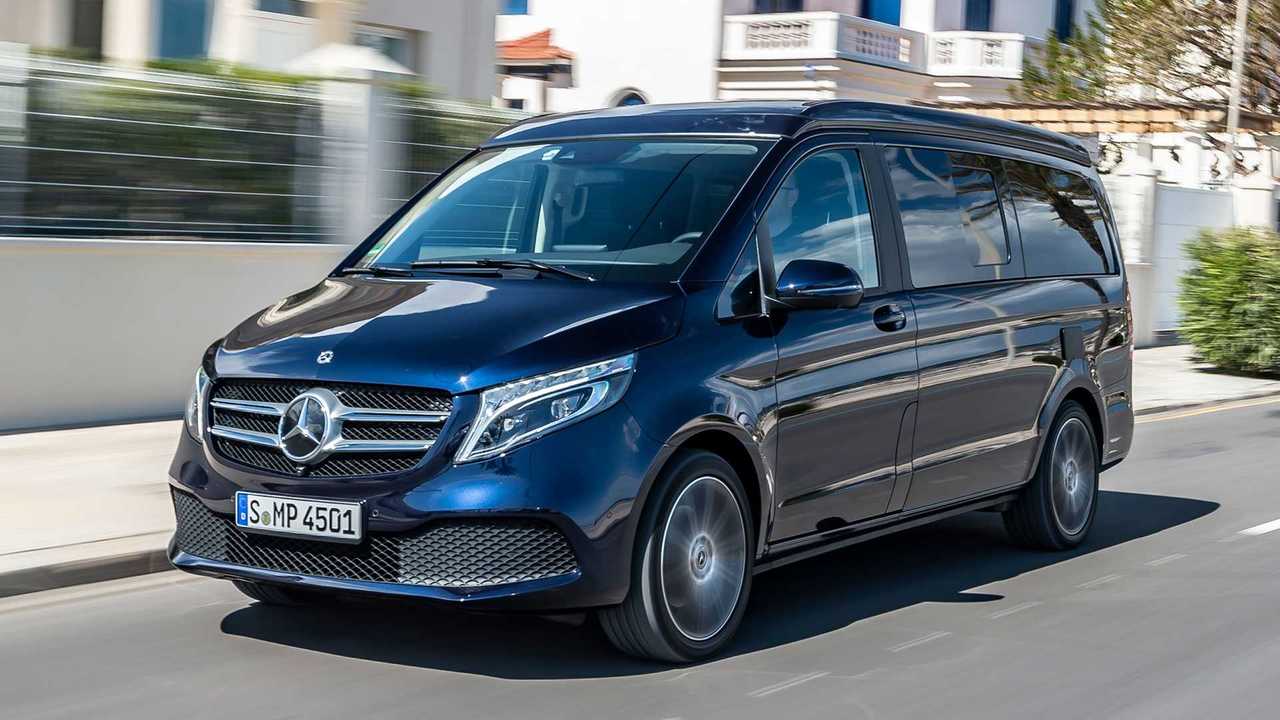 How to enjoy three-pointed star accommodations while on the road.

The Mercedes-Benz Marco Polo. Unless you’ve visited Europe, and paid particular attention to the back of every van you see, chances are you’ve not heard of this model from the three-pointed star. It's Mercedes-Benz’s camper, and more a day van than what we’d consider on this side of the Atlantic as an RV. We’ll not be seeing it in the USA, either, as Mercedes-Benz Van’s head of marketing, Dr. Marion Friese, said the company considers it too small for the American market. We’ll let you be the judge of that, though.

The Marco Polo is based on the European V-Class, a minivan-cum-commercial vehicle that keen-eyed van-spotters among you might recognize as the U.S.-market Metris. Mercedes-Benz is unique among its premium, upmarket competition by putting its three-pointed star on far more than luxury and high-performance cars, increasingly adding it to a truck, a line of commercial vans, and yes, even a camper. In Europe, at least, the brand’s depth is as expansive as it is inclusive.

That might sound like the stuff of cramped camping nightmares, but the Marco Polo’s a cleverly considered camper. You can choose how homey it is. The standard Marco Polo comes with cupboards, a couple of gas burners, a fridge, wardrobe, table, sink with fresh and waste water tanks, and an electrically powered pop-up roof with a small double bed (not unlike the Volkswagen California camper we drove last year). Fiddle with the rear seats and there’s another “double,” though it’s far from generously proportioned.

If sleeping space is your priority, then the Marco Polo Horizon chucks out all the furniture and instead looks to all intents and purposes like a five-seat minivan. There’s a triple bench seat behind the rotating driver and passenger front seats. The larger rear seat lays flat to create a more properly sized double bed. There are blinds, a pair of camping chairs, a table, and, if you specify it, a roll-out sun shade/rain shelter. It’s all very clever, the packaging is superbly considered and the fit and finish all befit something wearing the three-pointed star upon its sizable front grille.

The Marco Polo is small in stature, but it’s big on quality.

The interior lighting wouldn’t disgrace an upmarket nightclub, and the flooring is more bespoke kitchen than family vehicle. The Marco Polo is small in stature, but it’s big on quality. There’s also an overnight heater that’ll keep you toasty through the night, so, in the interest of proper testing, that’s exactly what we did.

There’s a beautiful hotel near me, but we’re in its parking lot out back; coffee on the stovetop and pasta on the boil. The Marco Polo’s scale does mean you do without a bathroom, the assumption being that you’ll park at a campsite that offers restrooms and showers. And if you’re in the wild? Well, that’s between you, the night, and the wildlife…

There’s a full-on dinner and a proper bedroom in the hotel, but there’s real joy within the Marco Polo. My kids go nuts any time I’ve borrowed one, or its Volkswagen California alternative, and I defy any adult without an ounce of joy in their soul not to derive some childlike pleasure from the Marco Polo. There’s the promise of self-sufficiency and adventure – in real comfort.

This version of car camping is more glamping than anything else. The Marco Polo is a day van that doubles as an occasional, enjoyable overnighter. You’d not want to spend weeks in it, but it’s great for the odd night away, and a good bit of this report was typed up in the back of the van. It’s a mobile office, too, then.

Using it all is as easy as ever. It works best for solo travelers or for couples camping, as the floorplan allows the “downstairs” to serve as a lounge/kitchen/diner/office, and the upstairs space to make do as a bedroom. You’ll lift the roof at any opportunity when parked, because doing so allows you to stand upright if you’ve got the mattress stowed.

Drop that bed and you’ll need a touch of suppleness and strength to climb up there to sleep, but once you’re there the mattress is more than comfortable for a good night’s sleep. There’s a USB socket for charging your devices, LED directional lights, and zip-openings to let in fresh air. Mercedes has thought of everything really; the Marco Polo is very much the definition of a multi-purpose vehicle.

The Marco Polo is very much the definition of a multi-purpose vehicle.

It takes minutes to pack it all away, and turn this sleeper back into a daily driver. It doesn’t feel cumbersome on the road, either; its size is not so ungainly that it’s burdensome to drive or maneuver. There’s all manner of driver safety and convenience features, this being a Mercedes-Benz after all, and the commanding driving position and huge IMAX-like view out the vast windscreen is the envy of any SUV driver.

New to the Marco Polo in this mild refresh is the same 2.0-liter four-cylinder turbodiesel power plant that’s available in the E-Class sedan, as well as the company’s slick-shifting nine-speed automatic transmission. In the 300d guise, this makes for a kitchen sink that accelerates to 62 miles per hour in just 8.6 seconds thanks to 239 horsepower and 369 pound-feet of torque. If you’re in less of a hurry and want to keep the cupboards tidy in the back, then there’s a 220d, which makes do with 163 hp. And the Marco Polo cruises so easily and quietly you’ll want to double-check that you’ve packed the cutlery in the back properly, otherwise you’ll hear it rattling about.

If there’s one area that betrays its van origins it’s the Marco Polo’s ride. It’s very good by van standards, but there’s still the odd shimmy and shake that underlines its ultimate lack of sophistication. There’ll never be an AMG version, though you can have some of the look with an AMG Line trim.

It may be too small for the US, and likely too expensive (its price in Europe converts to around $80,000 at today’s rates), which is a real shame. The Marco Polo can be everything to everyone: a Mercedes-Benz that doubles as a room, a canteen, office, lounge, and has the spirit of adventure its name suggests. It’s a premium recreational vehicle that Europeans have embraced, and we’d argue there’s a case for having it here in the USA, too.