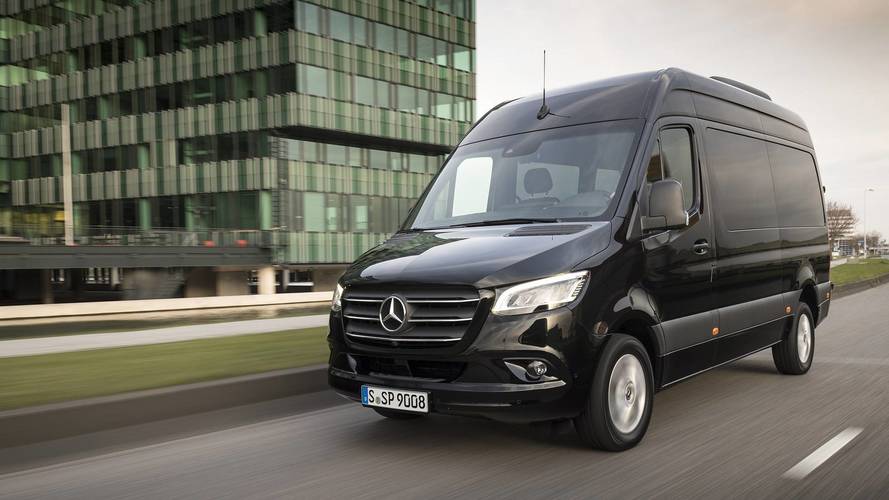 The van is better from top to bottom, and features the next generation of Mercedes infotainment technology.

There are only two passengers riding with me aboard the 2019 Mercedes-Benz Sprinter I’m driving, but we could easily fit six more people if need be. With three rows of seating behind me – that’s four rows total – the Sprinter is a big, roomy vehicle. Yet behind the wheel, things are relaxed and easy. Navigation directions appear in a crisp color display ahead of me, wind and road noise are low (for a van), the power steering is fingertip-light and extremely accurate, and power delivery from the 3.0-liter turbodiesel V6 is strong. As driving full-size vans goes, the new Sprinter makes life pretty good.

Visual changes on the outside are minor, which is probably fine given that many Sprinters will end up slathered in company graphics and decals anyway. Inside, though, and under the sheet metal, there are countless changes that improve the Sprinter in every way, whether you elect a passenger van, cargo van, or even the pickup-like chassis cab option.

The most important upgrade to the 2019 Sprinter is the new MBUX infotainment system – officials emphasize that it’s pronounced M-B-U-X, as in “User Experience,” not “embux.” It debuts in the Sprinter and will also feature in the new A-Class, and will eventually roll out to other new Mercedes models in due time. Notably, it has a touchscreen and does away with the rotary knobs/touchpads that have until now been the chief method of operating older Mercedes infotainment systems. The on-screen graphics are crisp, clear, and simple to understand. The home screen consists of a carousel of icons, which you tap to enter, say, the media or phone menus. Neat graphics include a three-dimensional rotating image of your van; simply tap the appropriate part of the vehicle to adjust settings.

In addition to touching the screen, though – you can pinch, swipe, and all the other motions you’re used to from your smartphone – MBUX has two other interface modes. A little touchpad on the right-hand side of the steering wheel allows for swiping through and “clicking” menu items, just like the existing function in cars like the S- and E-Class. An identical touchpad on the left-hand side of the steering wheel is for manipulating the full-color trip computer that sits between a pair of analog gauges.

The other method for using the infotainment system is by voice control, activated by the hotword, “Hey Mercedes.” Similar to how you might summon Amazon’s Alexa or Google Assistant, the idea is that you can simply start talking and have MBUX respond. In practice, it needs a bit more tweaking: the system activated pretty much any time we mentioned “Mercedes” while behind the wheel, and the natural-language commands (e.g. “Hey Mercedes, I’m hungry” to find a restaurant, or “Hey Mercedes, call my boss” when you’re running late) didn’t work in my test vehicles. Hopefully these kinks will get ironed out by the time the Sprinter goes on sale.

The 2019 Sprinter also benefits from a huge number of new active-safety technologies that, while now commonplace on other Mercedes models, are new to the van world. For starters, there are various types of cameras. In the U.S., a backup camera is standard, with base models showing the camera’s view in a little screen integrated into the rear-view mirror. Sprinters with MBUX will show the camera output there instead. A 360-degree camera system is optional, and works with the parking sensors to display warning lines if you’re driving toward an obstacle. If there’s something in your path – say, a small wall you forgot about – Drive Away Assist limits the van’s speed to a lazy three kilometers per hour (less than two mph) so any impacts become bumps not bangs. And as to visibility out front, the windshield adopts the “Wet Wiper System” windshield wipers that, as on cars like the SL-Class, spray washer fluid from the wiper blades, rather than nozzles on the windshield, so the view forward is obscured for less time.

In addition to alerts when the van departs its lane, Active Lane Keeping Assist will apply the Sprinter’s brakes to keep it on its intended path. Adaptive cruise control becomes available to ease long-distance highway journeys. Traffic Sign Assist displays a pop-up of speed limits or other information in the instrument cluster – and if enabled, will sound an alert chime when the driver exceeds the speed limit. LED headlights are offered for improved nighttime visibility. And the Sprinter also adds blind-spot monitoring with rear cross-traffic alert; especially given that cargo vans are lengthy and may lack rear windows, Mercedes officials say this feature alone could prevent a lot of crashes.

Fleet managers will enjoy using the Mercedes Pro Connect software. It allows a fleet operator to log into a web interface and locate all his or her vehicles on a map, as well as see historical data about fuel efficiency, distance driven, and maintenance needs for the vans. The manager can set up geofences to get alerts if drivers go off-course, and can instantly send navigation destinations to drivers remotely. And because vans equipped with Pro Connect already have a modem, the 2019 Sprinter will offer a Wi-Fi hotspot.

For the driver, neat storage compartments abound. I find lockable bins above my head, cutouts below the infotainment screen that perfectly hold my smartphone, and various cubbies between driver and passenger. In cargo vans with three-abreast bench seating, the cupholders move to the top of the dashboard so there’s more kneeroom for passengers. Also up on the top of the dash is optional wireless phone charging in yet another cubby space.

Passengers, too, enjoy more storage: every single seat now can store a beverage, thanks to pop-up cupholders beneath each row of seats. And special cradles mounted to the van’s sides can hold a phone, with a special cut-out at the bottom from which to snake a charging cable to the adjacent USB port. The aforementioned Wi-Fi hotspot can be optioned on passenger models so occupants can post selfies during their journey. And Mercedes even says it has improved the air conditioning systems to keep those passengers cooler, too.

The passenger version of the Sprinter I drive first in the day is the most representative of American-market models. Its diesel engine is rated for 190 horsepower and 325 pound-feet of torque, the latter of which delivers strong acceleration with broad, easy punch through the rev range. Of course, that’s strong acceleration by van standards: to keep at the 130 kilometer-per-hour (81 miles per hour) speed limit on a stretch of windy highway requires a heavy foot on the throttle. Still, at no point does the van feel too slow to keep pace with traffic.

Despite its length, weight, and height, the 2019 Sprinter truly does feel easy to drive, as if the van wraps around you. Its turning radius is nimble, aided by lots of steering angle up front. Forward visibility is incredible, perched as the driver is above the sloping nose, while massive mirrors with convex spotter mirrors almost obviate the need for the blind-spot warning system. Handling is reasonably composed and mostly free of any untoward wallowing or bobbing.

In terms of powertrains, the U.S. market will receive the aforementioned diesel V6 with a seven-speed automatic, as well as a 2.1-liter turbodiesel inline-four (161 hp, 265 lb-ft) with a seven-speed, and a 2.0-liter turbo gas engine (188 hp, 258 lb-ft) with a nine-speed automatic. Fuel economy figures are not available yet, but the new Sprinter should be about five percent more efficient than current models.

Overseas, of course, you can buy your Sprinter with a six-speed manual gearbox. I spend some time behind the wheel of a four-cylinder diesel with the stick-shift and have a great time – who ever expected I’d be rev-matching while driving a Mercedes truck with concrete blocks loaded into the cargo area? But if I were actually delivering packages all around European cities all day long, I’d elect the super-smooth shifts and ease-of-use of the automatics.

European Sprinter customers can also opt for front-wheel-drive versions of the Sprinter. The benefit is that there’s a 3.1-inch lower load floor and a 110-pound greater payload rating compared to equivalent rear-wheel-drive vans. But Mercedes officials say that in conversations with American van buyers, front-drive is seen as too “weak” for commercial vehicles, so rear-drive will be the only option here. Mercedes additionally will offer all-wheel-drive versions.

The 2019 Sprinter goes on sale in the U.S. at the end of this year. That coincides with the opening of an expanded van factory in North Charleston, South Carolina, that will build almost all U.S.-spec Sprinters (the chassis cab will still come from overseas). Mercedes broke ground on the factory expansion in 2016, investing $500 million and adding a claimed 1,300 new jobs. By building the Sprinter on American soil, the company will avoid paying import tariffs on commercial trucks – an archaic law known colloquially as the Chicken Tax.

The biggest takeaway from driving the 2019 Mercedes Sprinter is that it makes van tasks simpler. For passengers, there are more amenities to make journeys more pleasant. For drivers, improved telematics and a better-than-ever driving experience – plus lots of safety tech – should ease the strain of long days behind the wheel. In other words, if you need to move a lot of people or a lot of stuff, the Sprinter will help lighten the metaphorical load. Suddenly a gig as a delivery driver doesn’t seem quite so bad.