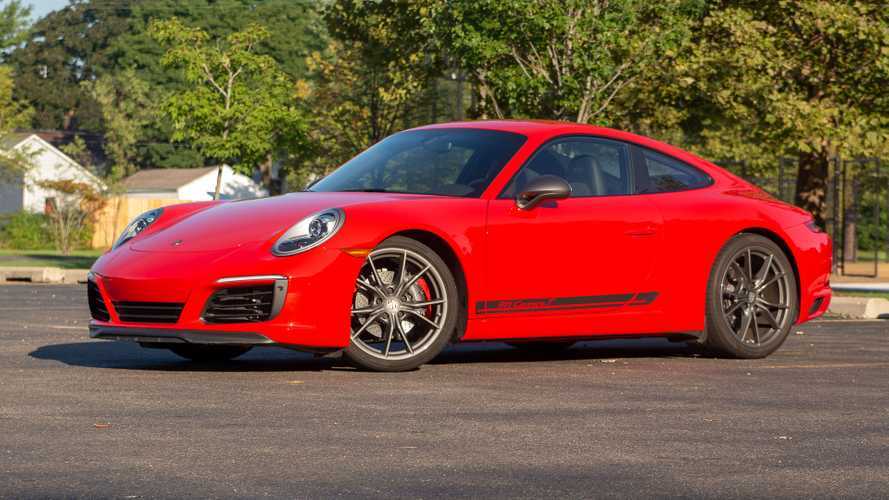 Ask an enthusiast what Porsche 911 they recommend, and you'll probably receive the safe answer: A two-wheel-drive Carrera S. Affectionately called the 911 C2S – as opposed to the all-wheel-drive Carrera S, or C4S – this model still strikes the right balance of price, performance, and accessibility for drivers of all levels. And like all Porsches, it's almost limitlessly customizable.

But I suggest we enthusiasts change the safe answer to the 2018 Porsche 911 Carrera T. It ticks the rear-wheel-drive box, and while it has the same 370 horsepower as the standard 911 Carrera – rather than the 420 ponies of the C2S – the T comes with or makes available many of the performance goodies that are exclusive to more powerful Carrera S, as well as the more badass 911 GT3. Even better, the T’s starting price is $3,000 less than the C2S.

That price tag is only part of what makes the Carrera T such a strong offering. While a car that starts at $102,100 is categorically not cheap – it's $11,000 more than the base 911 Carrera, after all – the savings over the $105,100 C2S are a powerful motivator. Equally powerful motivation is what comes standard on the Carrera T and how much of it is either unavailable on the base Carrera or unavailable on every 911 outside of the most hardcore RS models.

That latter category is an interesting one. The Carrera T shares its lightweight rear windshield and quarter window glass and low-fat door panels with the 911 GT2 RS and GT3 RS. And like those cars (as well as the 911 GTS and standard GT3), there's less sound deadening, so the sound of the twin-turbocharged 3.0-liter flat-six is just a little more noticeable. And if you're willing to pay, you can add the GT2 RS and GT3 RS models’ standard bucket seats and rear-seat delete to the Carrera T.

Compared to the base Carrera, the T packs the Sport version of the brand’s Porsche Active Suspension Management (PASM) as standard. In fact, this particular goodie isn't even available on the base 911. Twenty-inch wheels also come standard, whereas the base car wears 19s. And if you're clever enough to go with the seven-speed manual, you'll score a short shift lever and the Carrera S's limited-slip differential and torque vectoring system, which Porsche, again, doesn't offer on the standard car. Finally, the Carrera T offers rear-axle steering as an option, which – guess what – isn't available on the base Carrera (but it’s a must-have feature everywhere else).

My lightly equipped tester packs the optional seven-speed dual-clutch transmission, heated front seats, and rear-axle steering. The as-tested price is just $108,620, not including a $1,050 destination charge.

The 911 is already a handsome car inside and out, but the Carrera T tweaks the design to stand out just a bit more. Gunmetal wheels come standard, as do dark mirror caps, Carrera T side graphics, and in back a pair of off-set, center-exit exhaust pipes like those on the 911 GTS but finished in the same gun-metal look as the side graphics and wheels. These adjustments work together well, making the Carrera T look sportier and more stylish – kind of like a budget-priced GTS.

The cabin is largely the same as the standard car’s despite a handful of special lightweight bits. Fabric door straps replace traditional handles – and look positively awesome. While my tester didn't carry the optional full bucket seats, I'm sure they look equally remarkable. Other than those modifications, this is the same 911 interior you'd find on a base Carrera or Carrera S. That said, it’s all solid and well-built. The 911 feels like it will last for 100 years or more.

Two-door sports cars with firmed-up, lowered suspensions, and reduced sound-deadening hardly qualify as comfortable, but the Carrera T does earn some points for its excellent front seats. Even the manually adjusted chairs that come standard on the Carrera T are comfortable and supportive. There are few better ways to while away long drives, to the point that I question the need for the available 18-way adaptive seats.

Unsurprisingly, the second row is next-to useless. There's so little space for the head or legs, that I’d hesitate to even call the 911 a four-seater. It’s more like a 2.5-seater.

The 911 also loses points for its tiny frunk. Like the standard Carrera, the T has just 5.1 cubic feet of cargo space, almost half of the 10.1 cubes available in the Mercedes-AMG GT. Thankfully, the cramped rear seat’s lack of legroom makes it the perfect place to store soft items if the frunk is full, and when those chairs are folded, there's an additional 9.2 cubic feet of cargo space.

Despite Porsche’s reputation for extensive option sheets, it's possible to enjoy a minimally equipped 911. For example, the only thing close to a luxury option on my tester were its $700 heated front seats. But since it came standard with Bluetooth, xenon headlights, Apple CarPlay, a 4.6-inch digital instrument gauge, and two-zone automatic climate control, the short option sheet wasn't an issue.

That said, paying $700 for heated seats and $1,100 for push-button start (which the 911 technically doesn't have – you twist a fixed nub while keeping the actual key in your pocket) on a $102,000 car is kind of silly. Still, I can't complain about the sheer level of optional equipment and customization features on the 911.

Aside from maybe a head-up display or an air-suspension system, the 911 Carrera T offers a tremendous range of optional goodies. LED headlights (in both standard and smoked varieties), adaptive cruise control, 18-way seats, ventilated front seats, a heated steering wheel, and a fantastic Burmester audio system are all available for customers willing to pay. While I wouldn't call this tester well equipped, it wouldn't take more than $6,000 to $8,000 to make it a far more palatable choice as a daily driver (although that's before getting into the ridiculous aesthetic options Porsche offers customers).

My 911 Carrera T came standard with a reasonably sized seven-inch touchscreen. The system is responsive but unattractive, and features a black and gold color scheme with last-generation graphics. The menus are also something of a mess, which makes navigating the various functions difficult. Knobs and buttons you expect to do one thing, like change the radio station by frequency, instead cycle through presets…unless you're in the right part of the radio screen. The larger screen and software coming to the next-generation 911 (which will include a T variant) will mark a tremendous improvement over my tester's. That the Carrera T carried Apple CarPlay as standard, though, helped matters.

The Carrera T features the same twin-turbocharged 3.0-liter flat-six as the base Carrera. And like that car, it produces 370 horsepower and 331 pound-feet of torque. Both the Carrera and Carrera T make peak horsepower at 6,500 rpm (1,000 rpm south of redline) and peak torque between 1,700 and 5,000 rpm. With the Sport Chrono Package (standard on the T and optional on the base Carrera) and PDK, both cars hit 60 miles per hour in four seconds flat. So why not just buy the base car and pocket the $10K premium the Carrera T demands?

That's a fair argument. But the appeal of the Carrera T comes with its lack of speed relative to siblings like the 911 GT3 and GTS. The engine revs eagerly, and you can wind it out without fearing for your license. At low engine speeds, the flat-six feels particularly fervent and engaging. Push past the 6,500-rpm torque peak – it's easy, I promise – and the Carrera T takes on more and more of the GT3's personality, rather than losing steam like some potent turbocharged engines. It sings a smooth and pleasant tune. Every time I ran the flat-six toward redline, I became a little more appreciative of the lack of sound deadening. The Carrera T sounds delicious.

A fly in this ointment may be the seven-speed dual-clutch transmission – but that’s not because it's bad. The Carrera T is without a doubt faster with the PDK, which remains one of the best automatic transmissions on the planet. It's competent and composed in everyday conditions, and quick to engage from a standstill, unlike some DCTs. But switch the 911 to Sport Plus via the rotary knob at the steering wheel center's five o'clock position, and the PDK's character changes. In automatic mode it's far more willing to hold gears, while shift speed in both automatic and manual modes is faster and more aggressive. Put simply, you feel the upshifts more; particularly under wide-open throttle.

Despite the “Sport” designation attached to its suspension, the Carrera T's PASM setup is remarkably poised over the rough roads that blanket southeastern Michigan. The 911 has always made sense as an everyday driver and the Carrera T is no exception. But when presented with a twisting road (which we Michiganders have in much shorter supply…), this 911 comes alive.

The fast, direct steering has perfect weighting and plenty of feedback. There's just enough body roll to inform the driver of lateral grip levels, but the Carrera T – like pretty much every other 911 – never feels sloppy. Body motions – be they fore, aft, or laterally – always feel purposeful and well managed. Alongside the lowered ride height, Porsche stiffened the sway bars and attached more rigid mounts for the rear subframe. It all makes for a very compelling package.

Adding to that package is the optional rear-axle steering system. Priced at just $2,090, it has an outsized effect on how the 911 handles, making it feel tighter and pointier and more willing to change directions suddenly. At higher speeds, the Carrera T is more stable. This option really is a no brainer.

Less of a no-brainer are the optional carbon-ceramic brakes. My tester had the standard setup and they were perfectly fine, thanks to their solid, predictable pedal that provides adequate feedback. The only case where I can see spending $8,520 for the carbon-ceramic brakes is if regular trackwork is in the cards, and frankly, if I'm shopping for a 911 to take to the track, I'll look at a used GT3 with CCBs instead of a new Carrera T.

And that's the most important takeaway from my time with the Carrera T. The T is as engaging and as enjoyable as the GT3, but where it takes a track to truly appreciate the GT3's capabilities, the Carrera T is enjoyable in more relaxed, everyday conditions.

The National Highway Transportation Safety Administration and Insurance Institute of Highway Safety have not crash-tested the 911, so I can't comment on passive safety. As for active safety gear, my tester had next to nothing. That said, the Carrera T isn't exactly a Volvo when it comes to semi-autonomous equipment. Adaptive cruise control and blind-spot monitoring are only available as options.

If you want stuff like automatic emergency braking and lane keeping assist on your 911, then I recommend checking out the upcoming 992 model.

Working in the Carrera T’s favor? Standard HID headlights and excellent sight lines in every direction.

While the Carrera T features the same power output as the standard Carrera, for some reason, and despite its lightweight gear, this 911 is significantly less efficient. The EPA estimates that the Carrera T will return 20 miles per gallon in the city, 26 mpg on the highway, and 22 combined with its seven-speed dual-clutch transmission. Grab the manual and the city figure falls to 16 mpg, while the highway and combined figures drop to 25 and 20 mpg, respectively.

At the same time, the standard 911 Carrera nets 22 mpg city, 30 highway, and 25 combined. Manual Carrera Ts feature a more aggressive rear-end than the base Carrera, but my tester had the PDK, which shares its rear-end with the standard car. I’ve reached out to Porsche to see if there's some piece of gear on the Carrera T that explains its lower fuel economy figures. I’ll update this review as soon as I hear back.