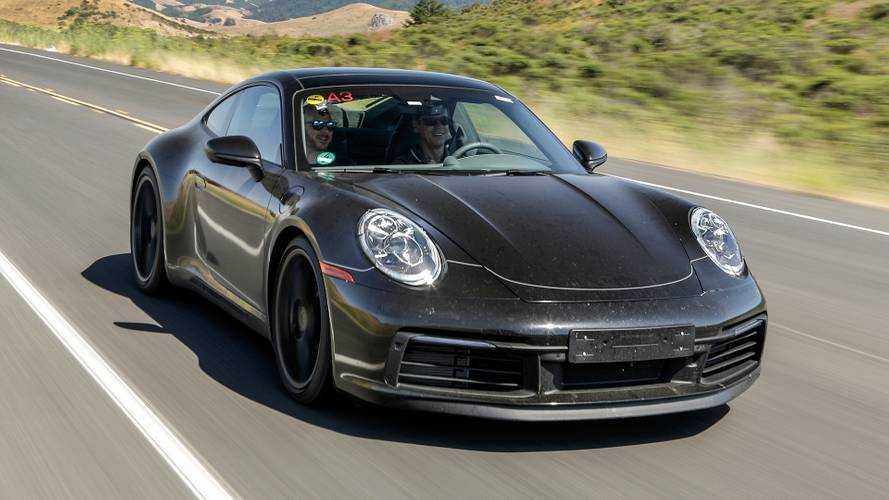 Future-proofed, but with an eye on the past.

When Porsche introduces a new 911, the automotive world takes notice. Not because there’s any likelihood of it looking different from the last one, but because everyone’s interested in seeing how Porsche will improve on one of the world’s most accomplished all-around sports cars.

Even here in pre-production form undergoing final testing on the West Coast of America, the “disguised” 911 strikes a familiar shape. There are revised rear lights just visible under the body cladding that bring a new look to the model, but overall, this is clearly a Porsche 911.

This new 911 is designated the 992 series. It replaces the current 991 series and is slated to be shown in full at the upcoming Los Angeles Auto Show, likely as a 2020 model.

Before that, though, we’ve managed to hop in the passenger seat alongside a veritable “who’s who” of Porsche personas tasked with validating the 992 as it reaches the sign-off stage prior to its LA unveiling.

Sitting behind the wheel as we ride shotgun is “Mr. 911,” a.k.a. August Achleitner, vice president, Product Lines 911/718. Achleitner is joined by Matthias Hofstetter (director, Powertrain Product Lines 911/718), Andreas Pröbstle (project manager, Complete Vehicle Model Lines 718/911, and Alex Ernst (team leader, Testing). These three, among many others, will drive the 992 thousands of miles to ensure that it meets, and exceeds, customers’ expectations once the rear-engine sports car arrives in showrooms early next year.

The development drive is in San Francisco and the greater Bay Area, as the local conditions (i.e. weather, altitude, road surfaces, and driving conditions – read traffic) are ideal for testing. We’ll be riding along in one of four Carrera S models. The cars are a mixture of rear- and all-wheel drive models, and regular and Sport Chassis options. Three of the cars rely on Porsche’s quick-shifting PDK transmission. One car, however, uses a traditional seven-speed manual transmission. It’s a bit of an oddity in this company, as the Carrera S will initially be launched exclusively with the self-shifting gearbox. (Fear not, manual fans, as the seven-speed stick will join the entire Carrera line-up when non-S Carrera arrives early next year.)

Porsche has prepped the transmission to accept an electric motor.

The PDK in the 992 is a different unit compared to the current model’s, as Achleitner explains:

“This is a completely new transmission for the 911. The PDK is now [an] eight-speed, taken from the new Panamera but with a changed layout.”

Notably, Porsche has prepped the transmission to accept an electric motor (although the space for that theoretical motor goes unoccupied for now). This doesn’t mean a gasoline-electric hybrid 992-series 911 is a guarantee, though, as Achleitner is quick to point out that current battery performance isn’t yet good enough for Porsche to push the technology into its famed sports car.

Still, this hasn’t stopped Porsche from preparing the car for the inevitable day that battery technology catches up to the performance demands of the 911. There’s a double-layered space in the body to house the eventual battery packs, which, like the gearbox casing, remains empty for the time being. Even so, the new transmission weighs about 44 pounds more than the current seven-speed PDK. In order to offset the extra mass of the transmission, Porsche employs additional aluminum in the body of the 992. Retaining the weight of the existing car has been one of the goals, and Porsche claims it’s succeeded in achieving this.

Achleitner shares that “there will be no narrow-bodied Carrera,” this time around, and that all 992 models will wear the wide rear hips of the Carrera S prototypes present today. While the rear-end width happens to be the same size as that of the current 911 GTS and GT3, engineers managed to increase the front track of the new car by 1.57 inches (40mm). The Carrera S rides on staggered wheels, with 20-inch fronts and 21-inch rears wrapped in 245/35 ZR20 and 305/30 ZR21 rubber, respectively.

There’s plenty of grip too, and Achleitner and his team – evidently in a hurry – hustle the 992s up a winding canyon road at extralegal speeds. The car’s wider track allows engineers to install more forgiving anti-roll bars that aid turn-in, improve traction, and give the Carrera S an inherent agility without negatively impacting ride quality. There’s assistance here, too, and the optional rear-wheel steering on the car I’m riding in further sharpens turn-in response.

Achleitner’s engine man, Hofstetter, has done a great deal of work to enable the 992 to pass both ever-stricter emissions and consumption regulations, while still exceeding the performance figures put up by the car it replaces.

The characteristic flat-six howl remains apparent even though it’s a forced-induction engine.

Power comes courtesy of a revamped twin-turbocharged 3.0-liter flat-six engine. There’s a new intake system, revised cooling (the intercoolers now sit on top of the engine rather than on the sides), revised turbocharger housings, a new exhaust, and piezo fuel injection. Shorter paths, quicker spooling turbos, reduced temperature, and more precise fuel injection all work in the 992’s favor and further improve the immediacy of the powertrain’s responses.

The Carrera S is said to produce 450 horsepower and 391 pound-feet of torque, which is enough oomph to push the rear-drive Carrera S to 60 mph in less than 4.0 seconds. Meanwhile, the base (non-S) Carrera will use a detuned, 385-hp variant of the engine in the Carrera S.

The powertrain of the Carrera S in which I'm riding responds with fervor, and the twin-turbocharged engine pulls strongly to its redline with the enthusiasm of a naturally aspirated unit. U.S. cars are unhindered by exhaust filters and sound all the better for it. The characteristic flat-six howl remains apparent even though it’s a forced-induction engine, and some amusing cracking and pops are emitted from the exhaust pipes on the overrun.

As in the past, there’ll be higher performance derivatives above the Carrera and Carrera S, including Turbo and Turbo S trims – the latter of which will reportedly pack a 650-hp punch. The rumor-mill is full of news of the next-generation GT3 and GT3 RS, as well, and whether or not the motorsport cars will follow the forced-induction route of the Carrera twins. Nobody’s saying anything today, but the collective Porsche fanbase is hoping turbocharged GT3s are still a few years off.

The 992 has to move with the times, though, and there’s some new technology and assistance systems to appeal to customers who expect convenience items in their German sports car. As such, the 992 will be available with items such as lane-keeping assist, lane-departure warning, and a night vision system, the latter of which will be an optional piece of equipment (it’s likely that the aforementioned lane tech will be bundled in with a package that also includes adaptive cruise control).

What is definitely standard fitment, though, is a new Wet detector system. Linked to the Wet mode (one of several driving modes that also include Normal, Sport, Sport+, and Individual settings), the 992 features acoustic sensors in the front wheel wells that detect water on the road surface and adjust the stability control system, gearbox settings, and rear wing position to help the driver maintain stability in the wet. Achleitner says it’s useful as the 992 is relatively light and rides on wide tires. The Wet detector system operates automatically, and independent of the windshield wipers. After all, standing water is not synonymous with rainfall.

A proximity key with push-button start is also standard, and the 911’s door handles cheekily pop out to meet you as you approach the car. Options include the usual list of choices such as a 0.39-inch (10mm) lower Sports Chassis, a throatier exhaust system, the aforementioned rear-wheel steering system, and Porsche’s Sport Chrono package (which traditionally includes a stopwatch and steering-wheel-mounted controls for switching between the drive-mode settings). A choice of carbon ceramic discs (PCCB in Porsche-speak), as well as Porsche’s new PSCB (Porsche Surface Coated Brakes), will also be available.

The interior remains largely disguised during our ride, but what’s impossible to hide is the large analog tachometer and its 7,400 rpm redline. The tach is framed by a pair of configurable screens, such as those in the Panamera and Cayenne. The dash-mounted, center touchscreen appears to be pulled from the Panamera and Cayenne, as well.

We’ll have a proper look inside the next-generation 911 in LA next month, and we expect to have the opportunity to formally drive the car early next year. But today, from the passenger seat, the 992 appears to follow the path of evolutionary change that’s marked the model for more than 50 years.