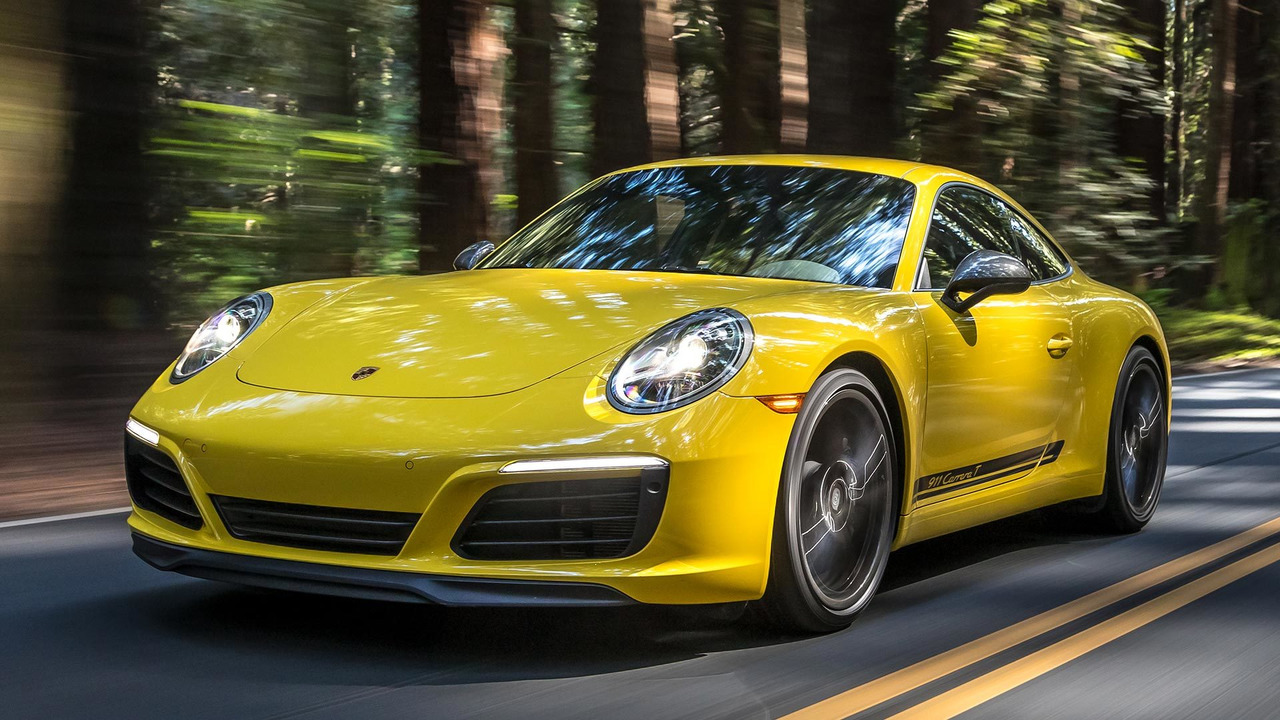 Porsche has split the difference between the 911 Carrera S and the GT3 with a charming middle child.

All the motivation needed to moderate your speed while driving a hot rod new Porsche 911 variant over the Mayacamas Mountains from Napa Valley to the Sonoma coast is the periodic appearance of an oncoming logging truck carrying a load of redwood tree trunks.

Such vehicles create the mental impression of the least forgiving possible obstacle in the event of a collision. They also litter the roads with red-tinged bark skins that evoke the appearance of never-ending roadkill.

Not done talking about 911:

Porsche Allegedly Prepping Not One, But Two 911 Plug-In Hybrids

So the mil-spec precision of the 911 Carrera T’s steering and the FDIC-backed bankability of its handling are crucially important to extracting speed without unwanted thoughts of life insurance payments intruding on the fun.

That the new Carrera T (The “T” stands for “Touring”) delivers the goods under these conditions should be no surprise, considering that it is effectively Porsche’s interpretation of the Chevrolet Corvette Grand Sport: maximum chassis from the high-performance model combined with the excellent base engine.

This recipe is designed to provide the handling of sports car partisans’ dreams at an accessible price, and absent the possibly unnecessary power of the uplevel Turbo’s engine.

In the case of the Carrera T, the minimalist approach extends to the use of thinner, lighter glass for the windows and, my favorite detail, substitution of a simple weight-saving nylon pull strap for the interior door release handles. That’s hard core!

The Carrera T is also barren of sound deadening, which has the bonus of providing an unfiltered soundtrack of the melodious 370-horsepower 3.0-liter turbocharged flat-6 engine. The less lyrical result is unimpeded access for the drone of the 245/35 ZR 20 front and 335/30 ZR 20 rear tires over the pavement, which can be loud enough to make listening to the radio at less-than-shouting volume a bit challenging.

Grab the optional lightweight sport seats, and the Carrera T gets even racier, ditching the ornamental back seat. Choose the comfier power-adjustable seats and you’ll still get the upholstered rear parcel shelf masquerading as a back seat.

The manual transmission-equipped car is loaded with cool technology, starting with a double-plate clutch and dual-mass flywheel; automatic rev matching on downshifts; Porsche Torque Vectoring to help point the car by braking the inside rear wheel in turns; and mechanical rear differential lock to apply the power to the ground effectively. Another welcome upgrade is the manual shifter’s shortened throws, for even more reflexive gear changes.

The PDK allows the driver to let the car’s Teutonic brain do all the thinking for the shifts (if they don’t want to use the steering wheel-mounted paddles to trigger gear changes). As long as the car is in the appropriate driving mode for the situation, the Carrera T’s PDK will faultlessly select the optimum gear. In Sport+ mode, that means the transmission will aggressively downshift into curves, producing in concert with the co-conspiring bypass-flap-equipped muffler heroic audio accompaniment that will flatter any driver.

Porsche fortified the Carrera T’s suspension by lowering the ride height 10 mm (0.39 inches), bolting in stiffer anti-roll bars, and fiddling with details like the more rigid rear subframe mounts that reduce any vagueness originating from the rear wheels.

Optional rear-axle steering also makes the car feel tidier in tight corners. A side benefit is that the turning radius is reduced by 1.6 feet, so maybe you won’t curb that wheel whipping a U-turn. In a place where it is legal to do so, of course.

Drop the hammer on this purebred plaything and it will sizzle to 60 mph in just 4.0 seconds in its PDK guise and 4.3 seconds when shifting for yourself. These times trim a second off the regular 911’s acceleration times, mostly thanks to the shorter rear axle ratio, which provides notably livelier acceleration out of low-speed switchbacks.

Acceleration continues through the quarter mile, which the PDK reaches in just 12.3 seconds, followed shortly by the manual car at 12.7 seconds. Top speed is 182 mph for the manual and 180 mph for the PDK, due to differences in gearing.

We experienced the stupendous brakes (330-mm cast-iron rotors and four-piston monobloc aluminum calipers, front and rear) by hauling the Carrera T down from speed in time to stop for a roadside stand near Calistoga boasting fresh-picked strawberries. “Nice car,” remarked the youthful attendant at the stand. Indeed, we agreed.

We followed that with another brake test to ogle an accumulation of ancient pickup truck front ends. The row contained just the front bodywork, making them an array of automotive Mardi Gras masks, arranged in their fading, oxidized glory and worthy of a tribute stop by Stuttgart’s latest.

Through all the turns, the brakes engaged smoothly and powerfully, making trail braking into decreasing radius turns utterly uneventful, even over the surprisingly poor surface quality of the roads. That myth of smooth California roads? Yeah, it is a myth, at least in this portion of Napa.

For those of us inclined to be attracted by the Cayman’s smaller size and price tag, the 911 Carrera T marks an appealing way to get into a similarly pure sporting machine for a similar price tag. It is also an avenue to Porsche’s deservedly lofty reputation for the gorgeous sound of the flat-six engine, which is no longer available in the Cayman.

For all the complaining that the 911 is getting too posh and too dear, the Carrera T signals a real return to the model’s sporting roots. It is a direction we heartily endorse.

For all the complaining that the 911 is getting too posh and too dear, the Carrera T signals a real return to the model’s sporting roots.

The Carrera T is identifiable by a black stripe above the rocker panels, a slightly protruding front mini-splitter, and a rear spoiler that rises higher when deployed. The standard wheels are 20-inch, ten-spoke Carrera S wheels in Titanium Grey, with satin black as an option. Or the chunkier five-spoke 20-inch Carrera Sport wheels in Titanium Grey are another alternative.

In the 911 business, anything in the neighborhood of the six-figure threshold has to be considered a bargain, and when the car you get for that money is stripped only of needless weight and is equipped with the important performance goodies, it’s a value we’ll applaud every time. Especially if it helps us dodge intimidating logging trucks in the process.