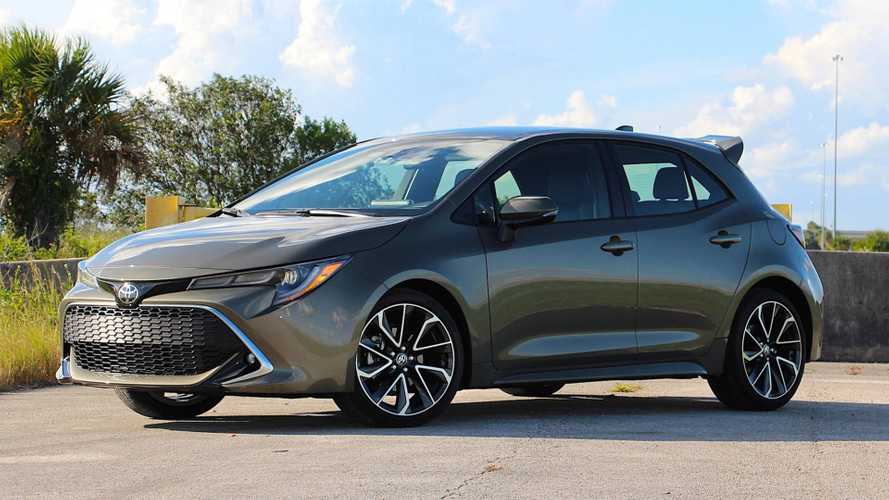 The Toyota Corolla Hatch is a Happy Meal on wheels.

Buyers in the market for something affordable and reliable swarm to the Toyota Corolla like fast-food junkies flock to McDonald's hamburgers. Like the Golden Arches’ patty, the Corolla has made a name for itself as a basic, affordable option, that will get you through the day. But sometimes that burger needs a bit more sauce – thankfully, the five-door Corolla Hatchback offers all the fixins’.

Replacing the formerly Scion-branded iM, and riding on Toyota's New Global Architecture (or, TNGA), the Corolla Hatchback is the more entertaining alternative to the fundamental four-door. And like any good burger, this one is worth the wait.

The compact segment is filled with a bunch of affordable options. The entry-level Corolla Hatchback follows the same affordability them – it starts at $21,090. Although that makes it a bit pricier than the Mazda3 ($19,345) and Civic ($20,150) hatchbacks, the base Corolla SE makes up for its added cost thanks to additional standard safety features and a standard 8.0-inch touchscreen. The real value, however, is the higher-end XSE model, tested here.

Toyota asks just $24,090 for the sporty XSE model, while Honda wants $28,750 for its comparable Civic Sport. Even with options like the continuously variable transmission ($741) and accessories like carpeted floor mats ($299), this $25,384 XSE still undercuts the Civic Sport’s price significantly.

The Toyota Corolla Hatchback stands out. The XSE model has a handful of over-the-top, boy-racer cues; the roof-mounted wing, 10-spoke wheels, gaping grille, and angular light fixtures are chief among them. But it’s still a genuinely attractive vehicle, and not too in-your-face like some others (looking at you, Civic).

The Corolla Hatchback has the best use of Toyota’s modern design language to date. The bulging bootlid and roof-mounted spoiler accentuate the edgy taillights and gloss-black diffuser. The massive honeycomb grille and knife-shaped headlights form seamlessly into a piano black nosepiece that juts out from under the hood. This car looks good from any angle.

The subtle Oxide Bronze exterior paint job is a nice finish, too. It tones down a lot of the dramatic cues that would pop more on a Corolla Hatchback painted in Blizzard Pearl (white) or Classic Silver. If you really want over-the-top, though, I suggest the Polestar-esque Blue Flame finish instead. It’s a much more eye-catching hue.

Instead of basic patterns and flat, 90-degree angles, Toyota made a concerted effort to give the Corolla’s cabin some style. The dash has a tiered design made up of black plastics and faux leather with simulated accent stitching, and the air vents come wrapped in a matte silver plastic trim. The seats are stylish and likable, as well. The test car’s chairs were finished in a funky two-tone leather and cloth coating that proved to be enjoyable throughout the course of the Corolla’s stay.

The materials in the cabin aren’t upscale, but they’re on par for the class. Most of the soft faux-leather and hard-plastic trims are inoffensive, and have a unique look to them. The only drawback is the iPad-style infotainment screen that juts up from the dash. It’s the same basic layout you’ll find on most vehicles these days.The liberal use of piano-black plastic around the screen doesn’t help soften the blow, as it quickly became covered in fingerprints.

Two screens greet you when you enter the cabin (at least in the XSE trim): a seven-inch setup is in the instrument cluster, and an eight-inch touchscreen on the dash. The former blends seamlessly with two analog instrument clusters, presenting readouts for things such as safety features, fuel economy, and music information.

The latter screen is less visually appealing, but it’s ergonomically sound. The readout is crisp, and the touchscreen is responsive and quick to react to inputs. Apple CarPlay is optional, while Android Auto, oddly enough, isn’t available at all. Toyota is probably still dealing with privacy concerns.

Even without Android Auto, the Corolla is rich with tech. Toyota’s Entune audio system comes standard. It’s easy to use and has a lot of infotainment options, even if its design and functionality feel dated. Navigation costs extra; it’s bundled into the Tech package – a $1,600 option on the XSE.

The Corolla Hatchback is the first seriously fun Corolla in recent memory. It isn’t up to snuff with hot hatchbacks like the Volkswagen GTI or Hyundai Veloster Turbo (it just isn’t quick enough to compete... yet), but the handsome hatch has some surprisingly good performance chops for a vehicle with more mainstream aspirations.

The 2.0-liter four-cylinder engine produces 168 horsepower and 151 pound-feet of torque, which puts it near the top of the class, besting both the Mazda3 and the Chevrolet Cruze. Only the Civic tops the Corolla – it produces 174 hp from a turbocharged 1.5-liter. The continuously variable transmission in this test car is one of the the best in the business. It cuts down on engine-drone significantly – thanks in part to the fixed first gear – and takes advantage of the Corolla’s torque to make the hatch feel quicker off the line.

More importantly, the Corolla Hatchback is seriously capable in corners. Body roll is minimal and the chassis remains composed. While the suspension isn’t overly stiff, it’s tuned to provide plenty of feedback. The steering is very light in the standard driving mode (a bit too light), but Sport mode firms things up and improves feedback.

The safety systems are extremely proactive. The Corolla is cool as a cucumber with cruise control on, and stays centered in the lane at all times. It can even circumvent some tougher corners on its own.

The Honda Civic gets up to 32 mpg in the city and 42 highway. The Hyundai Elantra gets 32 mpg city and 40 highway. Even the Corolla sedan gets up to 40 mpg on the highway. Efficiency is a small price to pay for the Corolla Hatchback’s additional dynamic prowess. But honestly, you won’t be able to tell much of a difference – it’s still efficient and has a 13.2-gallon tank, which is one of the largest in the segment.