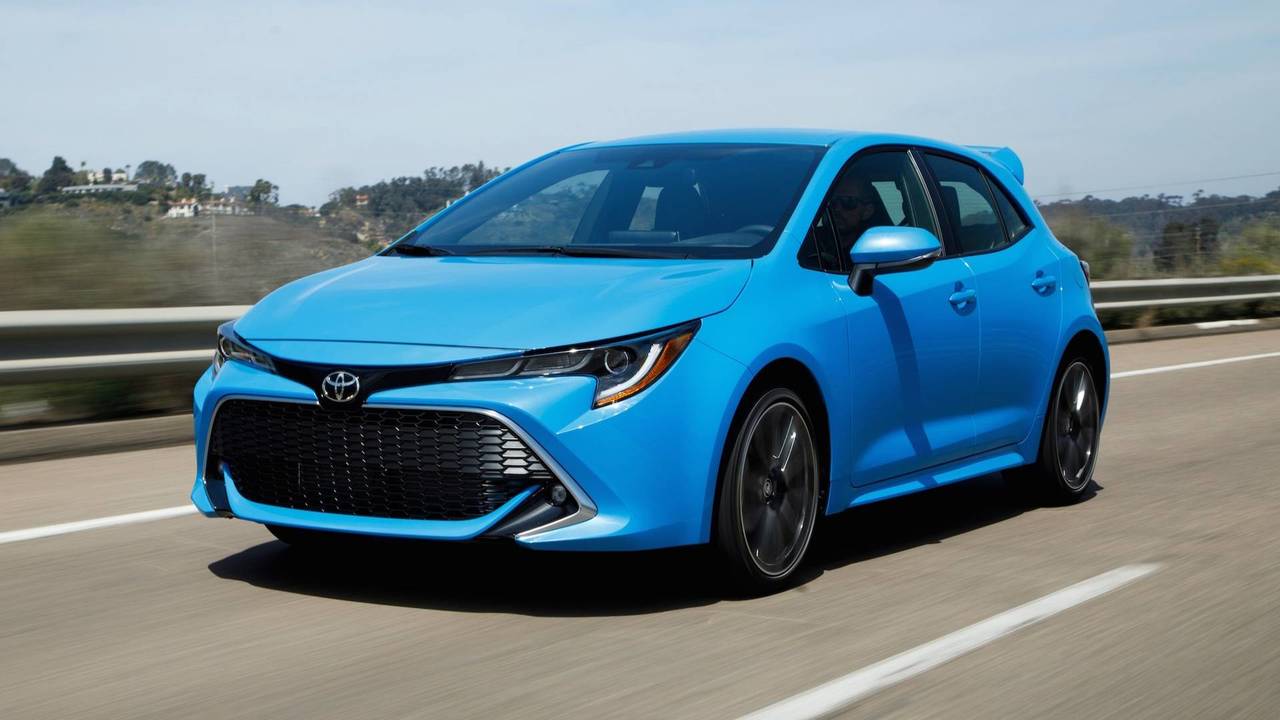 No mincing words here, the Toyota Corolla Hatchback is at the top of its class.

Say what you will about the Toyota Corolla, but the fact remains it’s the best-selling car ever built. Full stop. Fifty successful years and more than 44 million Corollas sold have solidified the small sedan’s place atop the leaderboard and ahead of such names as F-150 and Beetle – and the nameplate shows no signs of slowing. With that in mind, the new Corolla Hatchback has all the right pieces to bolster the Corolla sedan’s sales success. It looks good, it comes with all the technology buyers in this segment want, and most importantly, it’s actually fun to drive.

The car is impressively composed, giving sporty rivals like the Mazda3 and Honda Civic hatchback significant reason to be worried.

Granted, the Corolla is no hot hatchback, no matter how much marketing execs pushed the terminology. The 2.0-liter engine produces 168 horsepower and 151 pound-feet of torque, which makes it more powerful than the outgoing Corolla iM by 31 horses, but a bit less powerful than rivals like the turbocharged Honda Civic hatch (174 hp). That said, it’s still pretty quick; power is immediate off the line, and the engine is still punchy at higher speeds.

That newfound quickness is delivered by either a six-speed manual transmission with available rev-matching technology, or what Toyota calls a “Dynamic-Shift CVT.” For what it’s worth, I found the continuously variable transmission to be more enjoyable (blasphemy, I know). The unique CVT uses a fixed first gear, not unlike that of an automatic transmission, which gives the car more grunt from a standstill, is said to improve durability and efficiency in the long run, and also dramatically cuts down on engine droning compared to CVT-equipped rival cars. Toyota engineers may have mastered the CVT here.

The engine and transmission, combined with Toyota’s modern TNGA platform underneath, make the Corolla Hatchback hella fun on the twisty stuff. A lower center of gravity versus the old iM allows it be extremely agile, and improved body rigidity – by a whole 60 percent, in fact – gives it the ability to carve up corners more quickly, precisely, and with barely any body roll. An Active Cornering Assist feature dramatically reduces understeer, too, by lightly tapping the inner brakes. And even in Normal mode (Sport mode is also available), the steering is lightweight and sharp, with only some minor dead weight on center to note.

Turn on Sport mode and the Corolla actually becomes – dare I say – exciting. The throttle is more responsive, and the continuously variable transmission holds “gears” for longer and uses a more aggressive shift pattern even without use of the steering-wheel mounted shifters. Opt for the paddle shifters instead, and the CVT mimics a 10-speed automatic, lurching the car forward aggressively at every manual upshift, and revving the engine dramatically on downshifts. All told on the performance front, the car is impressively composed, giving sporty rivals like the Mazda3 and Honda Civic hatchback significant reason to be worried.

That same excitement carries over to the exterior, too. The Corolla Hatchback is easily one of the best-looking hatchbacks around – especially when wearing its bodacious Blue Flame paint job, one of three new color options. Other colors like Oxide Bronze, for example, force it to blend in a bit more, but it’s still hard to take your eyes off the handsome hatchback either way. Paparazzi (i.e. bros with cell phones) snapped up shots of the vehicle both on road and in parking lots during our drive, further lending credence to its good looks.

Up front, the gaping, trapezoidal grille is sharp, and gives the vehicle an aggressive look unlike anything we’ve ever seen on a Corolla. Standard J-shaped LED headlights and a satin chrome grille surround further enhance the overall styling of the fascia. From the back, you might not even recognize the Corolla Hatchback as a Toyota product at all; the taillights are sleek and sculpted and help sharpen the otherwise bulbous butt. The optional roof-mounted wing on the XSE trim also unleashes a bit of boy racer without being too over the top. The faux chrome exhaust tips, meanwhile, detract from the otherwise beautiful styling.

Toyota really made it a point to improve the feel of the Corolla’s cabin; the phrase “clean simplicity,” as coined by designers, actually perfectly embodies the feel of the new interior. The cockpit-style layout and the minimalistic approach work well, making the cabin a more comfortable place to be all around. The air conditioning controls are arranged cleanly below the infotainment screen, and though the steering wheel controls are a bit convoluted – volume and radio dials clash with arrows and cruise control settings – it’s still a superior setup to most modern compact cars.

Two-tone cloth and leather sport-bolstered seats can be had on the XSE model, and give the Corolla hatch an undoubtedly unique look over its competitors. A standard leather steering wheel and shift knob on both of the two trim levels are also a nice addition, even if they do feel a bit cheap to the touch.

A tablet style eight-inch touchscreen comes standard, and is another attractive addition to the already well-styled cabin. It comes equipped with the automaker’s Entune 3.0 app suite, and for the first time, Apple CarPlay and Alexa voice-command compatibility. Android Auto, though, remains absent; Toyota cites privacy concerns for excluding the tech. Qi wireless charging is another useful feature, and the optional JBL eight-speaker audio system pumps a crisp sound throughout the cabin.

Handsome styling combined with impressive driving dynamics and modern technology make the Corolla Hatchback a front runner in this segment.

Whether you opt for the base SE model or a loaded XSE, the Toyota Corolla hatchback comes standard with Toyota Safety Sense. Version 2.0 of the suite includes all of the same safety systems available in the first iteration, like lane keep assist, automatic emergency braking, and sway warning, among others – but now it’s even more advanced.

New features like low-light pedestrian detection, bicyclist detection, and an upgraded lane-keep assist system inspire even more confidence. The latter uses a new front-facing camera with a larger monitoring zone, which gives it the ability to better nudge you back to the center of your lane than previous models. That same system also works in traffic jam situations, with the technology to brake all the way down to zero when required.

For now, fuel economy and pricing options remain a mystery – but we expect the Corolla Hatchback to be fully competitive in both of these categories. For what it’s worth, the outgoing Corolla iM starts at $18,850, and competitors like the Mazda3 and Honda Civic Hatchback are both priced at $19,345 and $20,050, respectively.

But even if the Corolla Hatchback were a bit pricier than the competition, I’d argue that it’s worth the extra asking price. Handsome styling combined with impressive driving dynamics and modern technology make the Corolla Hatchback a front runner in this segment. It’s the first truly sporty Corolla the company has built in years, and has the potential to further propel the nameplate to unreachable heights on the sales spectrum. It’s that good.