The new Jetta is solid, safe choice in a crowded segment.

Six generations separate the 2019 Volkswagen Jetta from its original counterpart. Since 1979, the small sedan has been a solid second option for buyers behind the Honda Civic. But could the new version dethrone the Civic from its place atop the throne? Don't count on it. 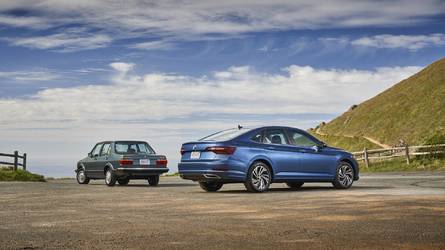 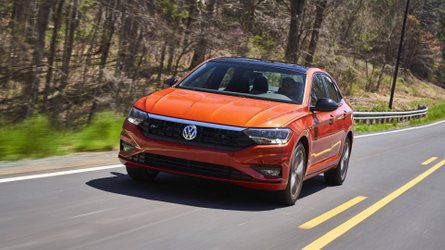 The new VW Jetta is a solid option that's even better for 2019. It's cheaper, more efficient, and tech heavy compared to the previous model. Unfortunately it suffers from being too safe in certain respects, particularly styling, and is the most underpowered vehicle in its class.

While most vehicles get more expensive with age, the new Jetta is actually cheaper than the previous model. For 2019 it starts at $18,545, whereas the outgoing version cost $18,645 to start. That makes it the most-affordable offering in the segment; the Toyota Corolla starts at $18,700, while the Honda Civic starts at $18,940. This particular tester – a loaded SEL trim – rang in at $24,415. It's the second-priciest trim below the SEL Premium but well equipped before options.

Outside of the vivid Tornado Red paint job, the Jetta has an extremely understated look. I'd go so far as to say bland, even. The look is an evolution of the outgoing model, and non-offensive. Only the large, chrome grille, slim headlights, and multi-spoke 16-inch wheels give it any sort of distinction.

The R-Line trim is a bit more aggressive looking; much of the chrome retreats for black inserts instead, and the larger 17-inch wheels add some aggression. But in its class, the Honda Civic, Mazda3, and Subaru Impreza are all better looking. Only the Toyota Corolla is less-attractive.

Once again, the Jetta suffers from being too subtle. There's a lot of black plastic and not enough unique detailing to offset the understated look. The chromed carbon-fiber trim on the lower portion of the dash and piano black plastic surrounds feel like an afterthought. The materials themselves don't feel cheap (at least not for this segment), but they could have benefitted from a bit of styling.

The good news is, there's plenty of space. A whole 41.1 inches of front legroom (0.1 inches over the outgoing model) and 37.4 inches of rear legroom (0.7 inches over the outgoing model) make the Jetta a comfortable place to sit for my six-foot frame. Leather seats – available on the R-Line and above – offer plenty of support, too. After hours on road, my butt was never sore.

Ergonomically the Jetta is also very satisfying. It has one of the best-laid-out cabins in the segment. The steering position is comfortable, the pedals are positioned perfectly, and the eight-inch central touchscreen angles towards the driver and is within easy reach.

The eight-inch central touchscreen is responsive and has crisp, clean graphics. Apple CarPlay and Android Auto come standard on all trims, and look sublime in this application.

The Jetta SEL adopts VW's new Digital Cockpit, a successful take on Audi’s excellent Virtual Cockpit. The 10.25-inch digital gauge cluster is just as lovely to look at, and appealing to use. Steering wheel-mounted controls allow you to scroll through various screens and settings without taking your eyes off the road.

The Jetta isn't rewriting the handbook with the way it drives – but it's on par for the segment. The suspension is well-damped and responsive, the lightweight steering is quick, and the available Sport Mode livens things up by improving throttle response. The Honda Civic and Mazda3 are still sportier options, though.

The turbocharged 1.4-liter engine, while not GLI-esque, is peppy and has plenty of passing power on the highway. With only 147 horsepower, the Jetta is near the bottom rung of the segment. But it makes up for it with a modest 184 pound-feet of torque. The engine is paired to a quick-shifting eight-speed automatic gearbox in this case, but buyers can still opt for a six-speed manual in lower trim levels.

On its most basic trim, the Jetta doesn't come with standard high-tech safety equipment. For $450, automatic emergency braking, blind-spot monitoring, rear cross-traffic alert, and heated mirrors can be optioned on the entry-level S trim. But on the SE and above, all that gear comes standard.

The SEL trim we tested adds all that plus full-speed adaptive cruise control, automatic high-beam LED projector headlights, and active lane control all standard. Only the 2018 Civic Touring trim comes standard with all the same features (as part of Honda Sensing). It's a $1,000 option elsewhere throughout the Honda range.

Even though the Jetta may be a smidgen cheaper with the same tech, Honda's setup is superior to VW’s. The Jetta is reactive rather than proactive, and brakes harshly in stop-and-go-traffic. Lane departure assist is barely noticeable, or flat-out didn't work in certain situations. For the price, it's a good system. But comparatively, it isn't as advanced.

The Jetta is near the top of the pack in terms of efficiency. It cracks the 40 mile-per-gallon mark with an efficiency rating of 30 mpg city, 40 highway, and 34 combined – but there are still two non-hybrid competitors that are slightly better. The Honda Civic (31/40/35) and Hyundai Elantra Eco (32/40/35) both beat it by one and two mpg respectively.