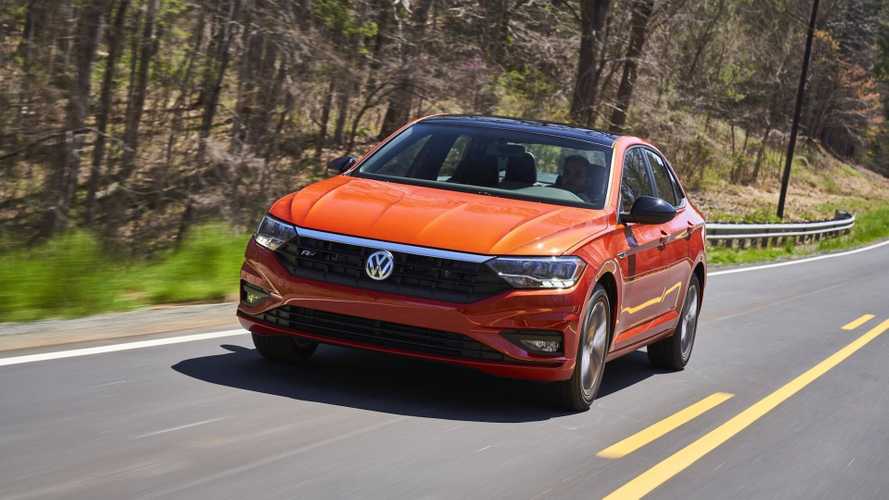 The seventh-generation Jetta is bigger and more refined than ever. Civic watch your back.

The 2019 Volkswagen Jetta, now the seventh generation of the compact sedan, is also the first to make use of VW’s modular MQB platform. Car nerds and VW fans will probably already know what that means, but for the rest of you, allow me to bottom line it: This Jetta is bigger, roomier, more feature rich, more fuel efficient, and less expensive than the last one. Pretty good, right?

Not all of that is down to the vehicle architecture of course, but the benefits of MQB, along with a smart attack plan on the current compact car landscape, could very well have this Jetta moving up the ranks of sales leaders. At the very least, if you’re in the market for a small sedan and not a small SUV – first of all, God bless you – this 2019 model demands that the VW dealership be a stop on your journey.

As always, that journey starts with the eyes. Many will look at the crisply minimal shape of the Jetta with a sigh of relief, brought on by the current era of challenging designs for mass-market cars. The Civic, for all that I dig its origami, isn’t sheet metal that everyone finds lovely. This VW sedan, meanwhile, with its strong character line, uncluttered bodyside, and sharply designed lighting elements, is handsomely conservative. There’s a bit of a big face going on here, but hardly on the level of whichever LSD-microdosing designer is now running Toyota.

I drove the middle-trim R-Line Jetta for most of the day, and I also find this version of the VW the most fetching. The dark grille and mirror caps help sport the car up a little, and the 17-inch wheels – while still looking slightly small – are my favorite design of the rolling stock on offer. The top SEL- trimmed cars get more of a polished, chrome-y look, which does a passable impression of a low-rent Audi.

On the inside, the difference in trim marks out haves and have-nots more starkly. The design of the dash, and common materials are all sharp, Germanic, and more than acceptable. Two-tone leatherette seats in the R-Design trim aren’t really my cup of tea, but less for their statement of fashion (most other testers remarked that they liked the look), and more for their flatness, and general weak will where keeping me firmly planted mid-corner was concerned.

But the technology in front of one’s face takes a massive leap forward in the SEL ($24,415) and SEL Premium ($26,945) trims. I like the analog gauges of the more basic Jetta well enough, but SEL buys you the VW version of Audi’s Virtual Cockpit: a 10.25-inch display in the gauge cluster that can be configured to show everything from a full map view to track information on your current playlist. The top tier Jetta models also get an eight-inch touchscreen in place of the base, 6.5-incher, offering a bigger, crisper interface for (among other software) your Apple CarPlay or Android Auto experience.

It’s also more cavernous inside than ever before. The overall length of the car is up 1.7 inches, and the wheelbase increased by 1.3 inches, with most of these increases dedicated to freeing up the cabin. By the tape, VW has increased front- and rear-seat space in just about every dimension; in the real world it means that it’s possible for me, at six-feet and five-inches, to "sit behind myself" … albeit rather uncomfortably. Four standard five-foot, nine-inch adults should have plenty of room.

Trunk space isn’t as generous as you’d find in Civic, Elantra, Forte, or a few others in the segment, but at 14.1 cubic feet, with standard 60/40 split folding seats, it’s still flexible enough for most day-to-day needs.

Meanwhile, the driving experience is colored with only subtle variation from trim to trim. At launch all Jettas come with a turbocharged 1.4-liter inline-four-cylinder engine under the hood, replete with a healthy 184 pound-feet of torque, and a slightly disappointing 147 horsepower. On the base Jetta S, you can opt to manage that output with a six-speed manual transmission, but most of these cars will be sold with a very smooth, don’t-call-me-DSG, eight-speed automatic.

That horsepower figure is low when compared to other turbocharged compact sedans from Honda, Nissan, and Chevy (to name a few), but the torque is at or near the top of the class. So, even with a curb weight just a little shy of 3,000 pounds, the Jetta feels quick-enough where it counts: merging, passing, and accelerating smoothly. Those looking for more thrills should wait for the upcoming Jetta GLI.

The real benefit of the 1.4T comes at the gas pump, where the MK7 Jetta gets impressive ratings of 30 miles per gallon in the city, 40 on the highway, and 34 combined (for both automatic and manual transmissions, no less). And I actually believe those numbers are possible in the real world; over the course of really hard driving through the North Carolina back country, I still saw just a few miles per gallon under that estimated combined figure. Realistically it’s just the Honda Civic, and outliers like the Ford Focus 1.0T and Hyundai Elantra Eco, that will match or beat these figures.

The Jetta’s feeling on the road is a degree more planted and solid than some other compact sedans. The car just rides well, with a well-damped suspension and excellent in-cabin noise control, even up to speeds around 80 mph. Our drive route was hardly a handling course, but the Volkswagen did offer well-weighted steering with decent feel during cornering. The Jetta doesn’t rotate quite so quickly as its Honda and Mazda counterparts, but the ride-handling balance is nevertheless superb.

On hard corner exits I was benefiting, too, from the R-Design’s one actual nod to performance, the addition of the XDS torque-vectoring differential, as seen in the GTI. Strangely, the R-Design package does not offer the same Sport mode found in the SEL / SEL Premium trims… a packaging omission that even the VW pros on hand had a hard time explaining to me. Suffice it to say the diff is great at cleaning up corner exits for this car, though most owners will opt for R-Design for the visuals rather than the handling improvement, if I had to guess.

The 2019 Jetta comes to market – basically right now – with an entry point of just $18,545 (plus $850 for destination and delivery), and aggressive pricing versus content at nearly every trim. The compact sedan segment may be bleeding sales to small SUVs, but for those buyers still looking for good value, nice dynamics, and excellent fuel economy, alternatives to King Civic are now stronger than ever.