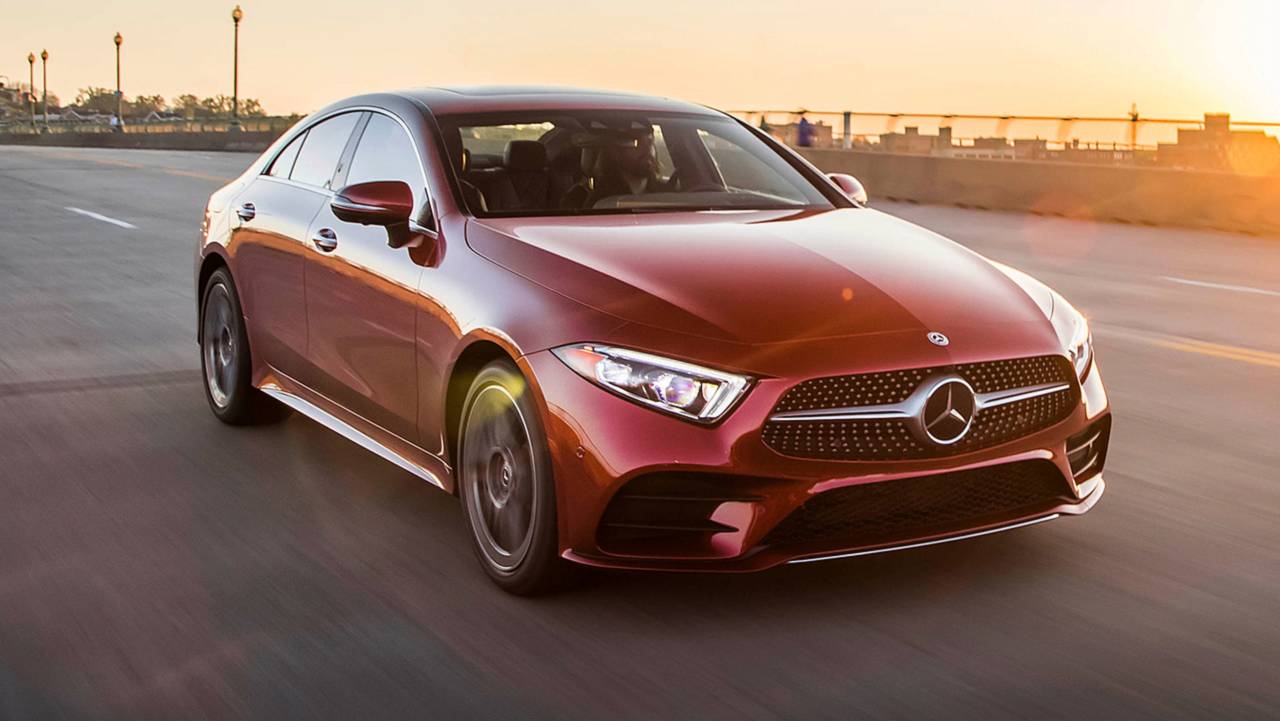 If you look up the term “four-door coupe” in a dictionary, you might come across an image of the Mercedes-Benz CLS-Class. It was the world’s first – so says Mercedes-Benz – and created a booming niche segment that now includes rivals like the Audi A7, Porsche Panamera, and the outgoing BMW 6 Series Gran Coupe.

Now in its third generation, the CLS is reinventing the wheel(s) once again. It has hybrid tech, a suite of safety technology borrowed from the S-Class, and with Mercedes-Benz’s new design language affixed, the ability to stand out in a class that is so stylistically unique.

The rest of the body isn’t nearly as angular, but it doesn’t need to be. Mercedes opted for beautiful, flowing lines instead. VP of Marketing Bernie Glaser emphasized that “the time for creases and edges are over,” and that's obvious here.

The aluminum hood and body panels are fluid, with a barely noticeable beltline crease that breaks up the otherwise flat look. Frameless windows with glass B-pillars continue the seamless theme, while narrow LED light fixtures, an integrated spoiler, and 19-inch wheels – borrowed from the AMG Line – top off the sophisticated, gorgeous styling.

While the Mercedes-Benz E-Class sedan – with which it shares its platform – opts for all-out luxury, the CLS attempts to win over performance-minded buyers instead. It has two key selling points: a sportier suspension than the E-Class, and an all-new inline six-cylinder engine. The inline-six is the first the company has offered in more than 20 years (the last Mercedes to use an inline-six was the S320). And though the architecture may be old school, this engine is far from it.

The turbocharged 3.0-liter I6 produces 362 horsepower and 369 pound-feet of torque. It’s also aided by an electric motor nudged between the engine and nine-speed transmission. Technically speaking, yes, it's a hybrid, but Mercedes prefers to use the term “EQ Boost.” The terminology may sounds silly, but it’s warranted in this case; the electric motor damn near eliminates turbo lag.

In Sport and Sport+ driving modes, the CLS450 is extremely punchy. The immediate response and firm suspension aid the rear-wheel-drive model in sprinting to 60 miles per hour in a segment-best 5.1 seconds (the 4Matic model will do the deed in 4.8 seconds). In Eco Pro and Comfort modes, the CLS changes its tune dramatically.

In Sport and Sport+ driving modes, the CLS450 is extremely punchy.

The suspension transforms from stiff to sponge-like, the throttle forgoes instantaneous responsiveness for a smoother tip-in, and there's even a “gliding” feature that shuts the gas engine off entirely on certain stretches of downhill road. This car is extremely comfortable to drive – I’d argue even more so than the E-Class – and Jekyll-and-Hyde-like in its transformative abilities.

The CLS does falter in one area, though. Its handling suffers from the same vague responsiveness as the E-Class. Tossing it into a corner yields uncommunicative results, at best. The thickness of the steering wheel might have something to do with it; it felt way too bulky in my hands.

The cabin is impressively posh, too. Most of the cluttered cues on the E-Class are gone, thankfully. The gear shift lever still sits at the back of the driver’s right hand, and the windshield controls at the left. But the cruise control settings have moved to the steering wheel, and the electronic steering wheel adjuster is located lower down. It’s a very clean, simplistic layout relative to the rest of Mercedes’ range of cars.

The CLS also ditches elements like piano black plastic in place of woodgrain trim and high-quality black leather treatments instead. The quilted seats are another high note. They’re supremely well finished, and though a little stiff, still pretty comfortable.

Riding on a version of the Mercedes MRA modular platform, which also underpins the E-Class and S-Class, the CLS stretches out an extra 2.5 inches in length over its predecessor. The wheelbase itself is 2.5-inch longer, and yields a noticeable half-inch increase in rear legroom.

Still, the backseat isn’t hugely spacious. Taller passengers might rub their heads on the roof – an affliction of every CLS since the car debuted. But the rear bench sinks in deep enough for it to be comfortable on a few-hour journey, and the addition of a middle seat transforms the CLS from a four-seater to a five-seater (in a pinch) for the first time ever.

One of the biggest selling points, though, is the optional 12.3-inch twin color display. It’s not what I would call “pretty,” but it’s extremely functional and fitting for a car as high-tech as this. With tiny touchpads on the steering wheel and a centrally mounted dial on the center console, the controls for operating it are easy to use without looking.

But the COMAND infotainment system itself is still cluttered; diving into navigation and vehicle settings will yield some confusing outputs. A home button on the center console and/or steering wheel will take you back to the home screen should you get too lost.

Apple CarPlay and Android Auto connectivity alleviate some of that frustration. Just like on the E-Class, CarPlay looks exceptional on the 12.3-inch screen, and is easy to navigate using one of the many controls offered in the CLS. Unfortunately, the new CLS doesn’t get the brand’s new MBUX infotainment system – that’s reserved for buyers of the even newer A-Class sedan.

The tech-forward thinking continues with safety. The CLS comes standard with Mercedes Intelligent Drive borrowed from the S-Class. Active brake assist, an attention warning feature, and a brake warning, which audibly alerts drivers of a collision risk, are available out of the box. Distance control, steering assist, blind spot monitoring, and lane-keep assist are optional, but they are absolutely worth it.

When the CLS isn’t unleashing all 362 of its horses, it can comfortably cruise with near autonomy and barely any human interference. It brakes all the way down to zero mph, controllably stays centered in the lane (ie no ping-ponging), can automatically change lanes for you, and has a 30-second window in which it will follow the vehicle in front of it from a dead stop. It’s a similar setup to the E-Class, but feels even more advanced in this application.

But buyers in this segment need not worry; the CLS is well worth its asking price. It’s essentially a more-aggressive E-Class with all of the same posh luxury features. It feels as at home in traffic as it does on the twisty stuff, is beautiful and aggressive, and embodies the four-door coupe ethos to a tee.