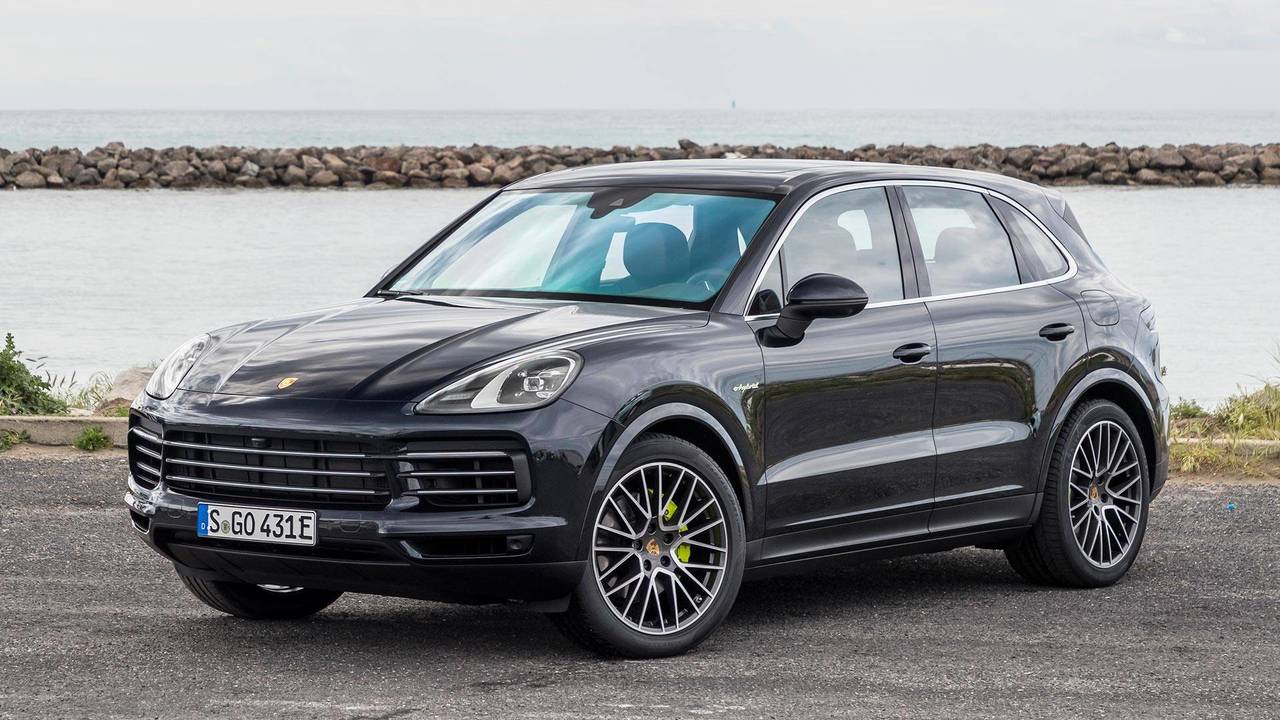 The mid-tier Porsche Cayenne is now a plug-in hybrid… and it’s damn good.

There was a time, not so very long ago, when the idea of a turbocharged gasoline-electric powertrain in a Porsche SUV would’ve seemed… exotic. Circa the 2019 model year, that formula represents one of the basic building blocks of the Porsche lineup.

In Cayenne, of course, the German automaker has its biggest volume model, and a serious profit center. And now the Cayenne E-Hybrid represents an accessible trim level of the model range, but takes that role with such sophistication and confidence that you’ll have a hard time calling it “the practical one.”

Carrying On With Cayenne:

With the ability to drive in all-electric mode farther than ever, or to use its electric drive for on demand power, the E-Hybrid can be versatile, frugal, but also exceedingly rapid. This ain’t no Prius.

The advanced drivetrain starts with a turbocharged 3.0-liter V6 gas engine, producing 335 horsepower and 332 pound-feet of torque, all on its own. That mill is paired with a centrally mounted electric motor that itself churns out 134 hp and 295 lb-ft, with maximum ratings for the full system output pegged at 455 hp and 516 lb-ft. The marriage of electrons and oil allow the SUV to pass 60 miles per hour in just 4.7 seconds, with a top speed of 157 mph.

Battery capacity and performance has improved versus the outgoing Cayenne hybrid, as you’d expect. The 2019 version uses eight battery modules made from 13 cells apiece, with a total capacity of 14.1 kilowatt-hours and is rated at 382 volts. There’s a 3.6-kilowatt charger, or an optional 7.2-kW unit, with the former delivering a full charge in 4 hours at 32 amps, and the latter speeding that up to just 2.33 hours (charging with either on 10 amps takes 7.75 hours).

The headline stat from that bigger battery is an electric-only range of 27 miles (44 kilometers), when measured on the European cycle. Improved fuel economy is also expected, though we’re going to have to wait a bit in the U.S. for official EPA numbers (the Cayenne E-Hybrid won’t be on sale in the U.S. until next year).

The headline stat from that bigger battery is an electric-only range of 27 miles.

That sounds like a lot of complexity under the skin, but the net net is a hard-charging (no pun intended) big Porsche, with exceptional driving dynamics relative to its size and class.

My drive route trailed the Mediterranean coast, starting from the French city of Montpellier. It transitioned between narrow roads and slow-moving diesel hatchbacks (or occasional tractors), offering ample opportunity to feel the full boost from the turbo and electric motor.

Even when starting off in electric-only mode, the system understood from the throttle’s position when I was asking for all of the available thrust from engine and motor. I loved the sound of the exhaust from the V6 when I spurred it into quick action – and, of course, the sheer force of the forward acceleration when doing so – but was equally impressed by the imperceptible shift between driving modes. There’s no lurch, no hiccup when asking for the E-Hybrid to start drinking gasoline, and better, no protest at all from the eight-speed automatic transmission. Just quick downshifts, and the seamless flow of power to all four wheels.

If you were concerned about the bread-and-butter Cayenne also being somewhat polarizing because of its advanced powertrain, don’t be. You can drive this model anyway that pleases you, from hypermiling for EV range to maximum attack, and feel satisfied in all cases. And there are driving modes to suit each, from E-Power (all electric), to Hybrid Auto (max efficiency), to the self-explanatory Sport and Sport Plus. Porsche’s newest, most hilarious party trick is on offer here, too: the Sport Response button that gives you a 20-second window with all variable vehicle settings switched automatically to “pass-that-guy mode.” I love it.

The battery-laden Cayenne does carry a few more pounds than its ICE-only counterparts. The curb weight of 5,060 pounds is nearly 700-lbs heavier than the base Cayenne, or about 600 more than the similarly priced and powered Cayenne S. But handling, at least on curvy roads, doesn’t seem to suffer much. The E-Hybrid is really planted and happy on long sweepers, with agility enough to tackle aggressively twisted roads with grace, too. Both of the test vehicles I drove were equipped with the optional active air suspension, which did a phenomenal job of staying stiff in a hard corner, without punishing the driver when cruising on the highway.

The electromechanical power steering with a 12.2:1 ratio (with the optional rear-axle steering) is more than fast enough to respond rapidly to inputs, but it’s still not my favorite Porsche tiller. Yes, it’s fitting that the SUV get slightly duller, more filtered steering than a Cayman, but I was left wanting just an iota more communication from the wheel.

Another complaint must be lodged against Porsche’s invocation of its lane-keep assist tech here, which felt more aggressive in correcting the steering wheel than I’d like, and was accompanied by a noise straight out of a 1980s arcade console (like a laser beam ripping through an enemy starfighter… but less cool and more annoying).

And, while I really love the look of the 12.3-inch, glossy infotainment screen (and its readiness for Apple CarPlay, if not Android Auto), and the use of the navigation system, finding the menu to turn off the bothersome advanced safety systems was a small chore. Of course, that’s a comment about the great feature-richness of the Porsche Advanced Cockpit system as much as it is a complaint.

Porsche was crowing about other new Cayenne luxury features, like a full-color head-up display and massaging seats, but, sadly, neither were available on any of my test vehicles. (We’ll be sure to give the shiatsu chairs a full review when we get a loaded car through the Motor1.com office, never fear.)

Generally speaking, however, this Cayenne has a lot more appeal to someone shopping for a quick luxury SUV than it might to “traditional” Porsche enthusiasts. The quiet cabin is plush without being overly designed. There’s great leather and quality touchpoints accenting a cabin that feels tech-y, but also less button-heavy, than the last-gen version of the vehicle. This is a modern, roomy space, with a big boot and just about every optional amenity imaginable. Well suited, in other words, for the needs of buyers in this $80,000 to six-figure price category.

Oh, and while its hybrid nature is mostly hidden within the same great, taught SUV lines of every other new Cayenne, it does have those rad acid-green brakes. Even your Tesla Model X-owning neighbors will eventually cotton on to the fact that you’re driving a battery-electric and a Porsche.

With a plug-in powertrain, a sub-five-second sprint, and a price tag around eighty grand, this Cayenne doesn’t actually have much in the way of natural competitors. The Tesla Model X 75D is close in terms of price ($79,500) and performance, but obviously is all-electric and with far greater zero-emissions range than the Porsche. Mercedes-Benz does a GLE 550e that comes close on the specs, albeit a little bit slower to accelerate, and with a nearly $13,000 price advantage. And, while BMW makes an electrified X5 xDrive40e, that car’s 2.0-liter engine and $63,750 starting price put it into a different class. Perhaps most importantly, none of those new-fangled utility vehicles come with a Porsche crest on the hood – an item which carries a cachet that is still hard to replicate.

It used to be the middle of a model range was reserved for popular, but pretty average, versions of vehicles. With the wildly advanced, capable, and flexible Cayenne E-Hybrid, Porsche is proving that notion is about as old fashioned as the simple internal combustion engine.