Far from as modern or refined as its rivals, the GX delivers an old-school take on the luxury SUV.

The last significant update to the Lexus GX 460 came for the 2014 model year, when the big luxury SUV adopted the new Lexus spindle-grille face and some other changes – and this vehicle feels like it came straight out of a 2014 timewarp. While SUVs are more popular than ever, the GX recalls the olden days of big, heavy, SUVs with body-on-frame construction and thirsty V8 engines. That’s not necessarily all bad: With a locking center differential, aggressive approach and departure angles, and hill-descent control, the GX does offer a bit more off-roading ability than some of its direct luxury competitors. It is, however, inefficient and lacking in many modern technologies. 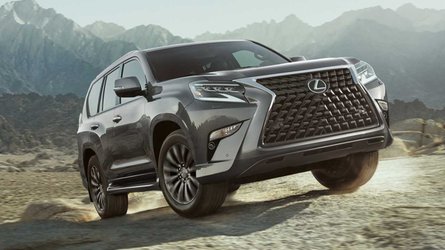 With a base price of $51,855 that’s reasonably low for three-row luxury vehicles, the GX initially scores highly here – the entry-level 2018 Infiniti QX80, for instance, has a starting price almost $14,000 higher. And this model’s as-tested price adds only $2,525 to that figure, which also is impressive. But that’s partly because this SUV doesn’t really have all that many extra features; if you were to load up the GX 460 with features and options, well, that as-tested price could balloon easily. The top trim, the GX 460 Luxury, starts at $63,530 before any options.

Well, it looks like a big, utilitarian SUV, with a boxy shape and an enormous rendition of the Lexus corporate face up front. Though far from offensive, the design of the Lexus GX 460 also is not particularly pretty or memorable; in fact, it’s a pretty dated look for big SUVs at this point. That said, the running boards, big wheels with high-sidewall (265/60R18) tires, and generous approach/departure angles all lend it an air of ruggedness.

In the first two rows of seats, you’ll find ample space for passengers of all sizes; expect lots of leg-, head-, and shoulder room. The third row is tiny; the seat cushions are small and slammed to the floor, and there isn’t much legroom at all. Elect the larger Lexus LX if you regularly need to carry more than five people.

If you keep all three rows of seats raised, cargo space is almost non-existent; think of that third row as emergency-only seating. But with it down, there’s a capacious cargo hold that, aside from a relatively high liftover height, will make transporting your belonging easy.

The sideways-swinging rear door is a cool touch, too, though unfortunately it swings the wrong way for left-hand-drive vehicles; the open door would block access from the sidewalk when parallel parked. And I always have a soft spot for SUVs that let you pop open the rear glass independently of the door itself, which can come in handy for tossing or retrieving small items without opening the entire rear door.

The GX also shows its age when it comes to connectivity. The standard 8.0-inch touchscreen has so-so graphics and only modest functionality: Bluetooth calling and music streaming, satellite radio, and an optional navigation system. Although it works with the Siri Eyes Free function for Apple iPhones, neither Apple CarPlay nor Android Auto is available. There are just two USB ports – hardly enough for an entire family to charge up their gadgets on a road trip.

The multifunction trip computer offers only a few pieces of information, and has a dated low-res monochrome display. And this base model lacks a lot of features that we’ve come to expect from luxury machines: heated/cooled front seats are a $640 option, for instance, and a backup camera is the only piece of safety tech (see below for more on that). You end up having to spend up to the $56,300 Premium or $63,530 Luxury trim levels to get the sort of features we expect from a luxury SUV.

The 4.6-liter V8 engine cranks out plenty of power and torque, and unladen, the big GX will hit 60 miles per hour in a respectable 7.8 seconds. Though the automatic transmission has only six speeds, hurting efficiency and acceleration compared to rivals with 7-10-speed autos, it does at least promptly offer up downshifts when you want to accelerate.

On-road manners skew toward comfort, with a plush, soft ride and lazy, easy steering. Driving it is relaxed and straightforward, but never hurried. The GX comes standard with a hydraulic-actuated anti-roll system, which keeps the big SUV remarkable stable and planted through whatever maneuvers you throw at it. In addition, it comes standard with hill-descent control and a low-range in the transfer case, as well as 8.1 inches of ground clearance, so mild off-roading won’t be a challenge.

The GX scores poorly in this category because it offers few advanced active safety features, and most of the ones that are available are pricey paid options. This entry-trim GX 460 doesn’t have any active safety technology at all, besides a soon-to-be-mandatory backup camera. Blind-spot monitoring with rear cross-traffic alert is an $800 option (or standard on the $63,530 Luxury trim level), while parking sensors are a $500 option. That Luxury trim does offer a Driver Support package, for $4,340; it features automatic high beams, lane-departure warning, front- and side-view cameras, pre-collision warning, and adaptive cruise control.

As our rating figures encompass all SUVs, even the thriftiest new crossovers, the Lexus’s figures are on the low end. Rated for 15 miles per gallon in the city and 18 mpg on the highway, the GX’s efficiency is not very impressive among three-row SUVs – though in fairness, the four-wheel-drive Infiniti QX80 is rated for 13/19 mpg. Still, I struggled to beat 14.5 mpg indicated in my test of this Lexus, which doesn’t bode well for hitting the 16-mpg combined figure. Premium fuel is required, too, adding to your cost at the pump.