With a better-looking face, more space, new powertrains, and as much off-roading ability as ever, Cherokee is ready for its second act.

Has a popular vehicle needed a facelift more than the Jeep Cherokee since its needle-nosed debut for the 2014 model year? While Jeep’s middle child SUV – slotting below the Grand Cherokee and above the new Compass – was clever enough to sell nearly 170,000 units just last year, it always struck me as just slightly, well, weird looking.

Apparently I wasn’t the only one. Among the host of improvements and upgrades that Jeep has wrought for the 2019 Cherokee, the most obvious is the nose on its face… as it were. The pointed snout has been replaced with a higher, blunter front end, which generally looks like a smaller version of the Grand Cherokee. That includes new LED headlights – in fact, all lighting has gone LED, and on every trim level – that are less squinty than those they replace.

Read about the 2019 Jeep Cherokee's debut:

Losing the decisive front end of the car makes the whole shape entirely conventional. And while I’m typically a vocal proponent of automotive design that eschews the traditional, this is one battle I’m happy convention has won.

Beyond the dramatically better face, you’ll be hard pressed to see how the ’19 Cherokee differs from its predecessor. Five new wheel designs will help, including a fetching dark-finished wheel for the Trailhawk, and the model’s first ever set of 19-inchers.

The cabin has also been updated for the refreshed Jeep, with the star of the show being a center stack that perfectly frames the available 8.4-inch UConnect infotainment screen. This is the fourth-generation for UConnect software, and it remains one of the best in the business. Multitouch gestures are supported – pinch to zoom, tapping and swiping, and the like – and the response time and total feature set are excellent. If you want navigation you will have to opt for the 8.4-incher, as well. 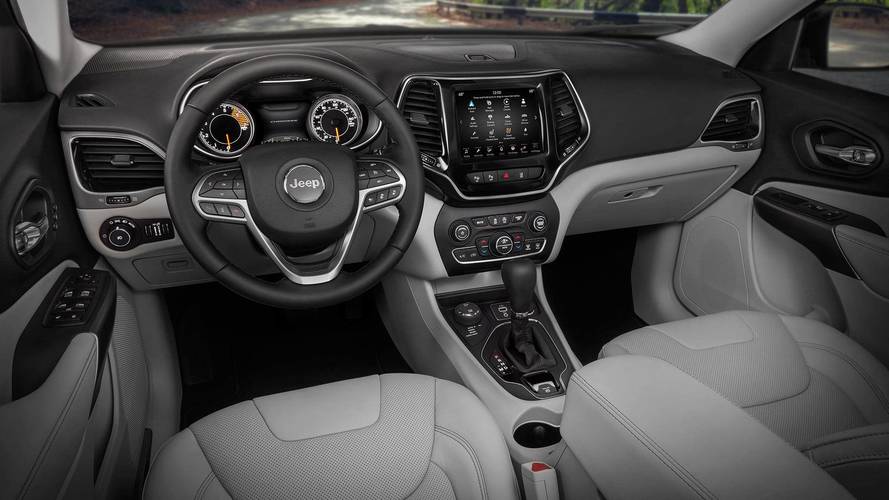 The standard touchscreen is seven inches, and is fine in terms of usability, but doesn’t look nearly so impressive. The smaller screen ends up thickly framed in black plastic, making it instantly obvious that there’s a better version you didn’t buy. Still, Apple CarPlay and Android Auto are supported by both systems, which is huge.

The rest of the interior is quite nice and more refined than you’d expect if you haven’t been in a Jeep product lately. Yes, there are still some rugged, rather workman-like plastics to be found all over (all of which look a tiny bit cheaper in the all-black interior than they do in the dark brown contrasting colorway). But solid feeling switchgear, cushy and supportive seating, and a really nice, thick-rimmed steering wheel all help to class up the joint. 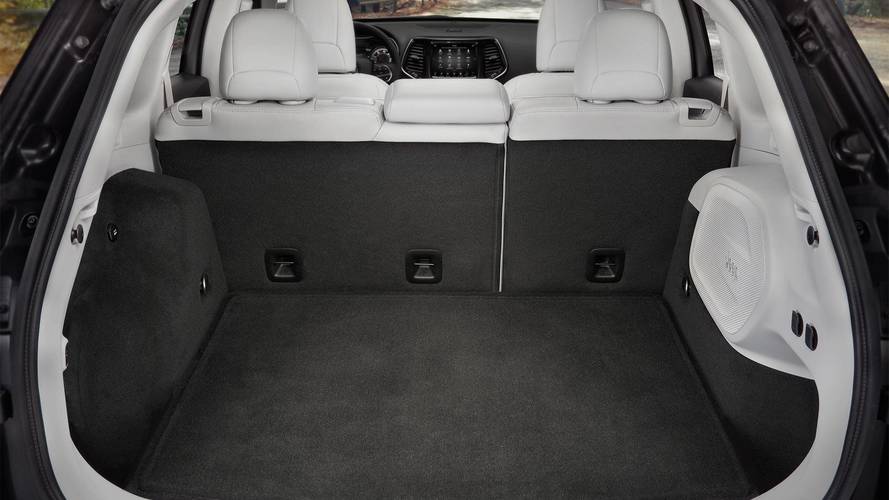 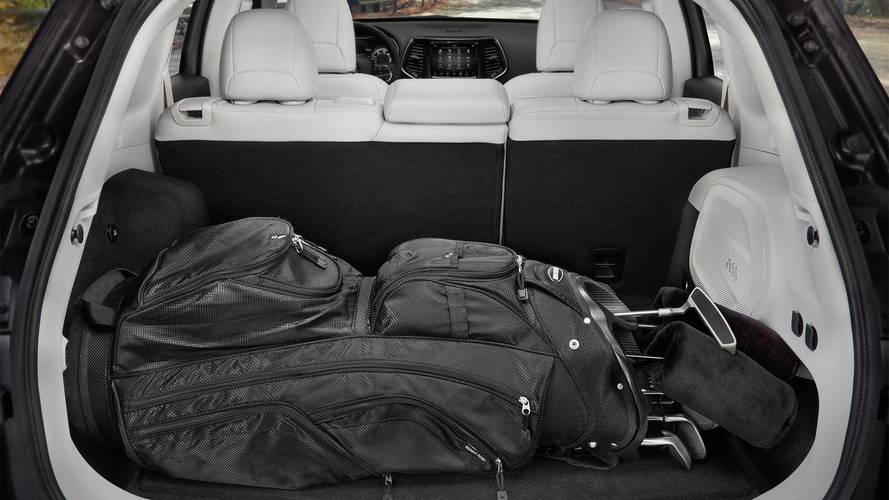 Jeep has engineered in a little bit more room in the cabin, in addition to redecorating it. Notably the rear cargo area has been slightly widened – I was told you can now lay a set of golf clubs sideways, but I didn’t have my bag along to check – and the space behind the rear seats increased to 27 cubic feet. Though, you won’t buy a Cherokee for roominess alone, as its maximum storage behind the front seats of 54.9 cu ft is well shy of cars like the Toyota RAV4 or Nissan Rogue, both of which offer 70 cubes or more.

Perhaps the most impactful changes Jeep offers, however, have to be felt rather than seen. For starters, there’s the addition of the company’s new turbocharged 2.0-liter four-cylinder to the powertrain mix. Rated at 270 horsepower and 295 pound-feet of torque, the engine has a really satisfying low-range punch, and seems to be very well mated to the nine-speed automatic transmission. The company claims a 0-60 time of 7.0 seconds for the 2.0T Cherokee, which isn’t going to break any records, but it’s more than enough that I was confidently dicing with LA-bound traffic.

The 2.0T is an optional upgrade on all but the most-basic Latitude trim (it costs about $500), and should also improve fuel economy versus the 3.2-liter Pentastar V6. EPA ratings have yet to be calculated, however. 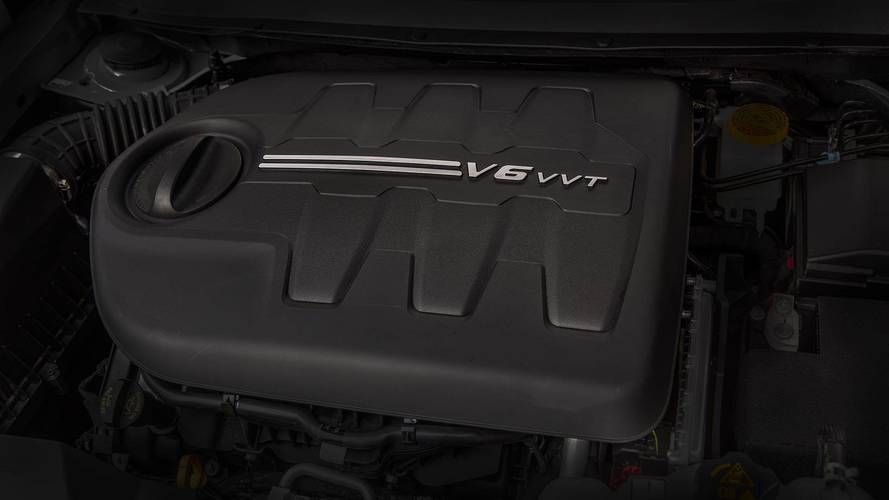 About that V6… It’s still pretty good, even in the face of its more modern, smaller displacement lineup mate. The six offers 271 hp and 239 lb-ft, and I would argue sounds more stirring than the turbo motor when you really stick your foot in it. What’s more, with the optional towing package, the V6 has a higher tow rating than the 2.0T (4,500 pounds vs. 4,000 pounds), which will certainly be a consideration for some buyers.

Meanwhile, the naturally aspirated 2.4-liter Tigershark I4 is still the base engine for the Latitude through the Limited 4X2 trims. Jeep minders told me that the 180-hp, 170-lb-ft engine gets stop/start tech for the first time in 2019, but they didn’t bring one out to California for us to sample.

You don’t normally equate small SUVs with canyon carving, but that’s what was offered up on the road-drive portion of the test, and on some of my favorite roads through the coastal mountains. The work that has been done to make Cherokee feel pretty darn competent on these aggressive roads shouldn’t be overlooked.

The recalibrated steering didn’t wow me in terms of road feel, but the tuning of the electric power assist in terms of weight is really nice. Neither too light nor too heavy, using the wheel to throw the SUV from corner to corner, in switchbacks no less, was quite satisfying. The dampers, bushings, and sway bars have all been adjusted, too, and the result is a competent-handling vehicle that resorted to safely understeering only after I pushed it really hard. 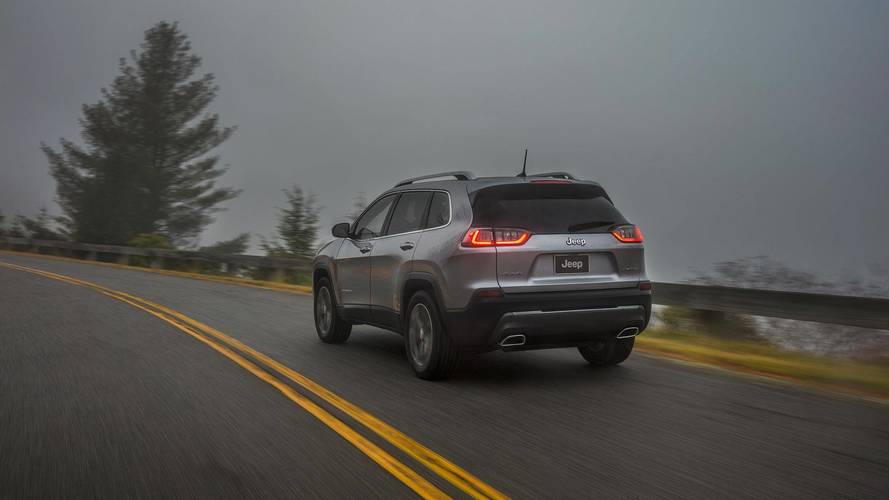 I only had a brief stint on the highway, but it was enough to report that ride quality on the freeway is very nice as well. Noise in the cabin from tires and wind is well suppressed, too, though the CR-V and Rogue both do that better.

Anyone shopping at the Jeep dealership likely expects the Cherokee to do at least one thing far, far better than mainstream small SUVs, though – get in and out of dirty places with ease. Off-roading is the brand’s competitive advantage, and it’s not one that seems to be lost on the mass-market Cherokee.

Now, it’s fair to mention that you can buy a front-drive Cherokee in every trim level but Trailhawk, but I’m told that something like 65 percent of buyers opt to spend the extra $1,500 for the 4X4 versions. It’s a Jeep, after all. 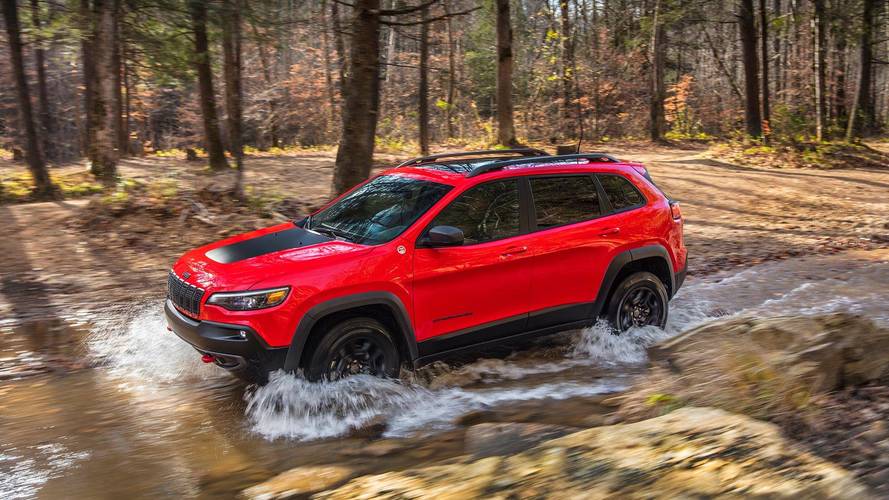 That Trail Rated Trailhawk, complete with the Active Drive Lock four-wheel-drive system that offers a rear locking differential and a low range, is brutally capable off road. Jeep set up a really serious off-road session for this test, including climbing up and over big boulders, driving sideways through ditches, and mounting steep grades of loose sand and gravel. With some impressive ORV stats – 29.9 degrees of approach angle, 32.2 degrees of departure angle, a breakover angle of 22.9 degrees, a maximum 51.2:1 crawl ratio, and 8.7 inches of ground clearance – my Trailhawk chugged through it all. 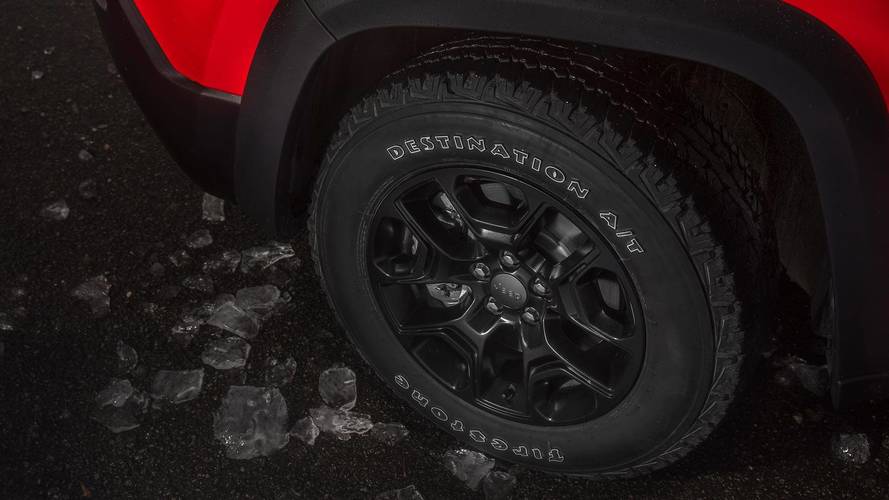 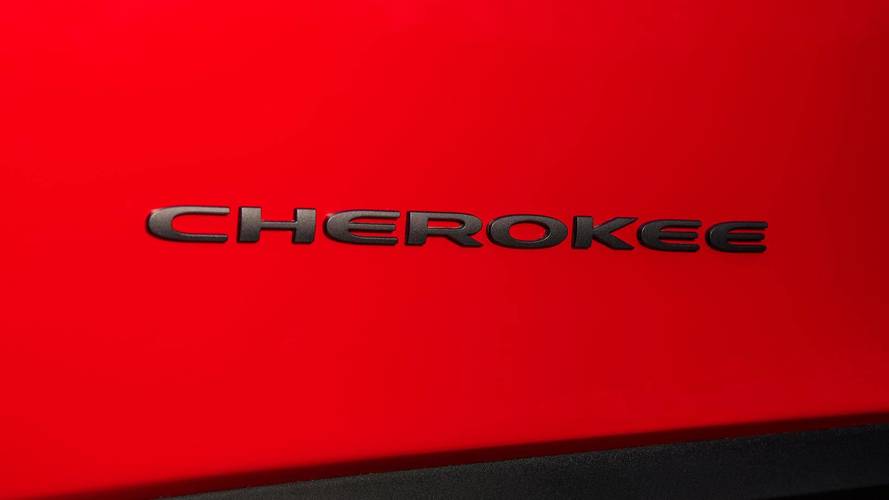 Mainstream buyers will likely be fine with the lesser Jeep Active Drive II (with the two-speed power transfer unit and low range, but no locking diff), along with the Selec-Terrain traction control system with settings for Auto, Snow, Sport, Sand/Mud, and Rock. Certainly folks in wintery or mountainous regions of the country will enjoy the added reassurance of sure grip.

Getting more of those mainstreamers is just what Jeep is after, too, as its very competitive value proposition would seem to indicate. For instance, at the very bottom of the range – a 4X2 Latitude – the company has actually reduced the MSRP by four hundred bucks, to $23,995. Now, that’s not the Cherokee I would buy, as I think the lack of 4X4 goodies somewhat blunts the vehicle’s reason for being, but the price walk upwards should keep Cherokee in a lot of consideration sets. 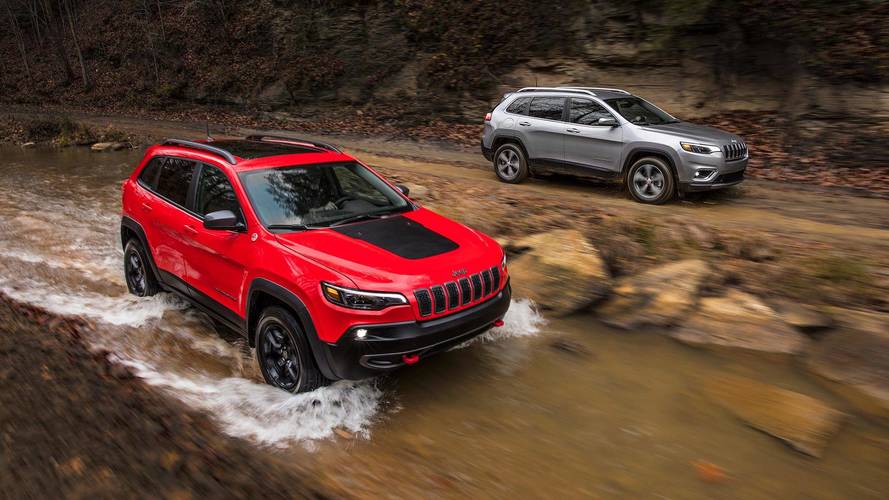 To me, the Trailhawk is, though slightly expensive, the version to seek out. Not only is it the most differentiated from the small SUV pack – you’re not going to take a RAV4 for a lighthearted weekend in Moab – but it gets bigger wheels, better tires, and at least the option of the cooler infotainment screen. And all for a little bit less than top-spec levels of competitors from Chevy, Nissan, and Honda.

On the other hand, I’m not sold on the new turbo engine as worth the asking price. In terms of both smoothness and speed, that Pentastar V6 still feels right for this vehicle – the old girl isn’t played out yet. What’s more, it’s one of the few V6 offerings left in this segment.

Even with a handsome new face, the Jeep Cherokee is, after all, somewhat of a niche proposition in a massive sales category. But I don’t see that as a negative. Whether you need Trail Rated toughness or not, Jeep offers a dirt-under-the-nails appeal where the top-selling Japanese brands are mostly on-roaders that do OK in the snow. And the Cherokee, like the Jeep brand, also has a kind of ineffable coolness as a result.

Coolness, toughness, and no more weird nose? Consider me onboard for the second act of the modern Cherokee.