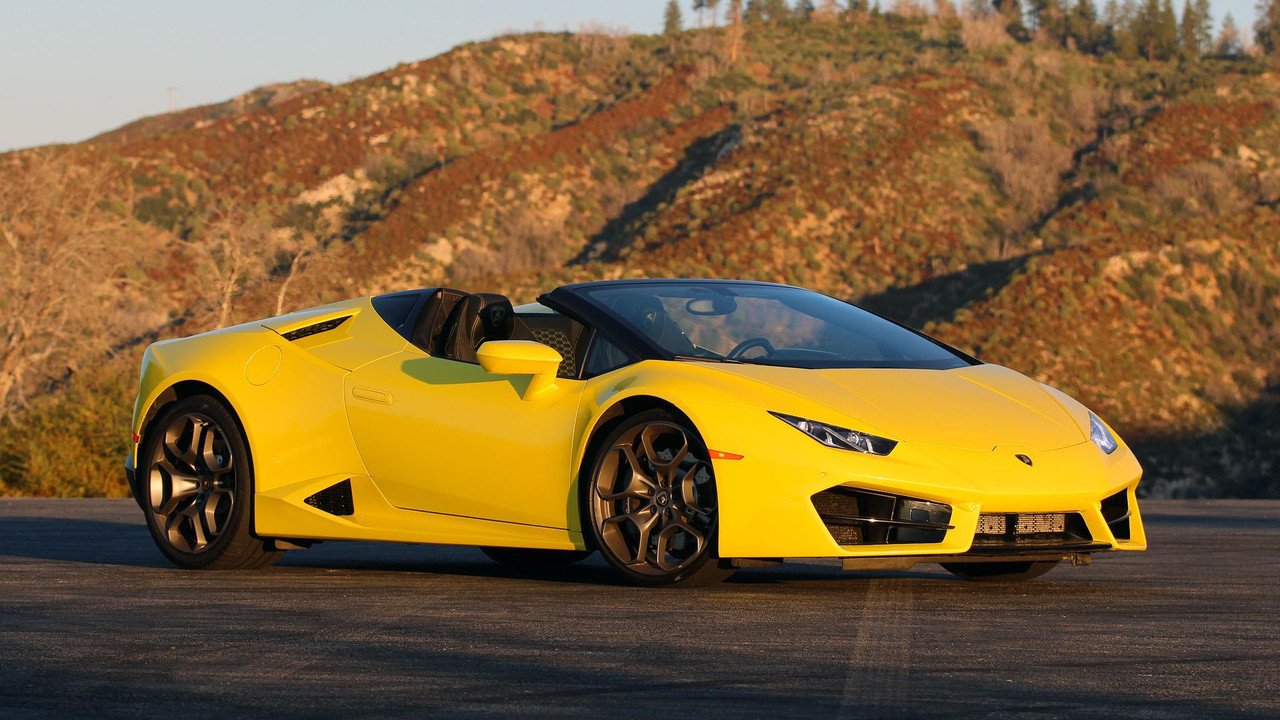 Docile on the streets and a demon in the sheets, the topless, two-wheel-drive Huracán is a supercar I can’t get enough of.

As far as I’m concerned, the rear-wheel-drive, 571-horsepower LP 580-2 is the best version of the Lamborghini Huracán. Its naturally aspirated 5.2-liter V10 may be down 31 hp compared to the all-wheel-drive 610-4, but the rear-drive car is lighter, with better balance, and it’s about $40,000 cheaper. The LP 580-2 Spyder you see here is essentially the same formula sans roof, and letting in the sunshine enhances the totally visceral Huracán driving experience.

So after several days of living with a “holy sh*t, that’s yellow” LP 580-2 Spyder in Los Angeles, I’m convinced that this is the version to get. On a great canyon road, it’s absolutely brilliant – no surprise there. But almost equally impressive are the Huracán’s around-town manners. For as capable as this thing is during a spirited run, it’s a perfect gentleman when I’m just going up to CVS to get some sundries.

Drives like... a car. I know – this seems a little, um, obvious. But listen, if you’ve ever tried to drive a Nissan GT-R in stop-and-go traffic, constantly fighting the immediacy of the turbocharged power delivery, you’ll understand what I’m talking about. The Huracán handles city commuting with aplomb. It’s not an always-on beast that you have to tame between stoplights. In the default Strada drive mode, it’s comfortable and compliant over bumps. Forward visibility is great. The throttle has progressive response, and the engine doesn’t assault you with power right off the line. Even the steering is relatively light, though still direct, and a joy to use around town. Oh, and the front-end hydraulic lift is super helpful for steep driveways and speedbumps. I won’t dare put this into daily driver territory, but just running errands around Los Angeles, it’s easy to drive as a Camry. Just cooler. Way cooler.

One of the best driver’s cars on the road today. Get out of the city and onto a winding road, and man oh man, this thing comes to life. I can’t remember the last time I drove a car this willing, this capable, and this communicative. Switch the drive mode to Sport, and everything gets sharper. The steering is a textbook example of great weight and greater feedback. The chassis is superb and lets the Huracán cut through corners like an exacto knife. Standard steel brakes remain confident even after hours of use, though I’d still probably opt for the ceramic units for more initial bite in the brake pedal. And that sound. Oh god, that sound. When electric motors and turbos finally take over the world, I am really going to miss the sweet, sweet wail of a naturally aspirated V10 that winds out to a 8,500 rpm climax. And it’s fast. So fast. Driving this car on a beautiful day along a ribbon of pavement is the absolute definition of bliss.

Looks like a goddamn supercar. Every one of the competitors I list below are gorgeous cars, but I’ll argue the Huracán is the coolest of the lot – a truly superlative supercar. No kid is putting a poster of a 911 Turbo on their bedroom wall – it’s this angular, aggressive, sex-on-wheels Huracán, especially in this shut-up-and-pay-attention-to-me shade of Giallo Tenerife (which costs $11,900, by the way).

Coolness carries over to the interior. I never get tired of having to lift the red cover over the engine start button; all the toggles feel like they’re straight out of a fighter jet. The fonts and colors and display in the fully digital instrument cluster are as angular as the Lambo’s exterior design. Hell, even those $5,600 carbon composite housings for the air vents and door handles look totally rad. The Huracán brings all the emotion of the exterior design into the cabin, and doesn’t come at the expense of luxury and livability. Quite the opposite, actually – this is a wonderfully appointed interior, with comfortable, supportive seats, and great materials everywhere you might put your hands. Well, except for the slide-out cupholder in the dash – that thing’s just stupid.

Trust me, you want the Spyder. This RWD Huracán Spyder is 265 pounds heavier than its hardtop sibling, but driving this car with the roof down takes the experience to new levels. Plus, it doesn’t hurt the Huracán’s design – all of the bold character lines remain intact. Honestly, to my eyes, this thing looks better as a roadster. (I look forward to arguing with all of you about this in the comments.)

Needs a tech update. The 12.3-inch Lamborghini Infotainment System display was next-level technology at one time. But then sister company Audi got ahold of it, gave it better graphics with more vibrant colors, renamed it Virtual Cockpit, and started integrating it into every single one of the brand’s cars. It’s kind of silly that a $40,000 subcompact A3 has a better version of the same system you get in a $220,000 Lambo (or, in the case of this crazily optioned test car, $280,000). On top of that, the Huracán uses the old Audi MMI interface, with last-gen graphics, last-gen fonts, and last-gen buttons on the center stack. C’mon, guys.

What’s behind me, again? As I mentioned earlier, forward visibility from inside the Huracán is excellent. But every other sight line – side, blind spot, or rear – is total crap. Even with the mirrors adjusted properly, it’s hard to tell exactly where neighboring cars are located, or exactly how close you are to an object behind you. Never in my life have I relied on a rear-view camera so much.