Rewarding to drive and with striking curb appeal, the Stelvio lobs a curveball at the luxury-crossover segment.

With each new product introduction, Alfa Romeo is broadening its appeal to U.S. car buyers. The 4C mid-engine sports car may have been stupendously good to drive, but it was a niche toy. The Giulia sports sedan expanded Alfa Romeo ownership to a larger audience, even if it hasn’t exactly been a runaway sales success. And now the Stelvio, the brand’s first-ever SUV, arrives to jump into the premium crossover class. With SUVs of all types gaining steam over sedans, it’s the perfect next step for Alfa’s global relaunch.

“The Stelvio is absolutely the right vehicle at the right time,” agrees Reid Bigland, global head of Alfa Romeo. 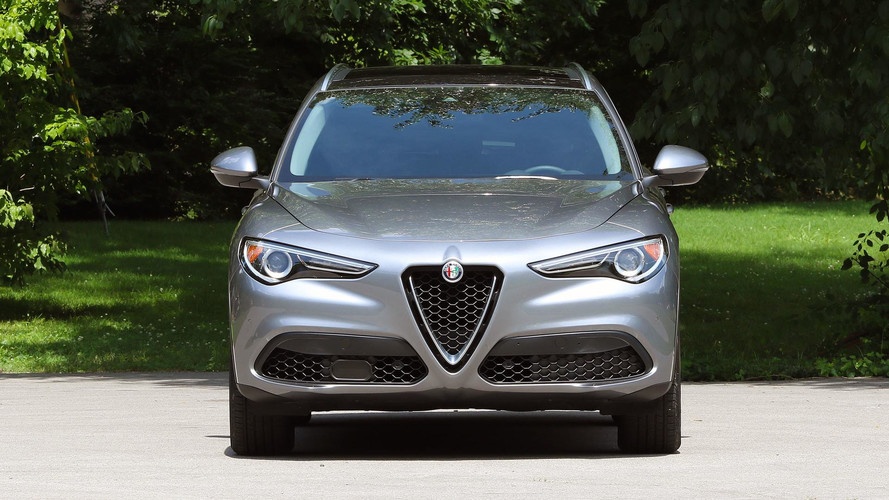 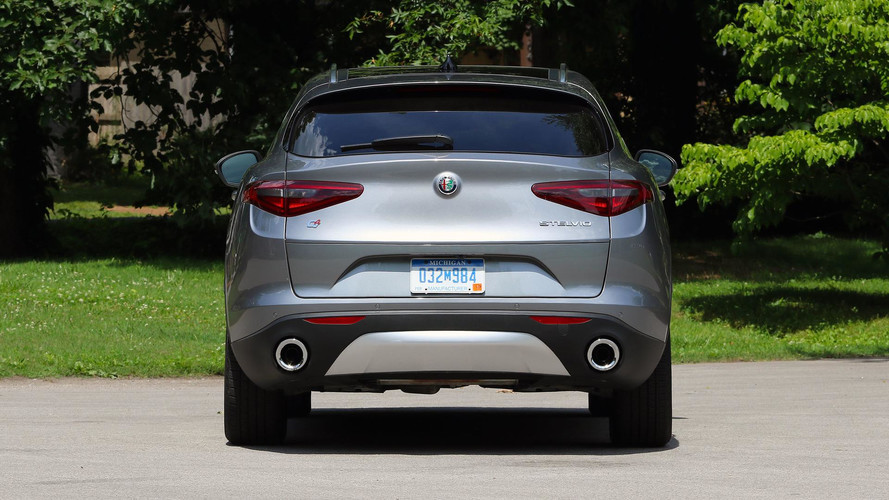 Just because it’s more practical, though, don’t think the Stelvio is any less enthralling to drive than the Giulia sedan.

Just because it’s more practical, though, don’t think the Stelvio is any less enthralling to drive than the Giulia sedan. The two cars share their Giorgio platform of aluminum and high-strength steel, their double-wishbone front and multilink rear suspensions, and even a standard carbon-fiber driveshaft. That’s a commitment to performance you won’t find in most competitive SUVs.

Compared to the Giulia, the Stelvio is 2.0 inches longer and 8.9 inches taller, with 2.5 inches more ground clearance (for a total of just 8.1 inches). It looks remarkably like the sedan, with purposeful creases and curves all over the bodywork. Instantly distinctive in your rear-view mirror, the Stelvio’s striking LED running lights (more than a little reminiscent of McLaren) and “Trilobo” grille design (upside-down triangle with two big air intakes in the lower fascia) make a brilliant first impression on passersby. The liftgate is a little plain, but the dual rear exhausts make a big statement – even if the smaller, real outlets are visible inside the big chrome finishers.

Under that low hood is the same 2.0-liter turbocharged inline four-cylinder engine as the Giulia, with 280 horsepower and 306 pound-feet of torque making it the class leader, at least among other luxury crossovers’ base engines. Claimed performance figures of 5.4 seconds to 60 miles per hour and a 144-mph top speed are also segment bests against other 2.0-liter-powered SUVs. An eight-speed automatic and all-wheel drive are both standard; the latter can send 100 percent of engine torque to the rear wheels for efficiency. 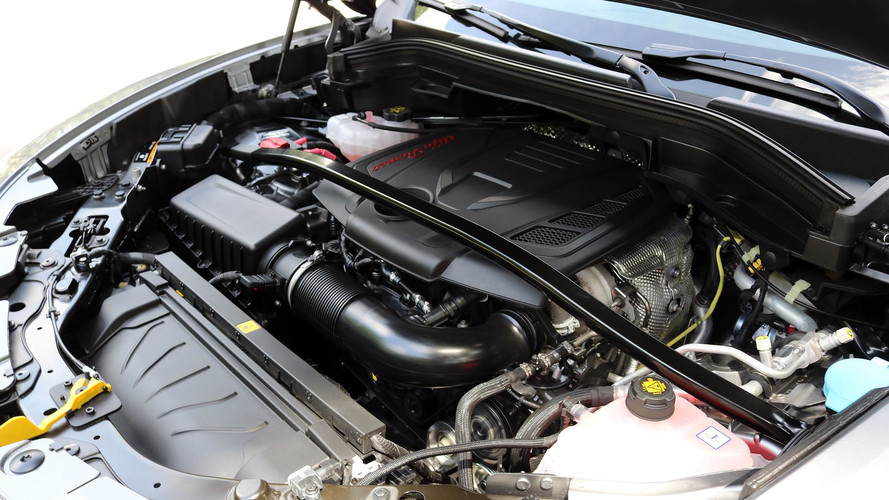 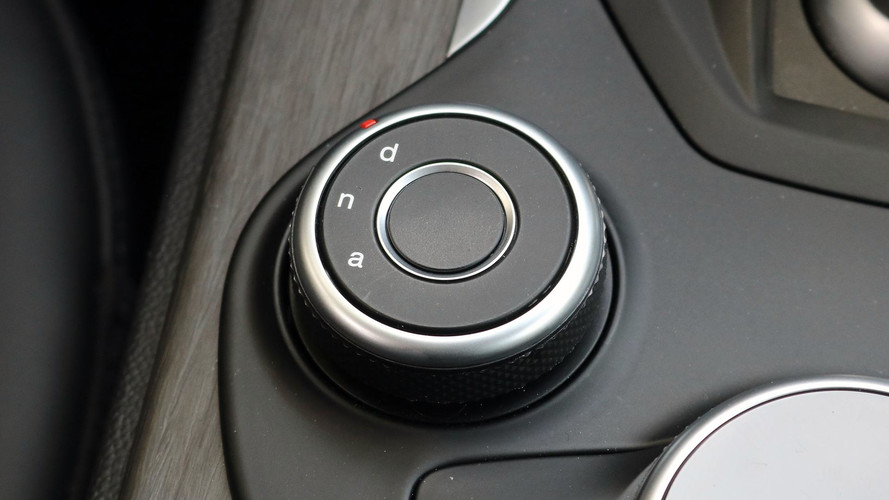 Alfa Romeo’s DNA drive-mode selector – Dynamic, Natural, Advanced Efficiency – helps drivers tweak the SUV’s character. N and A modes are self-explanatory, with the latter offering earlier shifts and a lazier throttle map. Dynamic engages an overboost mode (though Alfa says it does not produce any more power or torque, just quicker response), changes the feel of the electromechanical brake system, adds steering weight, and allows for more sliding before the stability control kicks in. You can’t ever disable ESC entirely, though.

Not that it will ever prevent you from having fun behind the wheel. The Alfa Romeo Stelvio elicits raised eyebrows from the first turn, with super-quick steering allowing uncommonly good turn-in for a crossover. It avoids twitchiness at speed, yet helps the 4,000-pound SUV feel nimble and darty. So too for the taut suspension and optional Brembo brakes, both of which clearly push the Stelvio toward the sportier end of the spectrum.

From the turbo engine comes a healthy dollop of torque arriving at just 2,000 rpm, yet it still pulls up toward its 6,200-rpm redline. Allowed independence in Drive, the ZF-sourced automatic transmission keeps the engine on the boil; use the paddle shifters in manual mode for remarkably prompt, hard gear changes that take as little as 100 milliseconds. More so than most similarly priced luxury crossovers, this one makes me charge hard toward the next bend, dive through switchbacks with abandon, and just generally be thankful I don’t have any kids or breakable cargo aboard. 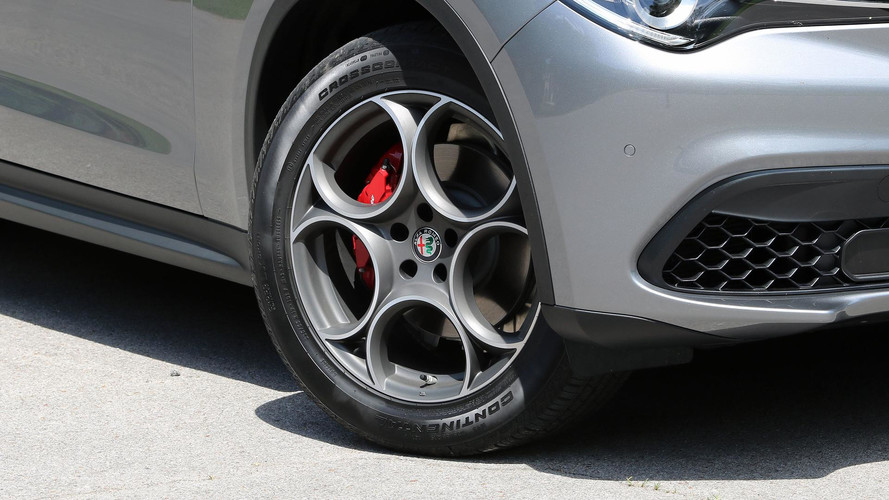 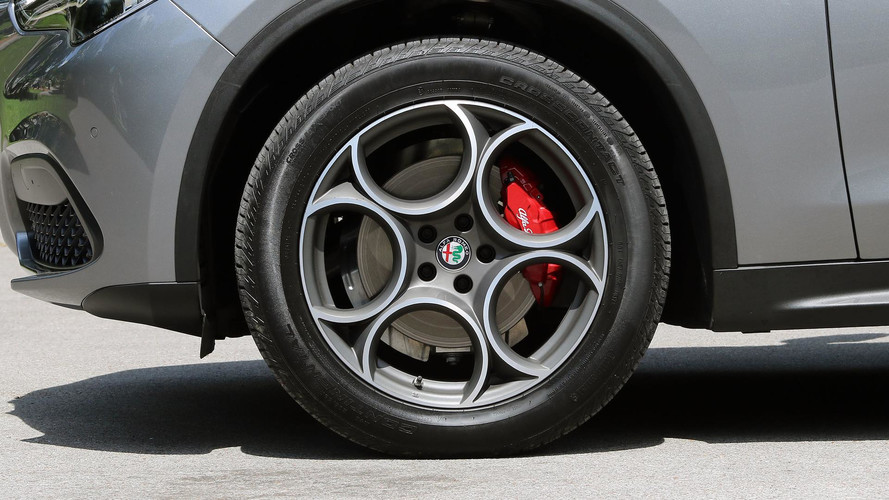 On up-level models, the leather seating and wood or aluminum trim deliver the visual and tactile impact expected of cars in this class.

The Stelvio is better to drive the more briskly you drive it. That means that in the city and suburbs, it’s still good but not quite perfect. What feedback and feel comes from the brake-by-wire left pedal is unpredictable and vague; it takes several stop signs to recalibrate your right foot. The 19- and 20-inch wheels on my test cars (18s are standard) ride firmly over cracked pavement. Turbo surging in the mid-range is distracting in leisurely driving, and off-the-line response is dull in Natural or Advanced Efficiency drive modes. But on the whole, little untoward noise or vibration, even from the standard stop-start function, makes it into the cabin.

Both front- and rear-seat occupants will find plenty of room in that cabin, though a tall adult sitting behind a tall driver might find legroom a little pinched. Out back, there’s 18.5 cubic feet of cargo room behind the second-row seats, on par with rivals even despite the sloped roof cutting into vertical volume, and you can fold the 40/20/40-split seat for a healthy 56.5 cubic feet of space.

On up-level models, the leather seating and wood or aluminum trim (both genuine rather than plastic imitations) deliver the visual and tactile impact expected of cars in this class. Yet lots of dull, ungrained gray plastic remains smattered around the cabin; coupled with the uninspired soft-touch dash topper that recalls something from a Ford Focus, it somewhat saps the feeling of specialness inside. Sport models also feature the same giant aluminum shift paddles as in the Giulia. They’re great for enthusiastic driving but do block your fingers from reaching the wiper and turn-signal stalks. 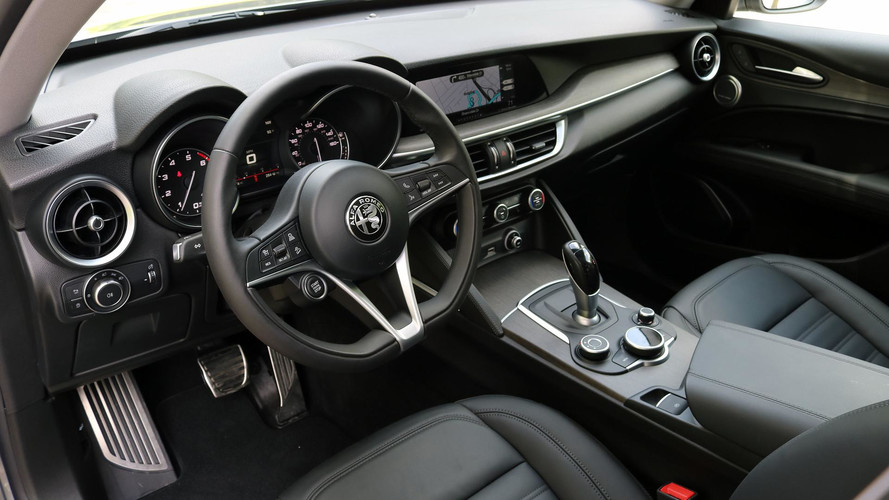 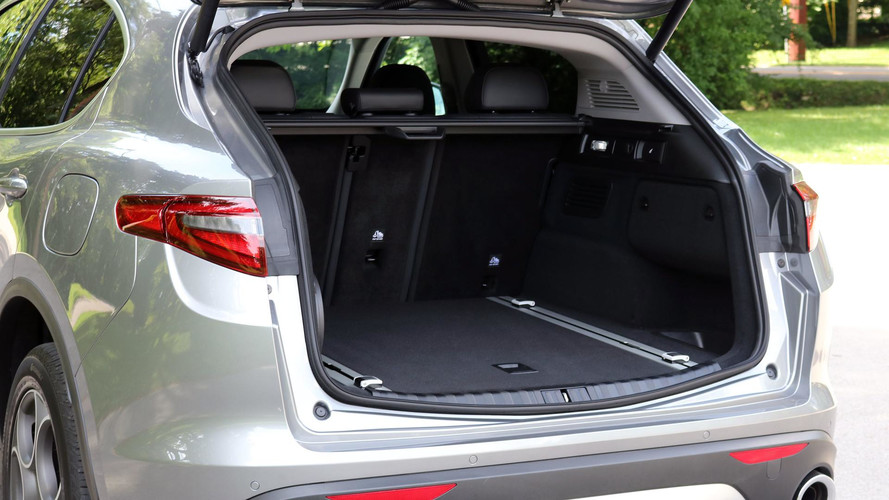 As has proven the case on the Giulia, the Ti trims are expected to be the volume sellers for the Stelvio. The Stelvio Ti Lusso pictured here lists for $54,490.

There’s a seven-inch color screen nestled between the analog tach and speedometer, too, which can show navigation, radio, speed, and trip computer information. But it’s not as impressive as and offers fewer features than the graphically intensive clusters on some German rivals.

Alfa Romeo’s 8.8-inch infotainment display (a 6.5-inch screen is standard) is operated by a rotary controller on the center console. Clear graphics and a succinct menu structure take little time to acclimate to, with navigation, Bluetooth calling and music, and voice recognition capabilities all baked in. There are two USB data points up front, plus two more charging points for back-seat passengers. Support for Apple CarPlay and Android Auto connectivity isn’t ready yet but should be available by October. The bad news is that those features cannot be retrofitted to Stelvio or Giulia models sold before then, because Alfa says adding the features requires hardware as well as software changes. 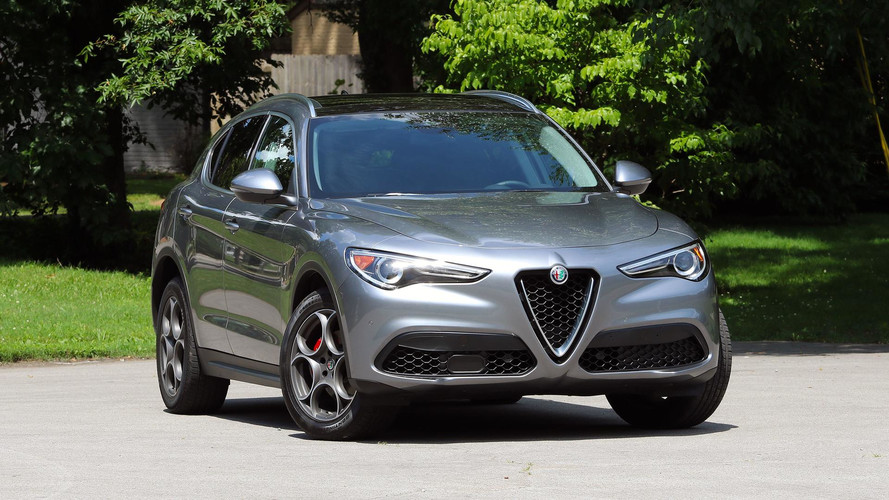 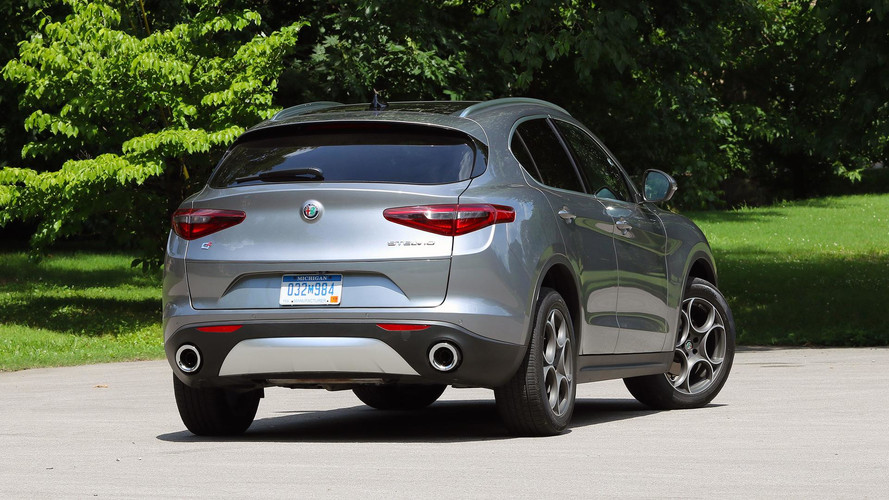 Where the Alfa Romeo Stelvio most distinguishes itself is with double-take sheetmetal and genuine driving excitement.

Climbing the trim levels doesn’t raise base prices too much, with the $43,795 Stelvio Sport, $43,995 Stelvio Ti, and then the $46,495 Ti Lusso (Luxury) and Ti Sport trims. The last two are distinguished by their details: Ti Lusso has 19-inch wheels, brushed-aluminum exterior trim, and a leather-wrapped dash and door panels; Ti Sport wears 20-inch wheels, gloss-black window trim, more bolstered sport seats, and paddle shifters. As has proven the case on the Giulia, the Ti trims are expected to be the volume sellers for the Stelvio. The reasonably equipped Stelvio Ti Lusso pictured here, for reference, lists for $54,490. Standalone options include a limited-slip differential and active suspension, a 14-speaker Harmon Kardon sound system, and a power liftgate.

A fire-breathing Stelvio Quadrifoglio is planned, with the same 505-hp 2.9-liter biturbo V6 as the Giulia Quadrifoglio, standard AWD, and various chassis upgrades. But it won’t be in showrooms here until the start of 2018; Alfa wanted to prioritize selling the more mainstream Stelvio 2.0-liter first.

Where the Alfa Romeo Stelvio most distinguishes itself is with double-take sheetmetal and genuine driving excitement. It’s easy to fall in love with an SUV that’s so good from behind the wheel and so oozing with curb appeal. Plus you get the cool factor of driving something that’s different than the myriad Audi, BMW, and Lexus crossovers in your neighborhood. The Stelvio isn’t perfect in every way, but it’s an incredibly strong effort from a newcomer brand. Couple that with competitive pricing and a healthy list of available features, and the Stelvio is the new must-test-drive option in its class.