2017 Alfa Romeo Stelvio First Drive: What will the Alfisti think?

Alfa Romeo's third salvo into the heart of the U.S. market appears to be on target.

One of the huge advantages of the Motor1 global network is that we’re building teams all around the world. Today, we bring you an early look at Alfa Romeo’s brand-new Stelvio. Here in the U.S., this model debuted at last year's L.A. Auto Show, but our colleagues in the U.K. have already gotten behind the wheel. Enjoy the preview, and expect a First Drive of the North American version in the not-too-distant future.

BMW, Mercedes-Benz, Porsche, Maserati, Jaguar and Bentley. All marques with a rich heritage in motorsports. All of them now producing SUVs, many of which are in such demand they break records as the best-selling models for their respective brands.

The latest to hit the road is the Alfa Romeo Stelvio, a close match in size with the BMW X3, Audi Q5 and Jaguar F-Pace, and a key weapon in re-establishing the brand in the United States. It's also named after one of the most evocative driving roads in Europe: the Stelvio Pass, a route that reaches an elevation of 9,045 feet (2,757 meters) and contains 75 hairpin bends. 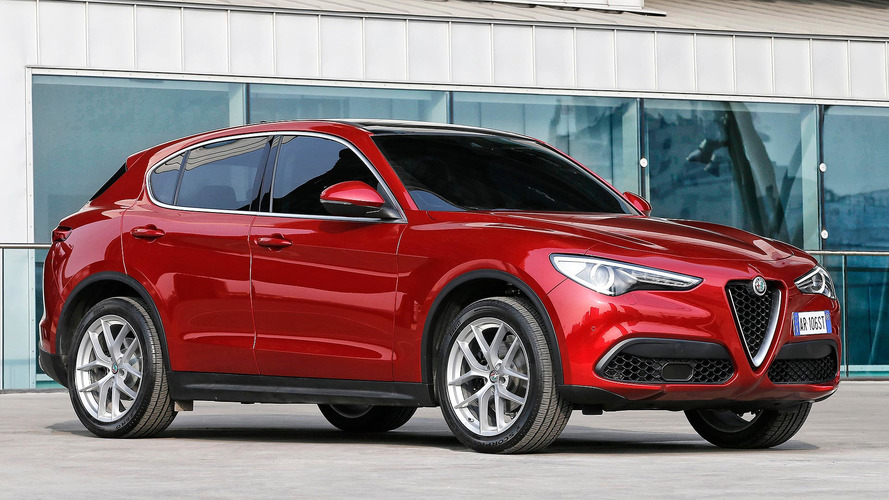 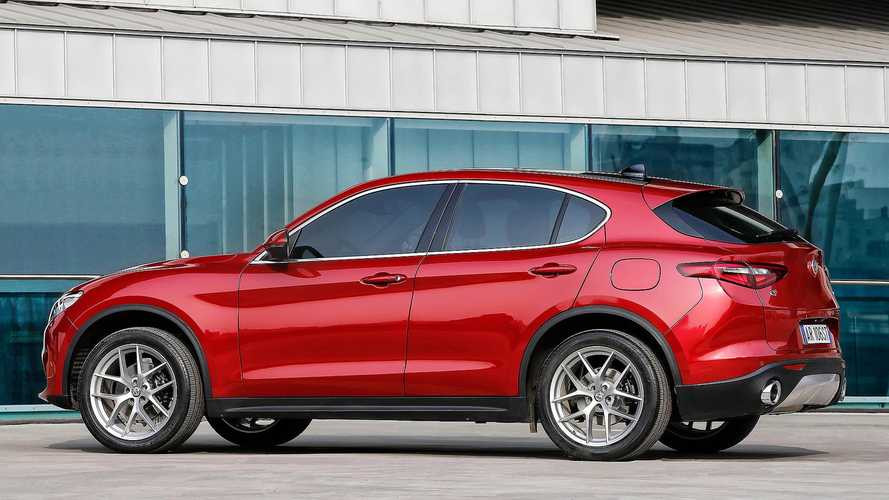 There must be traditionalists who resent the fact that Alfa Romeo has entered the SUV market to compete with premium brands, but rather than it being merely a pragmatic decision to create growth, bosses were keen to ensure the Stelvio looks and feels very much like an Alfa.

The Stelvio arrives a few months after the Giulia sedan, and shares its basic structure and technology. This is good news as the Giulia is a well-rounded and competent alternative to cars such as the BMW 3 Series, Audi A4, Mercedes-Benz C-Class, and Jaguar XE. The big challenge for Alfa is creating an SUV that meets the expectations of new customers, while remaining true to Alfa’s traditional values.

There must be traditionalists who resent the fact that Alfa Romeo has entered the SUV market.

The Stelvio that made its debut at the Los Angeles Auto Show in November 2016 was the high-performance Quadrifoglio, which uses the 505-horsepower, 2.9-liter biturbocharged V6 also found in the Giulia. That fire-breather was nowhere to be seen on our test drive, though it will be offered in the U.S. along with a 280-hp turbocharged 2.0-liter four-cylinder. Instead, we had our choice of what Europeans will get: a 210-hp 2.2-liter diesel or 280-hp 2.0-liter gas engine, both with all-wheel drive and an eight-speed automatic gearbox as the only transmission option.

Visually, the Stelvio is clearly related to the Giulia, despite its extra height. A short front overhang and long rear overhang are in keeping with sedan or coupe proportions, although both the front and rear tracks are wider, giving it a more purposeful stance, and the wheelbase is an identical 111 inches (2,820 mm). 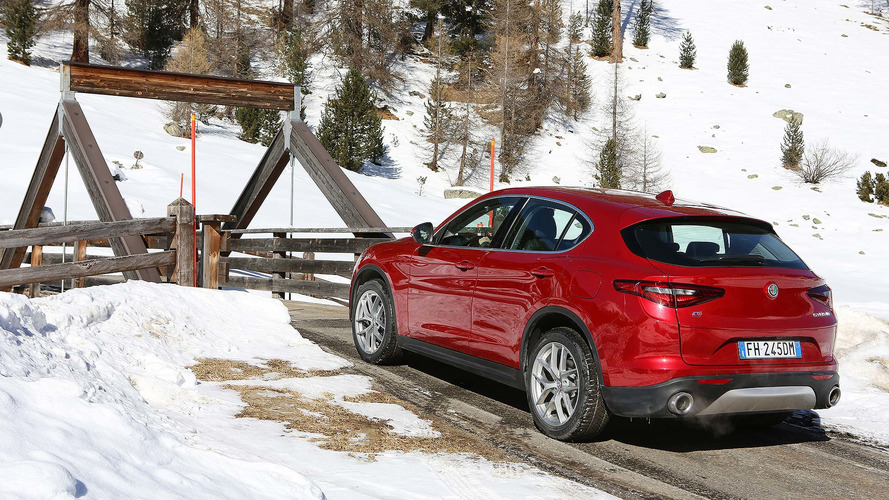 The latter puts the Stelvio slightly ahead of the Q5 and X3, and a little behind the GLC and F-Pace, although the interior is spacious enough for four adults in comfort, or five a bit more intimately, and the minimum cargo capacity of 18.5 cubic feet (525 liters) is pretty good.

The Stelvio’s steering is exceptionally direct, while the all-wheel-drive system has a rear bias with up to 50 percent of torque being sent to the front wheels when required for extra traction. It felt razor sharp on the twisty alpine roads of our test route, easily dispatching repeated hairpin bends with barely half a lock of steering and an impressive lack of body roll.

The eight-speed automatic transmission and flat torque curve of the 2.2-litre diesel (more than 331 pound-feet of torque is available between 1,500 and 3,000 rpm) ensured it almost catapulted along the next straight stretch of asphalt. The engine is perhaps a little noisier than four-cylinder diesels in the X3 and Q5, and the gearbox does like to ensure it holds a low gear for safety when heading downhill, with the resultant intrusion making us wish a little more sound insulation was used. 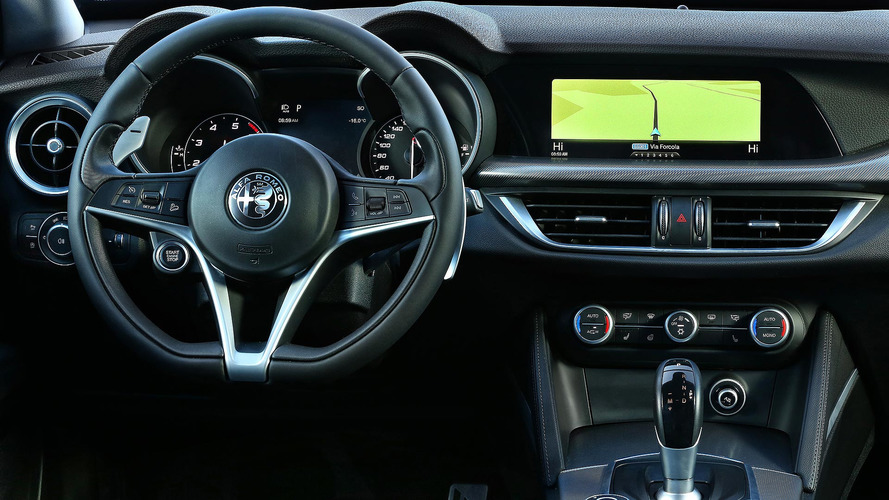 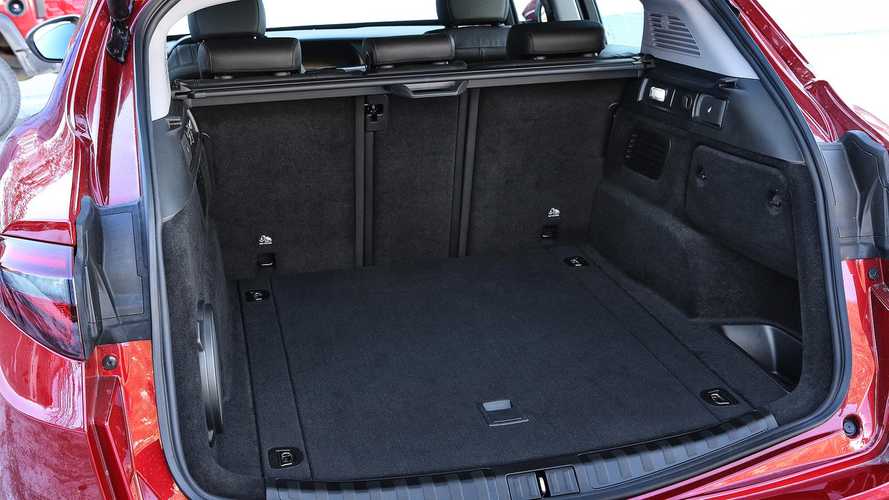 Although most Stelvios sold in Europe will be diesels, petrolheads over there will appreciate knowing the 280-horsepower gas engine doesn’t disappoint for performance with 0-62 mph happening in 5.7 seconds. But it doesn’t sound particularly special unless it’s at high revs – and with the low-down pulling power of the turbo, there isn’t really much need to go chasing the redline.

At higher speeds, the Stelvio remains exceptionally composed, resisting the urge to lean away from bends when cornering. The ride is on the firm side, and we wonder how this will feel on U.S. roads compared to the generally smoother ones on our test route.

It felt razor sharp on the twisty alpine roads of our test route.

Like all Alfas, the Stelvio comes with the ‘DNA’ system, which modifies the car’s responses and behaviour. ‘D’ stands for dynamic, creating a more acute steering and throttle, as well as less intervention from the electronic systems. ‘N’ is for natural, although the car feels lively enough even in this default mode. ‘A’ now stands for advanced efficiency (it used to mean ‘all weather’ when Alfa launched the system in Europe on the Mito and Giulietta), which maximizes energy savings. We don’t imagine any Stelvio driver would be too concerned with this mode.

Equipment levels are decent – the entry-level car has a 6.5-inch dashboard screen, DNA system, a central TFT info screen between the speedometer and rev counter (no fancy Audi-style digital instrument screen here), and a start button on the steering wheel, which makes us smile every time we push it. The alloy wheels are somewhat small on this model at 17 inches and the seats are fabric, but the safety systems include lane departure warning, forward collision warning, and autonomous emergency braking with pedestrian detection. 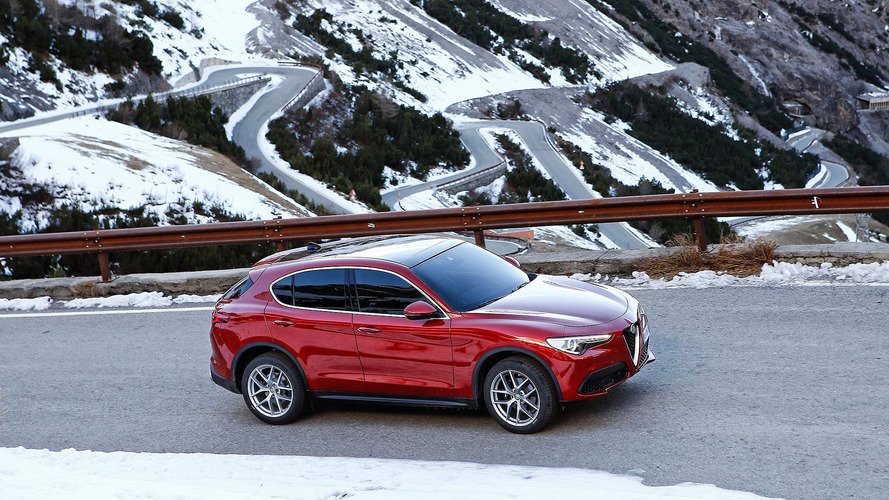 Higher versions come with xenon headlights, larger wheels, part-leather or leather seats, and other features. There are two main option packs – luxury and sport, both offering full leather but with different front seat designs, while the former offers wood dashboard and door inserts and the latter providing aluminum.

Prices will be revealed later in the year, although we expect cars like the Audi Q5 and Jaguar F-Pace to be squarely in Alfa’s sights.

Alfa knows how critical this latest generation of models is; the price of failure could be fatal. The Stelvio needs to be a runaway success. Fortunately, it seems to have the ingredients to succeed, and there are enough drivers out there in other cars who have a little benzina running through their veins.