Buyers shouldn’t be blinded by its resume.

The Nissan Rogue is popular, and I understand why. It took the last spot in last year’s list of ten best-selling vehicles in the U.S., all thanks to being a truly compelling value, on paper at least. Its relatively affordable price, large size, long list of features, and impressive fuel economy are all the ingredients an automaker needs for a hot-selling crossover. Then why do I have such a hard time recommending it? The answer lies in how all of those things come together, perform, and feel in the real world.

Big boy. The Rogue is big, nearly as big as some midsize crossover SUVs, though it’s still generally considered to be a compact in size. Compared to other popular compact crossovers, though, like the Toyota RAV4, Honda CR-V, and Ford Escape, the Rogue dwarfs the Toyota and Ford and about matches the much newer Honda. It’s taller, longer, and has a longer wheelbase than all three. That doesn’t guarantee the Rogue has the biggest interior in every dimension (the redesigned CR-V is also large and bests it in a few), but it’s among the leaders in most metrics. It’s also the only compact crossover to offer an optional third row of seating, though Nissan has told us fewer than 10 percent of buyers choose it.

Clever cargo. Speaking of the way back, I really like the flexibility of the Rogue’s Divide-N-Hide cargo management system. The rear cargo floor is composed of two pieces that cover extra storage space below. They can either lay flat for a normal floor or be configured other ways to suit different cargo situations. For instance, if you’ve gone grocery shopping but didn’t buy enough to fill the whole rear cargo area, you can flip up the first piece to create a smaller cargo hold near the door. Or, if you’ve got valuables stowed, flip the first piece up and lay the second on top to create a box only Superman could see through. Ingenious and simple.

Pricing prowess. The Rogue’s pricing compares favorably against most other compact crossover SUVs. At $23,820, its starting price is lower than those of the Toyota RAV4 and Honda CR-V ($24,910 and $24,045, respectively). The gulf in price gets even wider when you load them up. For instance, the starting price of a fully loaded Rogue like the SL AWD model I drove is about $2,000 less than a loaded CR-V Touring AWD and nearly $5,000 less than a loaded RAV4 Platinum AWD, despite few appreciable disparities in features. 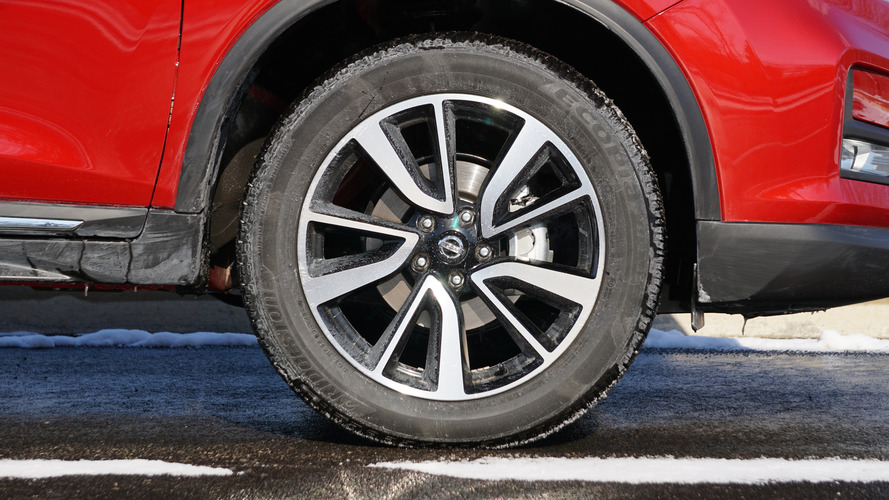 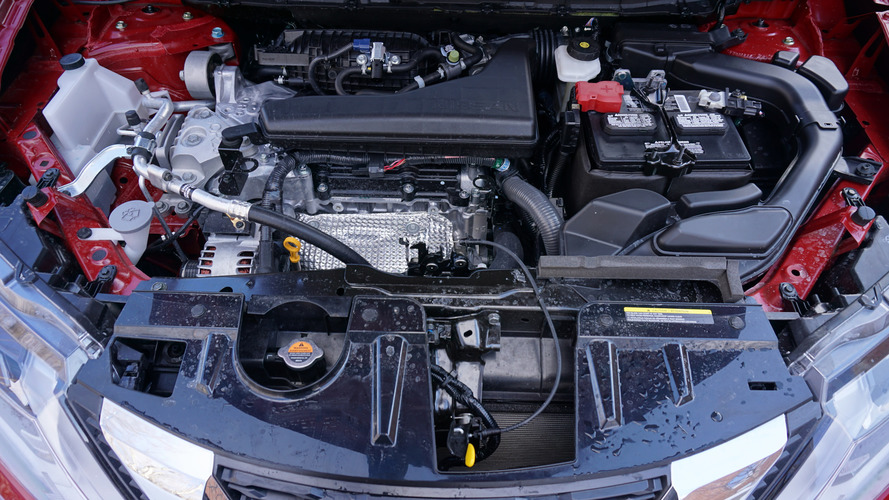 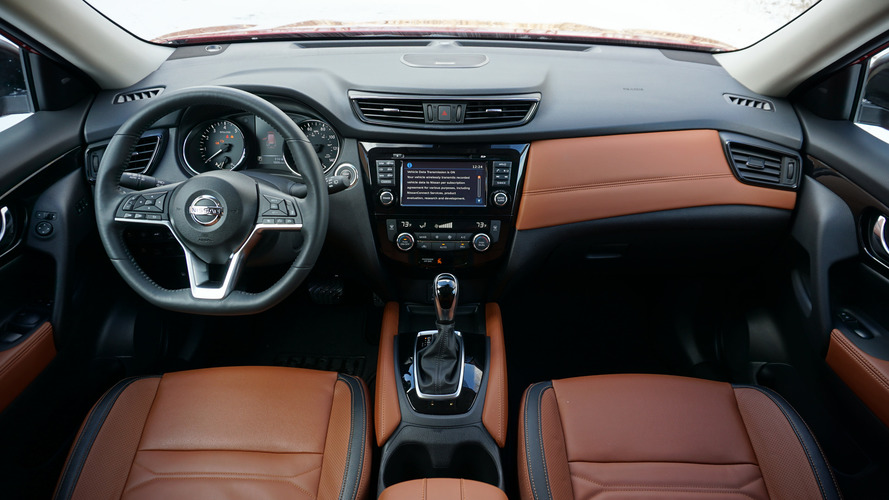 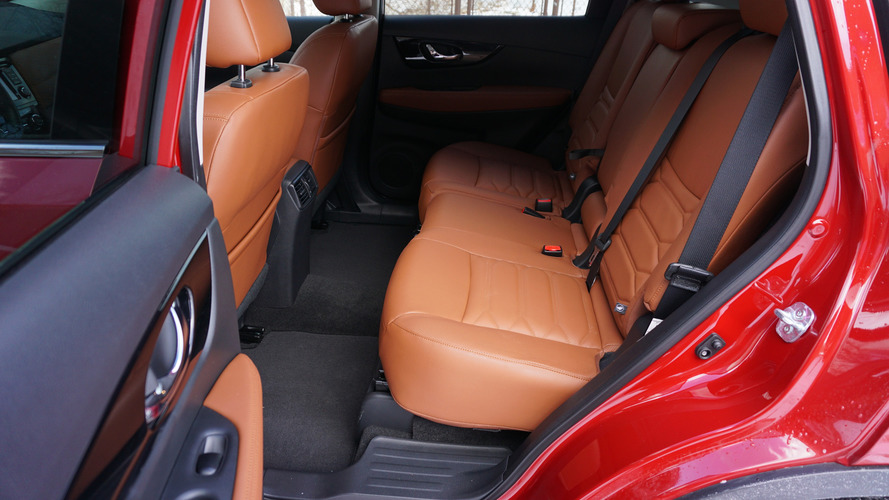 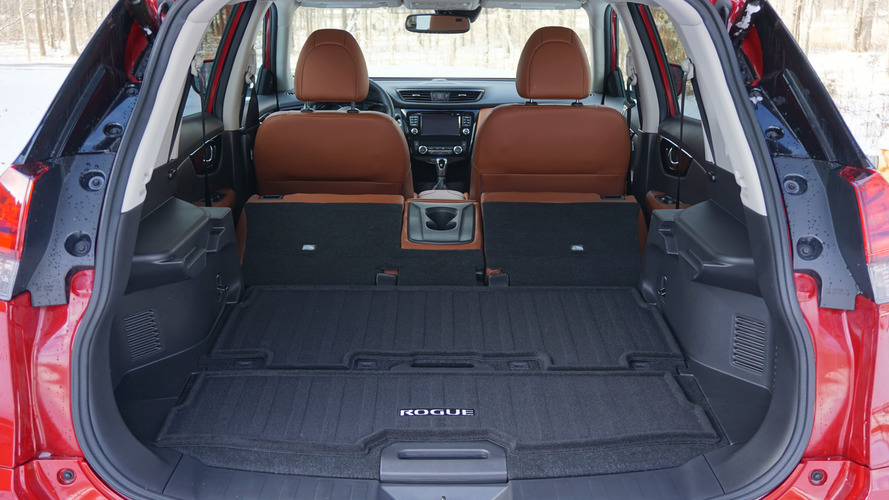 Feeling its age. I sound like a broken record having made this complaint about so many Nissans in the past, but the materials, switchgear, and technology inside the Rogue feel both out of date and of lower quality than the competition. I have this thought every time I turn a knob, press a switch, or look at a screen. The heated-seat buttons, for instance, are toggle switches rather than buttons, and the infotainment system has dated graphics and is slow to respond. Put another way, while Nissan fit the Rogue with the industry’s latest technology (except Apple CarPlay and Android Auto), it feels like they bought the cheapest versions of those technologies.

Little engine that can’t. As mentioned above, the Rogue is big for its class. It’s so big that its 170-horsepower 2.5-liter inline four-cylinder engine often feels outmatched by its girth. Some automakers also offer optional turbocharged four-cylinder or larger V6 engines that produce more power, but not Nissan.

CVT blues. Continuously variable transmissions are common these days, but there are two types: the awful variety and the kind that make you forget they’re a CVT at all. The Rogue’s is the former, and pairing it with an inadequate engine only makes things worse. The engine drones when accelerating, which isn’t unusual for a CVT. Because it has to work so hard, though, the engine is often operating at a high RPM, making the racket all but impossible for Nissan’s sound-deadening strategy to suppress.

Non-econ. Nissan quotes fuel economy figures of 25 miles per gallon in the city, 32 on the highway, and 27 combined, but you won’t often see 30+ mpg because the engine’s always working so hard to move this lug.