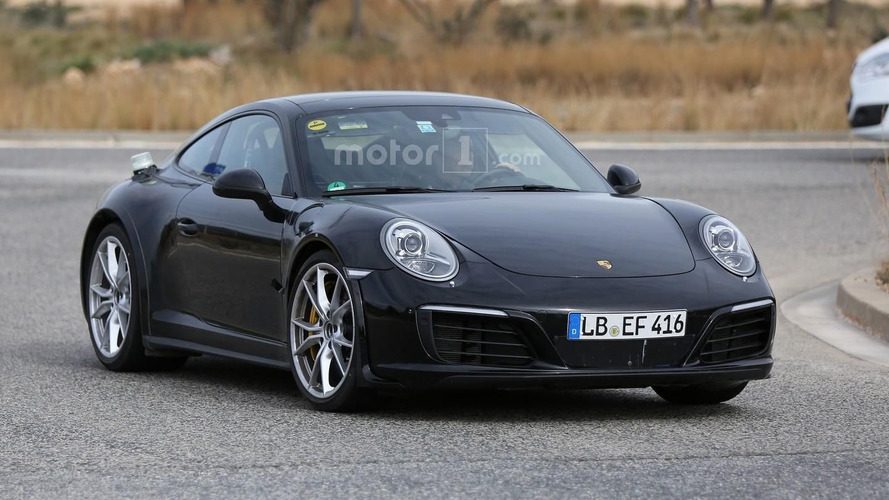 An interesting test mule of the next Porsche 911 has been caught on camera by our spy photographers.

An interesting test mule of the next Porsche 911 (992 generation) has been caught on camera by our spy photographers.

At a first glance this looks pretty much like a regular 911 Carrera 4 facelift (991.2), but if you look closely you’ll notice the front and rear wheel arches are a little bit wider. This indicates the next-generation 911 will have wider tracks that could have something to do with the already confirmed hybrid powertrain. The body of this test mule also has a variety of measuring equipment and on the inside there seems to be a roll cage.

That’s about it in terms of changes as this is only an early test mule, so expect additional modifications to occur on more evolved test cars. From what we know so far, the new Porsche 911 will ride on an updated version of the current MMB platform that could come with a slightly longer wheelbase which in return will add more room in the back.

In typical 911 fashion, don’t expect major design changes as Porsche will only make minor tweaks to its very successful recipe. Model's product line director Erhard Mössle said last year the 911 is “always an evolution, not a revolution” and it is always going to be “step by step.”

Even though Porsche is already working on the next-gen 911, the folks from Zuffenhausen are not done just yet with new derivatives of the current 991.2 generation. Judging from a set of spy pics we posted earlier this week, the next edition on the agenda is a hardcore 911 GT2 / GT2 RS.